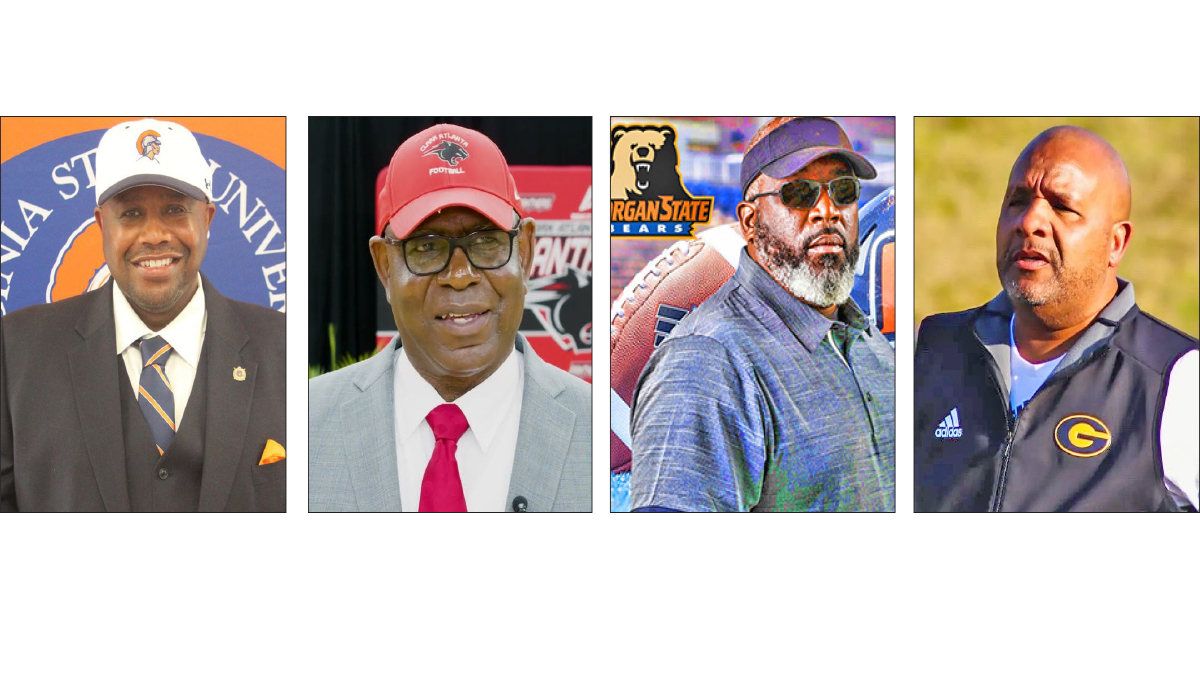 (L. to r.) Dr. Henry Frazier III at Virginia State, Willie Slater at Clark Atlanta, Damon Wilson at Morgan State and Hue Jackson at Grambling State are four of the 17 new HBCU head coaches who will debut this week. A full slate of 39 games is on tap. See the full list.

While there are a full 39 games this week in the real HBCU Kickoff to the 2022 black college football season, more than a third and nearly half of the games will have head coaches making debuts with new squads.

They include Damon Wilson, the former Bowie State head man who is the lone new head coach in the MEAC at Morgan State.

In the CIAA, former Bowie State, Prairie View A&M and North Carolina Central leader Dr. Henry Frazier III , who also played at Bowie State, is back in the CIAA. He is the new head man at Virginia State.

Robert Massey, who had head coaching experiences at Shaw, Livingstone and N. C. Central, enters his third year leading the Rams of Winston-Salem State but it will be his first with an interim tag removed.

The SIAC has the largest contingent of new head coaches with seven.

Kentucky State Athletics Director Ramon Johnson was introduced as the Thorobreds head coach in the preseason but its not clear whether he will shoulder those duties as the season begins.

JSU won the game 7-6 a year ago in the season-opener for both schools and went on to an undefeated season in the SWAC and the league championship. It was the only SWAC loss a year ago for Simmons’s Rattlers.

FAMU (0-1) opened Saturday in a 56-24 loss at UNC but went into battle without 25 players that were ruled ineligible or did not receive certification to play just two days before the game. How many of those players will play on Sunday was unclear at press time.

Jackson State is also facing a big hurdle. The city of Jackson, Ms. is dealing with a water crisis. The result is no running water, bathroom or shower use, and no air conditioning on the JSU campus. Sanders is struggling to find lodging and practice places for his squad.

Regardless of the challenges facing both teams, it is a game that will be watched for a number of reasons.

Frazier’s first game at VSU is at Lenoir-Rhyne this Saturday (6 p.m. ET). L-RU is tied for 19th in the preseason AFCA D2 poll.

Gibbs and FVSU debut against Ruffin and Tuskegee Sunday (6 p.m. CT, ESPNU) at the second annual Red Tails Classic in Montgomery, Ala. Porter (CSU) and Massey (WSSU) will also go at it Sunday (4 p.m. ET) at the Black College Hall of Fame Classic in Canton, Ohio.