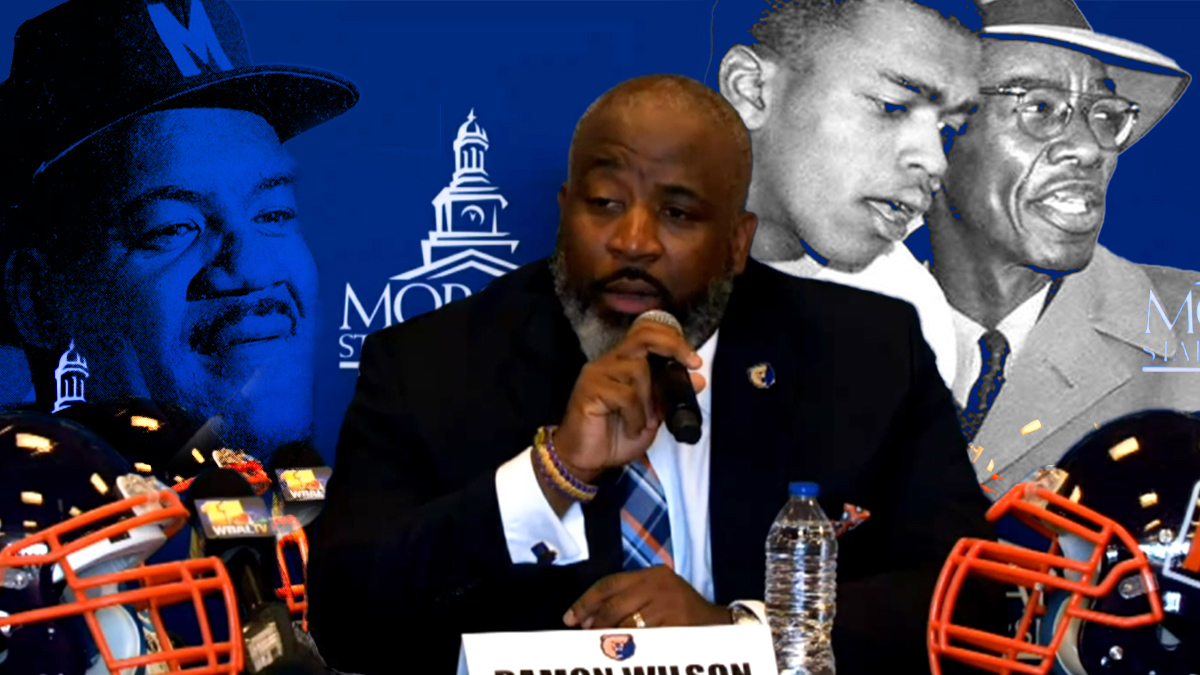 Morgan State has a proud football history, but it is buried under decades of mediocrity. Damon Wilson is ready to roll up his sleeves and get to work.

Morgan State University has one of the most decorated histories in HBCU football. But you would almost have to be a historian to know that.

New head coach Damon Wilson knows — and he’s looking forward to making some new history as well. Wilson was introduced as MSU’s new head football coach on Friday. The former Bowie State head coach acknowledged that there is plenty of work to do, but he didn’t think the job of turning the program around was impossible.

Wilson was flanked on both sides of the press conference by the people responsible for getting him the resources to turn the program around — Morgan State University President Dr. David K. Wilson and newly-minted Director of Athletics Dena Freeman-Patton. Both spoke glowingly of the new hire.

Dr. Wilson spent the first half of 2022 with his department of athletics looking to make hires at its two most critical positions — director of athletics and head football coach. The search was handled by Renaissance Consulting, but Wilson said he had an idea of the type of coach he wanted to take over the football program.

“We did not want to go through a period of experimentation. Show me what you’ve done, show me your track record and I will bet on the future based on that track record, any day,” Wilson said. “And so almost immediately when we heard that Damon Wilson had been reached out to and he expressed an interest, strong interest — that almost met my criteria right there. So I was very, very pleased that the interest was sustained.”

Freeman-Patton has only been on the job herself officially for a little over a week, but even before she started in her new role, she was already hearing about Wilson.

“He meets all of those criteria, a proven winner. And that’s what we need. He also can build a program. And to me, more importantly, he develops young men. And that is what we’re going to do. We’re going to develop young people here at Morgan State University.”

Morgan State was once one of the Crown Jewels of HBCU football. Its history rivals and even precedes HBCU football programs such as Jackson State, Grambling State and Tennessee State.

From 1929 through 1968, the program amassed 19 CIAA football championships — a number that has yet to be exceeded even though MSU left the conference more than half a century ago — under legendary head coaches Edward Hurt and Earl Banks. The program produced four future Pro Football Hall of Famers in that era as well. It won a pair of MEAC titles in the 1970s before falling into the abyss as the league transitioned to Division I football.

Wilson certainly has his work cut out for him. Morgan State has posted back-to-back winning seasons just once since helping form the MEAC in 1971 (the program went 7-5 and 6-5 in 2002 and 2003). The only title for the Bears since those early days of the MEAC came in 2014, when it was one of five schools to share a piece of the title. The program is 13-49 with no winning seasons since then — winning just four games in two seasons under Tyrone Wheatley.

Meanwhile, down I-95 in Prince George’s County, Wilson was busy making history. He returned to his alma mater after stints in the SWAC, and eventually built a winner. BSU went 89-45 under his leadership — making the CIAA title game five times in his last six seasons there and winning each of the last three championships. His 2019 team went unbeaten while his 2021 team made it to the Division II quarterfinals.

Now Wilson will look to forge a new foundation for Morganites to be proud of and opponents to respect. One that he hopes will match the school’s stellar academic reputation.

“The academic success is undeniable. But football — it’s questionable,” Wilson said with honesty. “We want to make sure we make the football program up to the standards of the academic program, and now you have a complete university. We understand what our task is, and I think the timing is right because these two people beside me.”

Timing is one thing that looks to be against Wilson and his staff’s favor, but he’s ready to roll up his sleeves and get going.

“It’s about what you do to with your two months,” Wilson said. “I may have had other plans going to into the summer, but I had to change my plans when I was fortunate and blessed with this opportunity and the guys are going to have to do the same thing.”