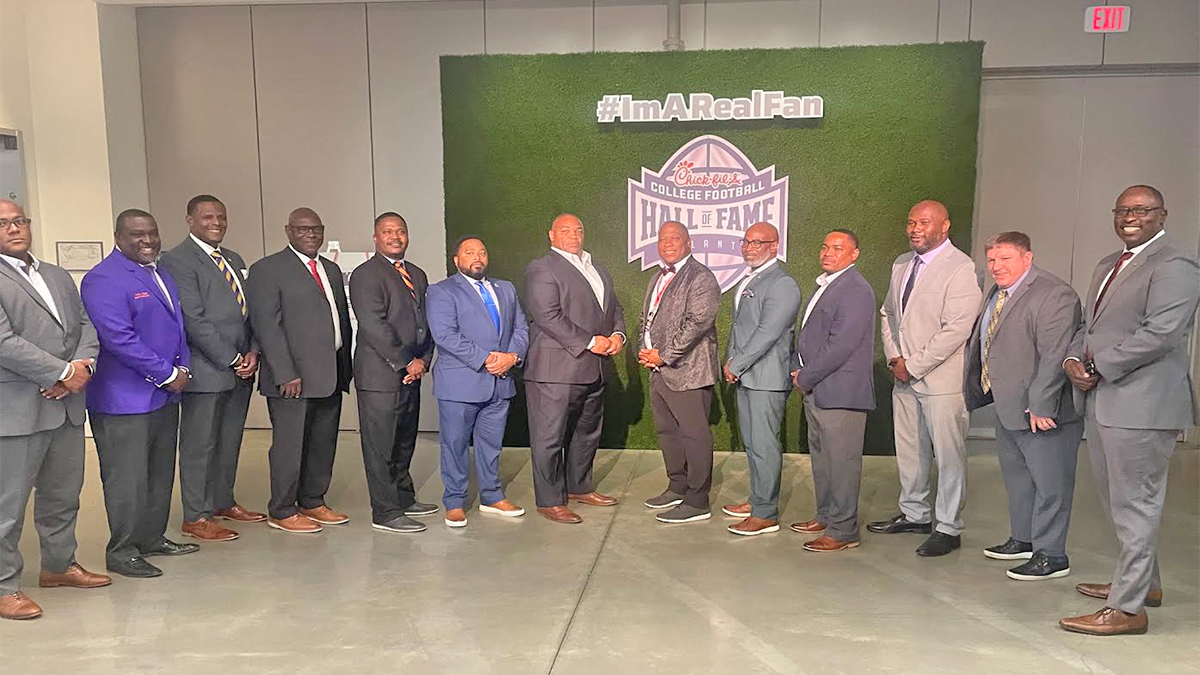 The 13 SIAC head football coaches pose in the lobby of the College Football Hall of Fame in Atlanta Wednesday at the 2022 Media Day. New head coaches at seven programs will make the 2022 season quite interesting.

ATLANTA, GA – Perhaps the top story at Wednesday’s 2022 SIAC Media Day at the College Football Hall of Fame was the crop of new head coaches that will grace the sidelines this season.

That likely overshadowed the fact that the conference has not named a replacement for longtime Commissioner Greg Moore, who announced in late May that he was stepping down after nearly 14 years leading the conference.

Nonetheless, the day went smoothly. Associate Commissioner for Communications Tyler Williams deftly handled the proceedings. Seven new head men were among the coaches that made their way to the stage in downtown Atlanta to be interviewed by host James Verett after sitting down with the various media outlets in attendance.

That’s new men at the helm of more than half the 13 SIAC programs. Of the current head coaches, Morehouse head coach Richard Freeman, in his 11th season leading the Maroon Tigers, now has the longest tenure at one school.

A brand new crop in the West

In an interesting twist, four of the five West Division programs have new faces at the helm. Two of them have moved from one conference program to another. Three in all are getting their second head coaching assignment in the league. All three come with conference championship credentials.

The shake-up of sideline mentors had little bearing however on who the head coaches and sports information directors voted to win division titles (watch here). Albany State in the East and Miles in the West are picked to repeat.

Here are profiles of the new coaches. Let’s begin with those that have SIAC titles.

Slater posted a sterling record of 110-29 (.791) with six seasons of double-digit wins and another four nine-win seasons in his first 12 seasons at Tuskegee. He had only one losing campaign in those dozen years. That stretch included seven SIAC titles and nine West Division titles.

But over the last three seasons, his Golden Tigers were just 13-18, never finishing above .500. Maybe, the double duties of coach and AD caught up to him. He’ll only have to focus on coaching the Panthers.

Slater, who said he has been calling plays since the 10th grade, said he won’t be calling plays for the Panthers. “Well, they embarrassed me at Tuskegee. They said I’m old and my play-calling skills are old and all that stuff. So, rather than have any controversy, Coach (Richard) Moncrief is our offensive coordinator.”

Reginald Ruffin: Taking on the double duties at Tuskegee

The double-dip of head football coach and AD at Tuskegee has now been taken on by former Miles head coach Reginald Ruffin. He also served in both capacities for the Golden Bears. Ruffin has said he will spend just one year in both jobs before surrendering the coaching duties.

Ruffin had two stints as an assistant at Tuskegee under Rick Comegy ((2002-2003) and Slater (2006-2010) before becoming head coach at Miles in 2011. He spent the last 11 years leading a resurgence for the Golden Bears challenging and often overcoming Slater and Tuskegee in the SIAC’s West Division. He won the last three West titles, six overall, and corralled four conference championships leading Miles.

“For me it’s a blessing,” Ruffin said of returning to Tuskegee. “Because the three winningest top coaches in the history of Tuskegee – Cleve Abbott, Rick Comegy and Willie Slater, – I was fortunate to coach under two of them. That’s a blessing for me that propelled me in my career as a coach because of what I leaned from those guys.”

Tuskegee and Ruffin, coming off a 3-8 record in Slater’s last season, open against Fort Valley State in Montgomery, Alabama on Sun., Sept. 4 at the first annual Red Tails Classic.

New Central State head coach Kevin Porter was last in the league in 2019 completing the last leg of a four-year stint (2016-19) leading Fort Valley State. Porter guided the Wildcats to the SIAC title in his inaugural season, 2016.

The Marauders, who changed coaches from Bobby Rome to interim head coach George Ragsdale during the 2021 season, are coming off a 1-9 campaign. Porter will make his CSU coaching debut on Sunday Sept. 4 against Winston Salem State at the Black College Football Hall of Fame Classic in Canton, Ohio. The game will be televised on the NFL Network.

“The opportunity to play on national television at the Hall of Fame game is impetus for the football team and the program to get out there and start on the right foot and do a great job of representing the university,” said Porter during a sit-down interview with this reporter at the SIAC Media Day. “The University obviously has tremendous tradition as far as the football program goes and I want to make sure our kids understand that tradition, where that comes from and what we’re planning.”

The Marauders won three NAIA Division II national championships from 1990-95, and were runner-up in 1983 while competing in NCAA Division II.

Stepping into the formidable shoes of Ruffin at Miles is Sam Shade, who grew up in Birmingham before playing at Alabama and in the NFL. He has been a state championship high school coach in Alabama and has also coached on the collegiate and NFL levels.

“I grew up ten minutes away from Miles College,” Shade said from the stage at SIAC Media Day Tuesday. “In fact, my father lives eight minutes away. I’ve got two sisters that graduated from Miles and a nephew that actually played at Miles. I actually played coach Ruffin. I’m very familiar with the program and I’m very excited about the opportunity.”

Miles was 6-4 overall, winning the West with a 4-2 record before falling to Albany State in the championship game, 31-0. Shade debuts at Alabama State on Sat., Sept. 3.

Aaron Kelton, a Boston native, takes over at Savannah State from Howard where he was the defensive backs coach and recruiting coordinator. He also served as interim head coach at Howard in 2019.

“The city of Savannah, the university, its rich history, the great climate and to be able to play in a conference like the SIAC is what really attracted me,” said Kelton of his coming to SSU. “We’re at the end of a transition period in the program. We’ve lost guys to graduation and all those different kinds of things. So we’re excited, and a little anxious to see what we can do.”

Shawn Gibbs comes to Fort Valley State after working the last 19 years as running backs at NC Central, Grambling and NC A&T. He also was assistant head coach and running backs coach under Rod Broadway and Sam Washington at N. C. A&T. But he’s quite familiar with the SIAC.

“Well, I’m a third-generation black college product, so I’m familiar with HBCUs in general,” Gibbs said. So, I’ve known about the SIAC forever. I know it’s tradition-filled. I know it has a lot great coaches, a lot of great players and a lot of history.”

That experience will be critical as he takes over a Wildcats’ program that finished 5-5, 3-3 in the SIAC last season under Maurice Flowers.

Apparently taking on some degree of head coach/athletics director’s duties is Kentucky State’s Ramon Johnson. Johnson, who just completed his first year as AD, introduced himself as the interim AD and acting head coach. Interestingly, he brought KSU offensive coordinator Paul Hamilton to join him on stage to talk about the team.

After back-to-back seven-win seasons, Charlies Jackson left Kentucky State to become assistant head coach and defensive backs coach at Air Force. The Thorobreds were 7-4 overall while finishing second in the West at 4-2 in the SIAC.

“What we wanted to do is to provide some consistency for our student athletes and our athletic program,” said Johnson on stage at Wednesday’s SIAC Media Day. “Coach Hamilton has been very instrumental in helping me navigate those waters making sure that we’re able to retain a great number of our student/athletes from last season.”

Johnson was non-committal about whether he will be on the sidelines when the Thorobreds open at Fort Valley State on Sunday, Sept. 11. “Well, at this particular point what I can say is that Kentucky State will continue to move in a positive direction.”