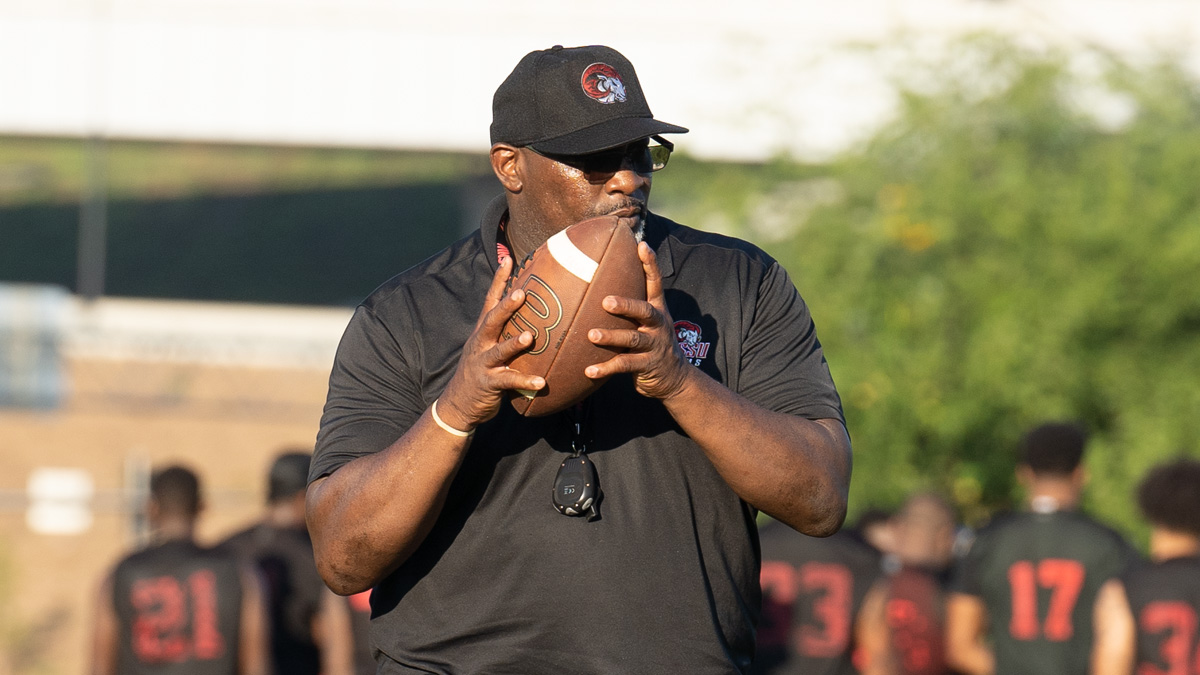 WINSTON-SALEM, N.C. — It’s said that you never get a second chance to make a first impression, but Winston-Salem State head football coach Robert Massey may prove to be an exception.

Having served as an interim coach since April 2019, that title has been removed. Massey is now the true No. 1 man for the Rams on the verge of a season-opener on Sunday. There’s no more uncertainty for either him or his players because they know he’s not in a temporary role.

“As a parent, you look for stability for your child, so if you go work for a man and he only has that job for a year, you don’t know what you’re going to be doing next year,” Massey says. “But this man now has a job for four years and you know if you come in and do what you’re supposed to do, you have an opportunity to go there for four years, get your education and be part of turning this thing around and being part of a winning program.”

The Ramily, as Winston-Salem State’s fans are known, is hungry to see that turnaround, and the sooner the better. After a disappointing 2021, the Rams want to earn the program’s 13th Central Intercollegiate Athletic Association championship as well as the first crown since 2016.

Whether it’s positive exposure depends on how far Winston-Salem State has put last season behind it. Massey believes he has the talent to change the team’s fortunes. He has more players than he had last season, in part because he recruited the immediate area and also secured some transfers. The offense features a combination of small wide receivers expected to run past the secondary as well as big wide receivers he hopes will run over the cornerbacks and safeties.

From the backfield, Massey has brought in bigger running backs to bolster a ground game that averaged 148 yards a game last year but had trouble picking up key yards when needed.

“We were a small team. We couldn’t run the ball,” Massey says. “We couldn’t pound and get three yards and a cloud of dust when we needed to, so we found ourselves in positions where we trying longer field goals than we should or trying to go for it when we didn’t have the personnel, and that’s just the reality of it.”

Massey hasn’t chosen a starting quarterback yet. His choices are down to Dominique Graves and Richard Lattimer, both of whom are graduate students. The coach says both players will see action against Central State, and after Sunday the choice of a permanent starter may become clearer.

Graves threw for 1,328 yards and eight touchdowns last season for Winston-Salem State. Latimer is playing for his third HBCU after stops at Bethune-Cookman and Fayetteville State.

Winston-Salem State won’t know a lot about its opponent because Central State’s coaching staff migrated from Fort Valley State before this season. He said the Marauders brought in new players and kept the nucleus of a defense that appears to have struggled to stop opponents; Central State went 1-9 last season, giving up 37 points a game.

While there may be some mystery to what Central State can do, Massey suggests there’s no mystery to his own mission. The Ramily wants to hoist another trophy and the quest commences under a national spotlight with a coach who is secure in his position.

“It’s my first game as the official head coach and not the interim, so we want to start that thing off right” he says.