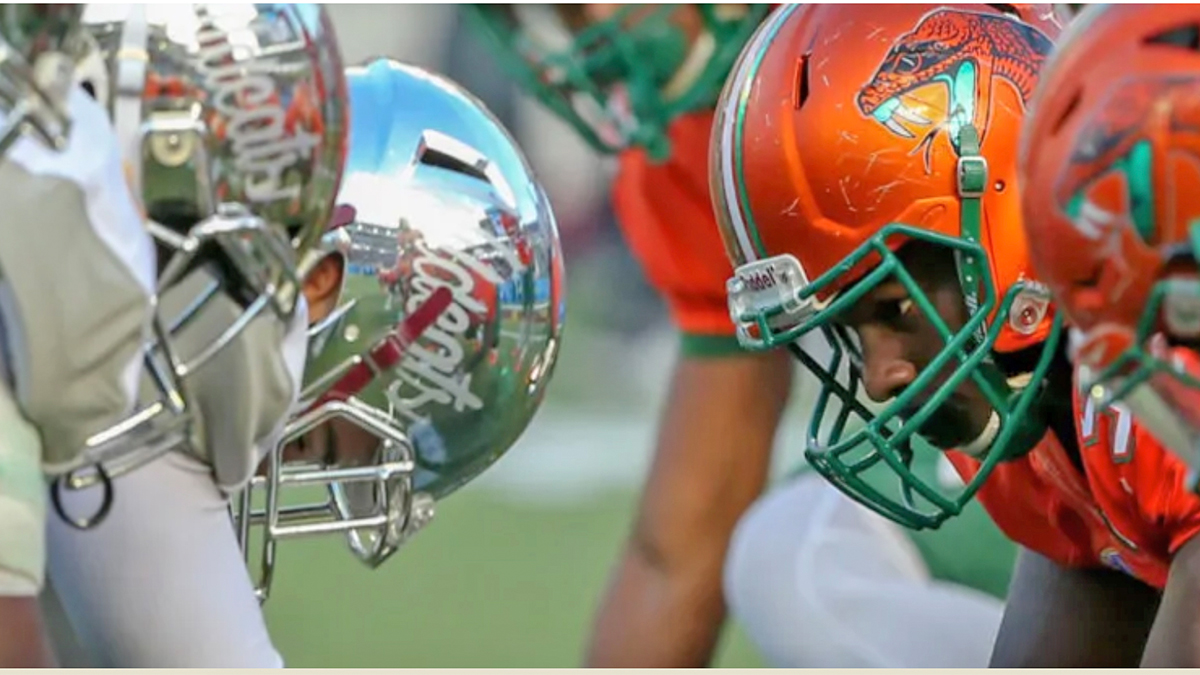 2022 begins the 130th year of black college football and 40 Classic Games are a special part of the celebration. Florida A&M vs. Bethune-Cookman (above) is one of the fiercest. Check out the complete list.

If there were a dictionary entry for ‘HBCU Classic football games,’ it would read – special.

That would describe the 40 games (see list below) – most of them with the word ‘Classic’ attached – that appear on HBCU schedules in 2022. But they can also be designated as Showdowns, Challenges, Bowl or Championship games.

They are part of the celebration this season of 130 years of Black College Football. Michael Hurd says in his 1993 book entitled Black College Football, 100 Years of History, Education, and Pride, that this African-American national pastime as one colleague describes it, began when Biddle College (now Johnson C. Smith University) traveled to Salisbury, NC to face Livingstone on an ‘open field’ on Dec. 27, 1892. It was called a “match game of ball.”

That game is celebrated each year as the Commemorative Classic. It will be played this year at Livingstone’s renovated Alumni Stadium on Nov. 5. The Blue Bears venue will feature a new track, video scoreboard and new artificial turf recolored in Livingstone Blue.

Games such as this have evolved into a Classic phenomenon that embodies African American history and culture, achievement and accomplishment, pageantry and tradition.

One hallmark of all these Classic Games is there’s always an element that makes them unique.

Classic games can be held to honor a legendary or special individual in black college football history.

That would be classic games named for coaching legends like Willard Bailey of Virginia Union (vs. Va. Lynchburg on Sept. 1), Pete Richardson of Southern (vs. Florida Memorial on Sept. 3), W. C. Gorden of Jackson State (vs. Grambling State on Sept. 17), Louis Crews of Alabama A&M (vs. Austin Peay on Sept. 17), Eddie McGirt of Johnson C. Smith (vs. Lincoln, Pa. on Sept. 24) or John Merritt of Tennessee State (vs. Lane on Oct. 1).

Classics can denote special rivalries, especially those of the backyard, in-state variety. Most are played at neutral sites and draw the largest crowds to these venues.

They include a game previously known as the Aggie-Eagle Classic that was played in Raleigh, N. C. from 1994 to 2005. It pits the NC A&T Aggies against the NC Central Eagles, teams in North Carolina separated by just 45 miles on Interstate-85.

While it is a guaranteed sellout when played at on-campus stadiums, it re-emerges this season as the Duke’s Mayo Classic in Charlotte, NC Panthers’ Stadium, home of the NFL’s Carolina Panthers. They go at it this year on Sept. 3.

The next three Classic Games constitute games that annually draw the biggest crowds. They usually finish in the top three attended games and pump millions of dollars to local economies.

The Magic City Classic between SWAC rivals Alabama State and Alabama A&M is as fierce as they come. It annually draws in excess of 60,000 fans to Birmingham’s legendary Legion Field. Last year Alabama State’s head coach Donald Hill-Eley was let go after a MCC loss.

It will be played this year on October 29.

The Florida Classic pits Sunshine state stalwarts and new SWAC rivals Florida A&M and Bethune-Cookman each November. Last year’s game packed 54,198 into Orlando’s Camping World Stadium on Nov. 20 – the third largest HBCU crowd of the year. It saw FAMU end a nine-game losing streak to B-CU with a dominating 46-21 win over the Wildcats.

The season-ending Bayou Classic, played in New Orleans’s Caesars SuperDome each November, always plays to crowds of over 50,000 fans. It pits intense Louisiana SWAC rivals Southern and Grambling State. It drew 55,791 fans to their Nov. 27 battle in 2021, the second-largest HBCU crowd of the year. Grambling prevailed on a last-minute field goal last year, 29-26 to tie the series at 24 games each.

With new coaches in Southern’s Eric Dooley and Grambling’s Hue Jackson in their first Bayou Classic as head coaches, the intensity and crowds may be even larger at their 49th showdown on Nov. 26 this season.

The old and the new

Some of the classics have long histories. Some are brand new.

The Orange Blossom Classic began in 1933 and was played continuously from 1947 to 1978. Hosted by Florida A&M University and the Rattlers’ legendary coach Alonzo “Jake” Gaither, it was held at the Orange Bowl Stadium in Miami and also included a huge parade through Miami’s black Overtown section. Held at the end of the season, it was, in effect, a black college national championship game.

The OBC drew between 40,000 to 50,000 fans during the peak of its popularity from the 1950s through the early 1960s. The game drew thousands of white fans, many came to see the always skilled Gaither-led teams and the FAMU band, the Marching 100. It was the first football game to showcase black football players at the Orange Bowl.

Prior to 1947, blacks were not allowed to attend or participate in games at the Orange Bowl due to strict Jim Crow segregation laws at the time. The only African Americans allowed at the stadium were employees, who had to carry identification cards.

The OBC triumphantly returned in 2021 as a season-opener, and matched new SWAC rivals Florida A&M and Jackson State.

Last year’s game ended in a 7-6 win for Jackson State and was the beginning of JSU coach Deion “Coach Prime” Sanders’ run to an undefeated SWAC season and league championship. FAMU head coach Wille Simmons’ squad however gave Sanders’ team a serious run for its money. Expect more of the same this season.

Sanders and Simmons agree the game is so big it should be on ESPN (not on ESPN2 where it is expected to air.) They will clash on Sunday, Sept. 4 again at Hard Rock Stadium in Miami Gardens, Florida

The Morehouse-Tuskegee Classic that pits SIAC rivals of the same name is one with a longer history. It began in 1902 as an entertainment event for the African-American civilian community and U.S. Army soldiers in the Columbus-Fort Benning, GA and Phenix City, AL area.

The game had been played since 1936 at A. J. McCllung Stadium in Columbus, Georgia. But this year, on Oct. 8, it will shift to Legion Field in Birmingham.

It will be the 86th meeting between the schools.

Classics return this season to St. Louis and to East Rutherford, New Jersey.

The HBCU New York City Football Classic is the special game that will premier at MetLife Stadium in East Rutherford on Sept. 17. Howard and Morehouse will tangle in this year’s Classic which is being helmed by Derrick Moore of Sports 1105. The New York Urban League Classic had formerly played at the venue, then called the Meadowlands, as well as at Yankee Stadium from 1968 thru 2012.

The Gateway Classic, an annual football game between HBCUs, began in St. Louis in 1994 and grew under the leadership of the late Earl Wilson Jr. The classic basically died when Wilson passed in 2010.

The city is back this year as host for the St. Louis River City HBCU Football Classic that will see Alabama A&M and Arkansas-Pine Bluff meet inside The Dome at America’s Center on Sunday, October 16. The Dome, formerly known as the Trans World and Edward Jones Dome, was the former home of the NFL’s St. Louis (now LA) Rams.

As usual, Eric Moore of onnidan.com is the guru of all things HBCU sports and his yearly HBCU Composite Football Schedule of team-by-team, weekly, homecoming, conference and classic games was indispensable in compiling this info. Continue to get well, Eric.

Howard vs. Harvard in Washington, DC