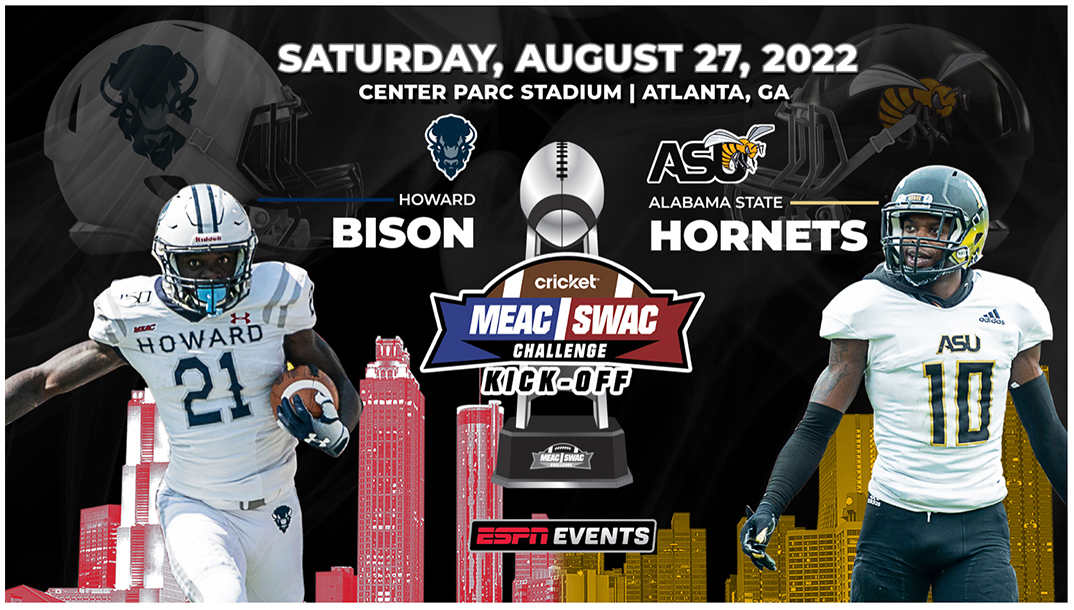 Howard vs. Alabama State in Atlanta at the MEAC/SWAC Challenge tops the three-game Week Zero schedule in HBCU football.

The much-anticipated 2022 black college football season gets underway this weekend with three games.

These pre-Labor Day games are called Week Zero as only a special few debut this week. The real kickoff is next week when a whopping 39 games involving black college teams jump off.

Florida A&M’s eligibility issues that put its game Saturday with North Carolina in jeopardy has grabbed all of the spotlight. But there’s another game Saturday that will be watched just as closely.

It’s good that the Mid-Eastern Athletic Conference acronym MEAC is first in the name for the season-opening Challenge as that conference has dominated play in the series since it began in 2005.

MEAC representatives have an 11-4 edge over the Southwestern Athletic Conference entries in the 16 years the game has been played (See breakdown below – the 2016 game was suspended because of inclement weather in the second quarter.). That includes last year’s 23-14 win by the MEAC’s North Carolina Central over the SWAC’s Alcorn State.

That’s without mentioning that the MEAC also has a 5-1 edge over the SWAC in the season-ending Celebration Bowl that pits the two league’s champions.

So it could be said the MEAC owns the beginning and end of matchups with the SWAC over the last 16 years. To get a real gauge on how the conferences have done against each other, games played in between these season-opening and season-ending contests would have to be included.

Save that for another time.

HBCU football: The showdown in Atlanta

Today, it is the MEAC’s Bison of Howard University versus the SWAC’s Hornets of Alabama State University at Atlanta’s Center Parc Stadium at 7 p.m. The game will be carried live on ESPN.

It’s a matchup of up-and-comers in both conferences and should tell us a lot about how both teams may fare in their respective leagues.

Bison head coach Larry Scott was in his first year in 2021. Despite his team finishing 3-8 overall, 1-4 in the new six-team MEAC last year, he and the Bison showed a lot.

Howard lost two of its conference games by single digits – 15-12 to eventual MEAC champion South Carolina State on the road in Orangeburg, S.C. and 30-23 on the road at Delaware State.

The Bison came up a couple of touchdowns short hosting Norfolk State (a 45-31) loss. Their biggest loss was at home to eventual conference runners-up North Carolina Central, 45-27. The Bison led that game 14-7 in the first quarter, put up 461 yards of total offense but surrendered 293 rushing yards and 530 total years to the Eagles in the loss.

What they showed in those games was a competitiveness and discipline which bodes well as they head into the 2022 season.

The Bison this season

Despite being picked fifth in the six-team MEAC in preseason voting, the Bison placed eight players on the preseason first and second all-MEAC teams.

Scott has senior quarterback Quentin Williams back at the controls of the Bison offense. Williams threw for over 2,300 yards and for 16 TDs with 7 interceptions last season. Antoine Murray, a preseason first team all-MEAC selection is expected to be his favorite target.

The biggest jump will have to be made in the defense led by first team selections Darren Brokenbur on the D-line and Kenny Gallop in the secondary.

It kind of galls Robinson, who played 11 years in the NFL after a stellar career at Alabama State, that his beloved SWAC has fallen behind 11-4 to the MEAC in their showcase head-to-head competition. And he rarely misses an opportunity to make noise about it.

“. . .You are what your record says you are,” Robinson told Kendrick Marshall of HBCU Sports back in June. “I can’t say that today, but we definitely want to turn that around. So I think I think it’s one of those things where we’re playing for Alabama State, but we’re playing for the conference and we have to kind of restore order because the SWAC is the preeminent HBCU conference in the nation.”

Robinson hearkens back to a time when the SWAC was dominant over the MEAC. In 1991, he finished his career at ASU with a 36-13 clobbering of the MEAC’s N. C. A&T in the season-ending Heritage Bowl. He gets a chance to right the SWAC ship in his debut game leading his alma mater.

Most of the preseason noise at ASU has been about Auburn transfer quarterback Dematrius Davis, a former 4-star recruit, who may be ASU’s biggest ever transfer addition. But he’s not the only one. Robinson added Arkansas lineman Ray Curry, UConn tight end Jayce Medlock and Colorado wideout La’Vontae Shenault among others.

They’ve been added to a roster that includes standouts Irshaad Davis at defensive back and offensive lineman Robert Alston.

Robinson, along with new Grambling State head coach Hue Jackson, is the latest NFL product to join Jackson State head coach Deion “Coach Prime” Sanders in the SWAC coaching ranks. Whether the Hornets can make a big jump under Robinson like JSU has done under Sanders is the big question that everyone is asking. There will be some indication of that after Saturday’s game.

The rest of the schedule

The other two games on this week’s schedule involve Florida schools.

Florida A&M, the co-favorite with Jackson State in the SWAC, has a special date in Chapel Hill vs. ACC member UNC (8 p.m. on the ACC Network). The game is dubbed the HBCU Celebration Game and will honor HBCU coaching legends Bill Hayes, Rod Broadway and Rudy Hubbard. Additionally, FAMU’s famed Marching 100 band will perform at halftime and join with UNC’s Marching Tar Heels in pre-game and halftime performances.

HBCU Gameday sat down for an interview with Bill Hayes prior to Saturday’s game.

Willie Simmons’ Rattlers will be huge underdogs but the game should give an indication of how much FAMU has improved and is ready to again challenge Sanders and JSU as they did a year ago in a 7-6 opening game loss. FAMU meets JSU next Sunday (Sept. 4) at the Orange Blossom Classic in Miami.

The other game Saturday is dubbed the Big Cat Classic and matches Florida Memorial against Edward Waters in Miami Gardens, Fla.