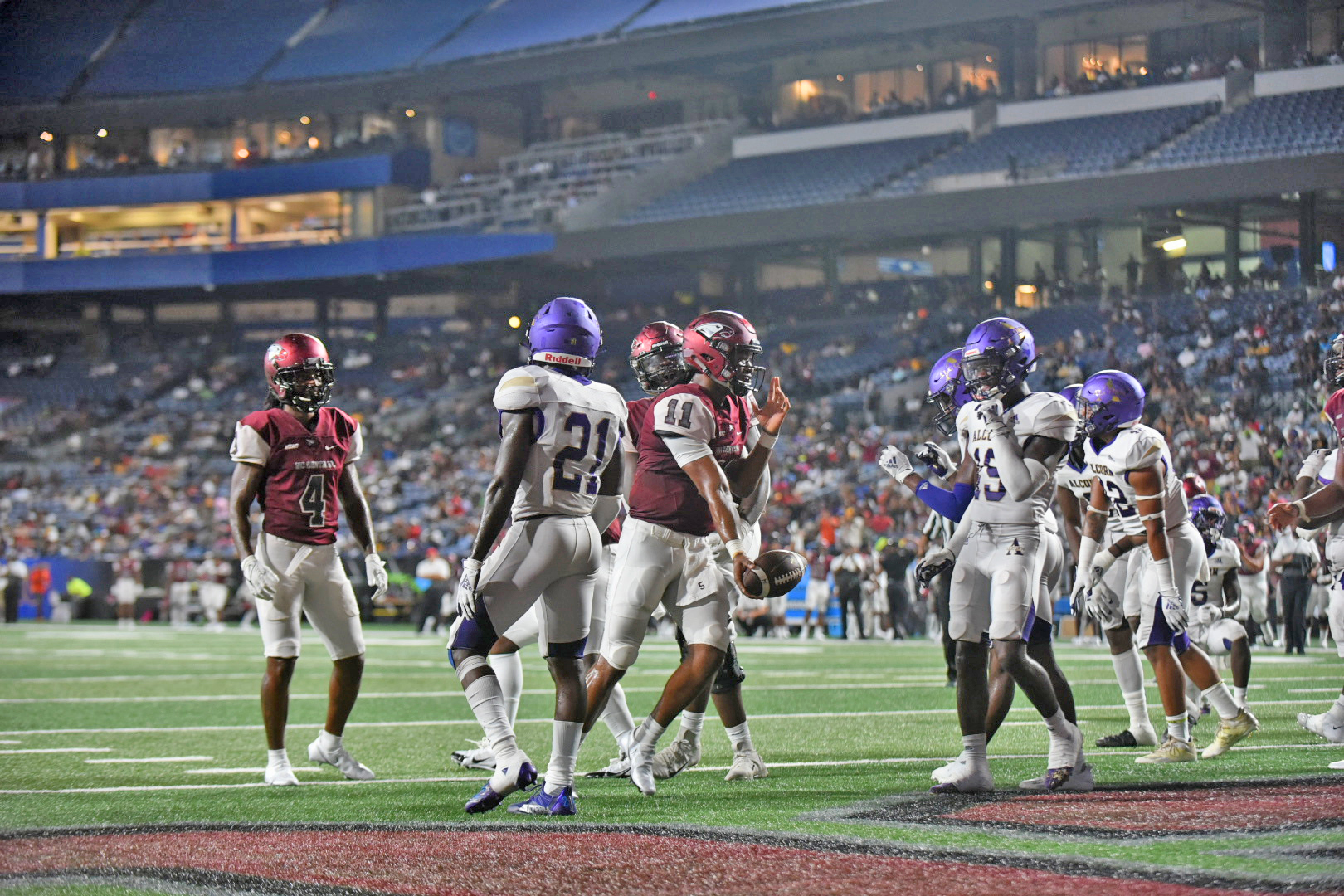 North Carolina Central came in the game as a 14-point underdog and left the MEAC/SWAC Challenge with a statement win.

ATLANTA – Second-year NC Central head coach Trei Oliver had been telling anyone who would listen before the MEAC/SWAC Challenge that his team was not the same one that finished 4-8 in 2019 and lost its final two games by a combined score of 99-0.

There may be some believers now after his Eagles knocked off and shocked SWAC West Division favorite Alcorn State 23-14 and the 15,210 fans on hand at the 15th MEAC/SWAC Challenge at Center Parc Stadium that kicked off the 2021 HBCU football season here Saturday evening.

It was the 11th win for the MEAC in the 15 MEAC/SWAC Challenge games that have been played and perhaps none has been more unexpected.

“This is not the same team as in 2019,” said Oliver on the field after the game echoing his mantra from the preseason. “This is a new season and a new team. We (the MEAC) have been dominating in Atlanta for 14 years. We play good football in the MEAC.”

Richard scored on two short runs and managed the offense well completing 16 of 25 passes for 184 yards in the win. He was named the game’s offensive MVP.

Harper completed 17 of 27 passes for 154 yards and the two Alcorn scores, but those were the only ones the Braves could manage.

After giving up a touchdown on the game’s opening drive, the Eagle defense shutdown the once-powerful Alcorn State offense that averaged 34 points per game in 2019. They only allowed one second half Alcorn State touchdown while their offensive counterparts put up 16 points. NCCU outgained the Braves 391 to 343 yards for the game.

The pivotal play in the game was turned in by NCCU sophomore DB/KR Brandon Codrington who brought back a fourth-quarter punt 77 yards to paydirt early in the fourth quarter.

Both teams sat out the fall 2020 and spring 2021 seasons and came in with different perceptions and expectations. While NCCU was picked to finish third in the MEAC, Alcorn State, who had won six straight SWAC East Division titles, was the top pick in the SWAC West. The Braves were moved to the West to make room for former MEAC members Bethune-Cookman and Florida A&M who move into the SWAC East this year.

Early on, it looked as if those perceptions were reality as Alcorn took the opening kickoff and methodically marched 65 yards in ten plays to score on Harper’s 20-yard pass to Juan Anthony Jr. The Braves had several chances in the first half to pull away but could not capitalize.

The Eagles finally put together a scoring drive just before the half, covering 57 yards in eight plays to score on Richard’s 6-yard draw play up the middle. After Adrian Olivo’s PAT, the Eagles tied the game at 7 with just 23 seconds left in the half.

Seizing the momentum after the late score, the Eagles and Richard came out on fire. They took the second half kickoff and drove 75 yards in eight plays to take its first lead of the game 13-7 on a 2-yard run by Richard. The sophomore ran for 17 yards and running back Jamal Currie Elliottalso had a 20-yard run setting up Richard’s score. Olivo’s PAT was blocked leaving the Eagles up 13-7 with 10:25 left in the third period.

The team’s exchanged possessions before NCCU punter Juan Velarde mishandled a snap deep in his own territory with Alcorn State recovering at the Eagles’ 28-yard line. Niko Duffey ran 10 yards down to the nine to set up the Braves with first-and goal. On fourth down, Harper hit Duffey on a pick play in the left end zone for a score. Thompson’s PAT put the Braves back in front 14-13 with 2:19 left in the third period.

The Eagles responded quickly as they drove 64 yards in eight plays to retake the lead at 16-13 on Olivo’s 28-yard field goal at the 13:29 mark. After stopping Alcorn on a 3-and-out, Codrington brought back the punt for the deciding score.

Stadford Anderson had a big 68-yard run and finished with 128 yards on 11 carries to lead the Braves. Anthony had five receptions for 66 yards to lead the Alcorn wideouts.

Alcorn State falls to 0-2 in the MEAC/SWAC Challenge. NCCU is now 1-1.