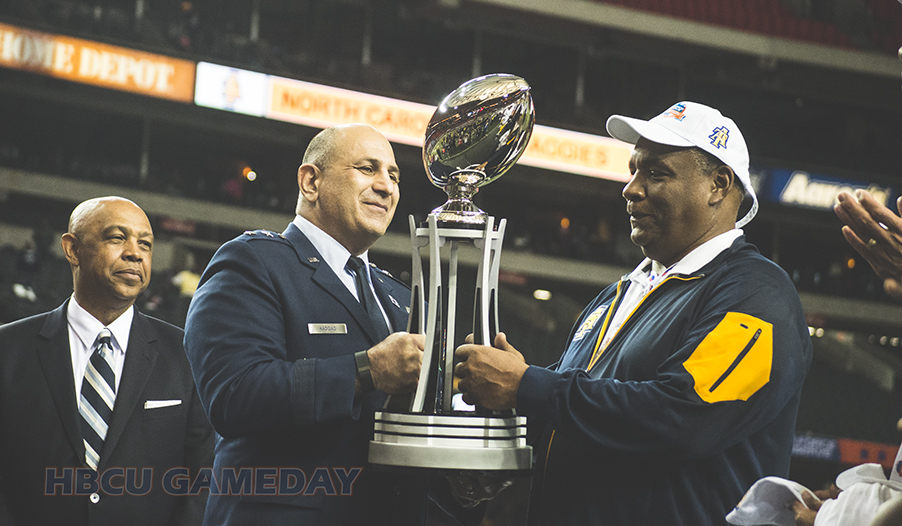 CHAPEL HILL, N.C. _ The season-opening football game between Florida A&M and North Carolina (UNC) will cap a weekend of various activities celebrating HBCUs, according to the athletic department at the state’s flagship university.

Former Tar Heel defensive tackle Rod Broadway will be honored along with legendary coaches Bill Hayes and Rudy Hubbard at the HBCU Celebration Game on Aug. 27 at Kenan Memorial Stadium in Chapel Hill. Hayes, Broadway and Hubbard will serve as honorary captains for the game.

With a 59-22 record, Broadway left North Carolina A&T after seven seasons with the school’s best winning percentage and second all-time with 59 wins, 41 of them in the Mid-Eastern Athletic Conference.

The 2017 season was especially notable because the Aggies went 12-0, making them the first MEAC and HBCU Division I-AA school to post an untarnished record. That season ended with a victory in the Celebration Bowl, the second time in three seasons the Aggies had won the battle between the MEAC and the Southwestern Athletic Conference.

Broadway also won two Central Intercollegiate Athletic Association West Division titles at N.C. Central as well as a championship at Grambling State of the Southwestern Athletic Conference. While an assistant to Steve Spurrier at Florida, he coached the defensive line that was instrumental in earning the Gators the 1996 national championship.

Hayes, who also coached at A&T as well as Winston-Salem State, is a member of the Black College Football Hall of Fame. He won four CIAA championships while coaching the Rams, and three MEAC titles while leading the Aggies. He leads both schools in career coaching wins.

The football field at Winston-Salem State’s stadium is named in Hayes’ honor.

Hubbard, who last year was inducted into the College Football Hall of Fame, won 83 games as FAMU head coach. His team made history in 1978 by winning the NCAA Division I-AA national championship by beating Massachusetts. He is the sixth Rattler inducted into the hall.

Fans sticking around at halftime will get to see the FAMU Marching 100, which will join the Marching Tar Heels. The two bands will also have a pre-game performance, the school said.

On the Friday before the game, HBCU Heroes is hosting a Career Fest at Great Hall, UNC said. It’s described as a diverse hiring event welcoming those seeking jobs and internships. Amazon, Warner Bros. and Discovery will be among the companies conducting interviews, according to the school.

Vinnie Rock, formerly of Naughty By Nature, will host a tech talk, and several Greek sororities and fraternities will hold a stroll off, the school said.

UNC’s news release also said organizers would add more events, but there was no response to a phone call seeking additional details on what those events might be.