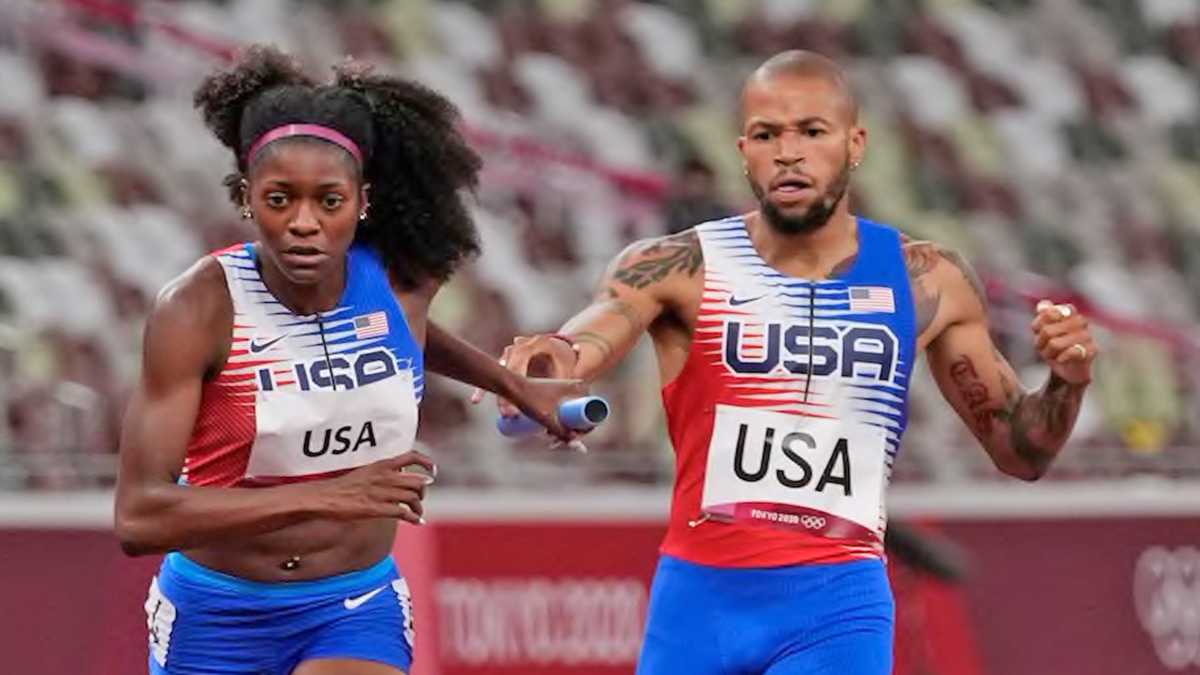 NC A&T’s Trevor Stewart (shown above) has scored an historic medal at the Tokyo Olympics. As the Games wind down, a few more HBCU athletes are alive to do the same.

The results so far have not been sterling, or golden for that matter, but HBCU athletes at the Tokyo Olympics still have some opportunities to make a mark.

Both will have second opportunities to secure gold at the end of the week.

Here’s how the HBCU athletes have fared so far.

U. S. champion Quanera Hayes ran a time of 51.07 seconds to advance in the women’s 400 meters heats Tuesday. Hayes finished behind Great Britain’s Jodie Williams 50.99 in the heat.

Hayes can run faster. She won the national title at the U. S. Olympic trials in season’s best time of 49.78.

Allyson Felix of the U. S., competing in her fifth Olympics, won her heat in a time of 50.84 to advance. Wadeline Jonathas of the U. S. also advanced with a second place finish in her heat in 50.93 seconds.

Coppin State sprinter Joseph Paul Amoah, running for his native Ghana, advanced out of Tuesday’s men’s 200 meters first round with his season’s best time of 20.35 seconds. Amoah was in the seventh and final heat, finishing third behind U. S. champion and defending Olympic champion Noah Lyles (20.18) and Sibusiso Matsenjwa of Switzerland (20.34).

Kenneth Bednarek (20.01) and Erriyon Knighton (20.55) of the U. S. won their heats and advanced. The top three in each heat plus the next three fastest advanced to the semifinals.

Unfortunately, Amoah would not make it past the semifinals.

Stewart, who earned his place on the U. S. Olympic team by finishing fourth in the 400 meters at the Olympic trials, did not run in Friday’s first round. The U. S. team finished first Friday in their heat in 3:11.39 but had to overcome a disqualification as Taylor Manson was ruled to have taken the baton out of the zone. That disqualification was later overturned allowing the American team to advance.

In Saturday’s final, Stewart ran the leadoff leg in 44.9 – the second-fastest on the team – to match some of his best times this season. The team however, was nipped at the tape to finish third in 3:10.22. The gold medal went to the quartet from Poland (3:09.87) and the silver medal foursome from the Dominican Republic (3:10.21) finished just ahead of the U. S.

North Carolina A&T sophomore Randolph Ross Jr., who had run the fastest 400 meters time in the world this year (43.85 seconds) in winning the men’s NCAA championship, could only post a time of 45.67 Sunday and finished fourth in the second heat of the opening round of the 400 meters.

Running out of lane nine in heat two, Ross had a lot of ground to make up coming off the final turn. After getting to third in the last 15 meters, he appeared to ease off at the finish. Ross did not advance as his time fell three-hundredths of a second out of advancing to the semifinals.

“That was terrible,” Ross told NBC after the race.

The top three in each heat and the six next fastest times advanced. Ross’s was the eighth fastest. Ricci Petrucciani of Switzerland ran 45.64 in the same heat to finish ahead of Ross and knock him out of the competition.

Ross Jr. was the only of the three Americans in the 400 meters that did not advance to the semifinals.

Saint Augustine’s Tia-Adana Belle, running for her native Barbados, advanced out of Sunday’s first round of the women’s 400 meters hurdles with a second-place finish in her heat in a time of 55.69 seconds.

Belle ran considerably slower in Monday’s semifinals finishing eighth in 59.26. World record holder Sydney McLaughlin of the U. S. won the heat in 53.03. Belle seemed to struggle over the eighth hurdle and did not advance.

Former world record holder Daliliah Muhammad of the U. S. won the first 400 hurdles semifinal in 53.30 Monday to advance to the finals. Southern Cal’s Anna Cockrell also earned a spot in finals with a second-place finish in her heat in 54.17.