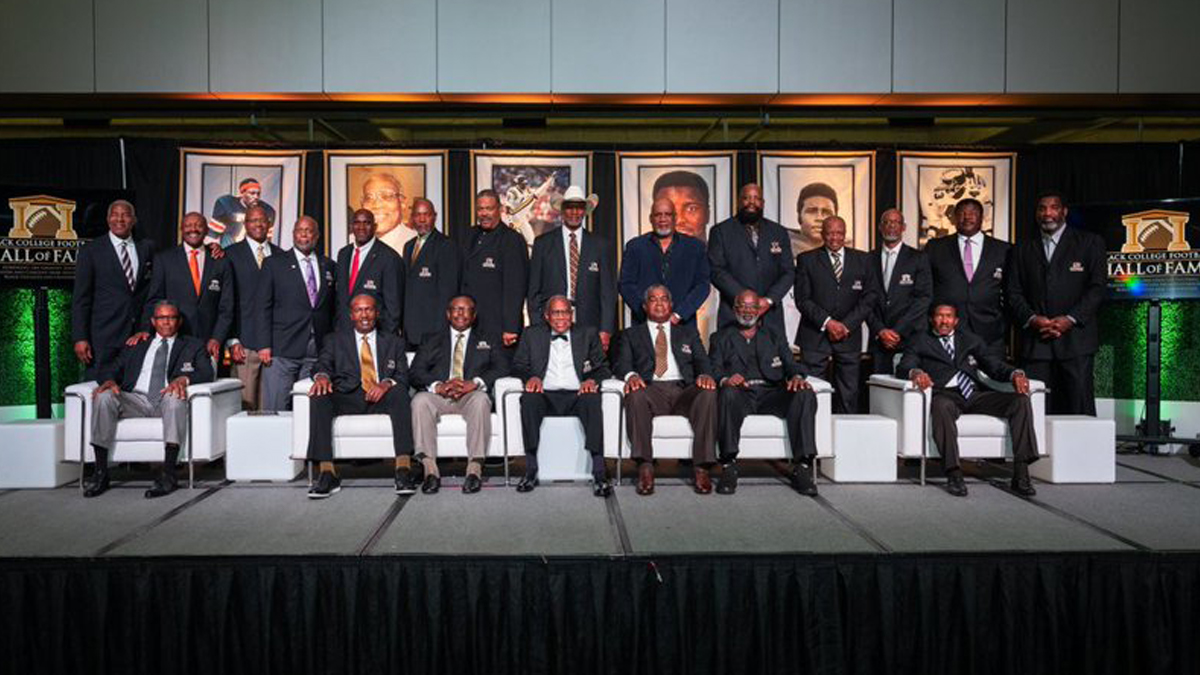 A punter, a coach and a bevy of SWAC greats make it into the hall.

ATLANTA – The Black College Football Hall of Fame added five players and one coach to their roster of 90 legendary players, coaches, and contributors at induction ceremonies here Saturday.

As each of the new 2020 Hall of Famers or their representatives took their places on the dais for sit-down interviews at the College Football Hall of Fame, it was clear that these men were being lauded as much for their efforts off the field as their playing or coaching careers.

Players who made their mark in the NFL after star-studded college careers were enshrined along with Coach Willard Bailey, a CIAA legend for his stints as head coach at Virginia Union and Norfolk State.

The most unique of the group was perhaps Greg Coleman, the Florida A&M product who became the first regular African-American punter in the NFL during a 10-year stint (1978-1987) with the Minnesota Vikings. BCFHOF co-host and Master of Ceremonies Steve Wyche asked Coleman why he become a punter.

“When I was a little shorty, I was watching a game between the Baltimore Colts and somebody else,” said Coleman. “It was rainy, cold, muddy and bloody. But the punter came out with a clean white uniform on. He kicked the ball and went back to the bench. So I said at a very young age that that’s what I want to do and that’s what I want to be.”

Coleman, who also ran track at FAMU, talked about the influence Sadie Gaither, the wife of legendary FAMU head coach Jake Gaither, and the institution had on him. Mrs. Gaither made sure he got his studies and graduated. “FAMU prepared me for life, not only as an athlete but as a citizen,” said Coleman. “I can’t say enough about my experience at FAMU.”

Coleman is working to remove the stigma around black punters. Similarly, Black College Football Hall of Fame founders Doug Williams and Shack Harris did the same for blacks at the quarterback position. One of Coleman’s proteges is Georgia Tech punter Pressley Harvin, a 2021 7th-round pick of the Pittsburgh Steelers.

“I’m going to use this platform to shine the light on the darkness of that position,” said Coleman of punting. “There’s only been a trickle of black punters and kickers throughout the league. If I can encourage another young brother that yes, they can, that’s what I’m going to do.”

The father of Texas Southern product Winston Hill, who passed in April 2016, was a local principal in Gladewater, Texas.  Hill maintained that focus on education both during and after his pro career. His daughters Heather Hill and Hovlyn Hill-May ably represented him at the ceremony. They talked about the Winston Hill Athletic Wellness Endowment that will be up and running at TSU this year.

“TSU was community and family, and for us now, TSU is future and opportunity,” said Heather. “My Dad’s endowment,based on his big saying, ‘Finish like a pro,’” is aimed at juniors and seniors. We can get those scholarships sometimes going in through the doors but how do we finish it up? Dad’s ‘Finish Like A Pro’ scholarship is a way of saying we will continue to pay it forward through the HBCUs and particularly, Texas Southern University.”

The 6’4″ 270-pound Hill was known in the NFL for finishing. He played in 195 consecutive games between 1964 to 1976. As a prototype left tackle, he spent 14 years (1964-1977) protecting the blindside for quarterback Joe Namath and opening holes for New York Jets’ running backs. Hill received All-AFC honors five straight years and was voted to eight Pro Bowls. He was inducted into the Pro Football Hall of Fame in 2020.

Tight end Jimmie Giles was a four-time All-Pro for the Tampa Bay Buccaneers after starring at the same position at Alcorn State from 1973-76. “You go to Alcorn State for two reasons,” Giles said during his interview, “to get an education and find a wife,” while mentioning his wife of 45 years, Vivian.

Grambling State and Alcorn State Universities were the first colleges to play in the Louisiana Superdome, said Giles. “That was the only thing that motivated me to play college football. I had promised my mother and father that I was going to school to get an education and then I was going to go to law school. Of course, they were disappointed when I got drafted in football, but they came around.” He was taken in the third round of the 1977 draft.

New Orleans native and Alcorn State product Roynell Young played defensive back on one of the fiercest defenses in Braves and Black College Football history. He finished his career with a school-record 20 interceptions but more importantly, a direction in life.

“I represent possibility,” said Young during his time on the couch. “I’m an example of ‘it’s not how you start, but how you finish.’ I finished as an academic All-American but started as an out-of-control, directionless kid.” Young singled out previous Black College Football Hall of Fame inductees, the late Marino Casem and MEAC Commissioner Dr. Dennis Thomas, who were his coaches and big influences for him at Alcorn State.

Young said he was thanking Thomas, his defensive coordinator at Alcorn State, for having so much patience with him during his formative years at the school. “Don’t get it wrong,” Thomas joked with Young, “we had patience because you had talent.” Young parlayed that talent into nine years of excellence as a cornerback with the NFL’s Philadelphia Eagles after being taken in the first round of the 1980 NFL Draft.

“All around me I was surrounded with black excellence. I couldn’t help but be inspired,” said Young of his time at Alcorn State. “The work that I do now is informed by who I was as a young man who lost his way. So, I’m in the ‘hope business.’ I’m always looking for another me.”

For the last 31 years, his Pro-Vision Inc. has developed a school in Houston, Texas, a commercial urban farm and is currently in the midst of building a mixed-income housing complex in the middle of the “most despair you could ever imagine,” he said.

Coy Bacon left Jackson State as a sophomore, an unprecedented move in the late 1960s, but eventually worked his way up from the Continental League to the NFL. He became a dominant lineman and feared pass rusher during a 14-year career with the Los Angeles Rams, San Diego Chargers, Cincinnati Bengals, and Washington Redskins, playing into his 40s. Bacon racked up 26 sacks in 1976 before sacks were kept as an official stat. He passed in 2008 at age 66.

“He talked about the camaraderie at Jackson State, his teammates, how they all got along, how it shaped him and prepared him for the next level,” said his son William Anderson. “He loved us., did everything he could for us, loved his grandkids, and loved mentoring kids. He’d pick up band loads of kids and take them to movies, church, or wherever he could. He did everything he could to point them in the right direction, get them to college and whatever sport they wanted to play.”

During his comments at the Black College Football Hall of Fame, Bailey talked about the role late VUU legend Tom “Tricky” Harris played in his development. Harris, citing Bailey’s loyalty to him, made Bailey take the job as head coach at VUU. Harris also introduced him to Grambling legend and BCFHOF inductee Paul “Tank” Younger, who at the time was scouting for the Los Angeles Rams.

“He (Harris) made me sit down with Younger, which was a great thing for my program. After those meetings, we didn’t have a lot of problems in terms of having winning seasons every year. He gave me some challenges that I had to adhere to in order to be, as he said, ‘The Eddie Robinson of the East.’“ Bailey accomplished that feat, retiring as the winningest coach in Virginia as well as in CIAA history.