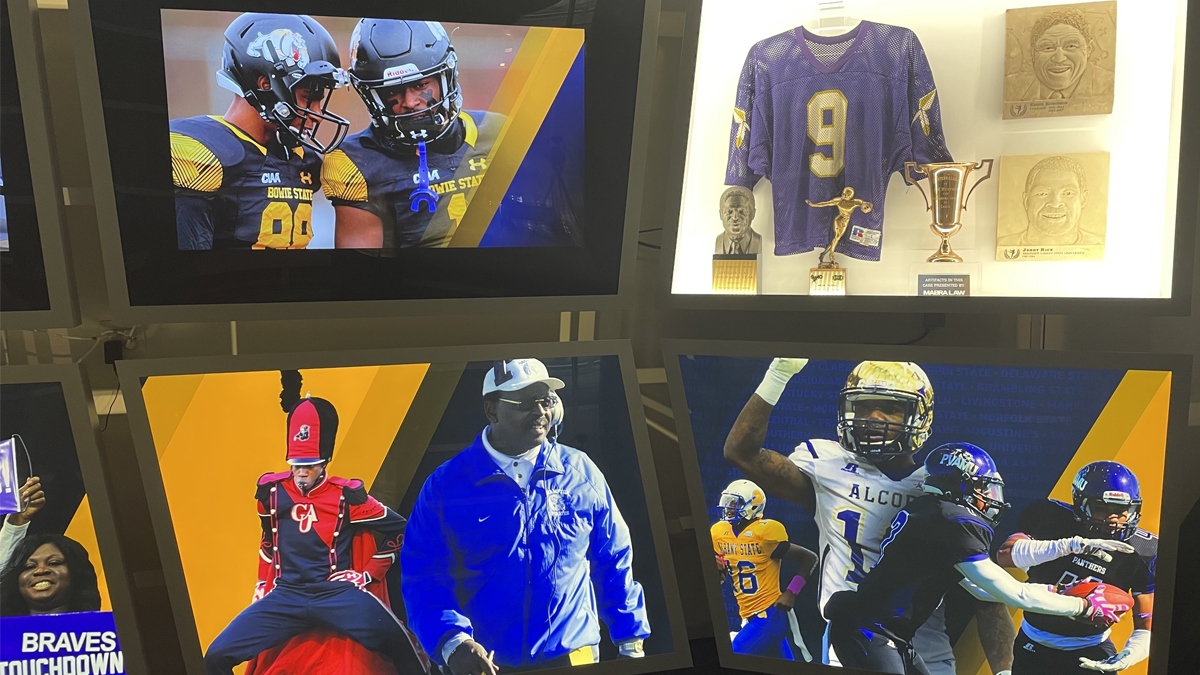 The new exhibit was unveiled on Juneteenth in Atlanta.

“That’s the HBCU Way,” a new permanent exhibit unveiled Saturday at the Chick-fil-A College Football Hall of Fame in downtown Atlanta, makes HBCU football a much more important part of that shrine to the game.

Sponsored by the Southern Company, the exhibit includes interactive videos and kiosks, photos, artifacts, and displays celebrating the many unique aspects of the HBCU football experience. Legendary coaches and players are highlighted along with the role of dynamic and entertaining marching bands, uniforms, classic rivalries. They demonstrate the many sights and sounds that show the integral role HBCUs have played in the history and development of the game.

Genesis of the idea

“What a wonderful opportunity to showcase Historically Black Colleges and Universities here in the College Football Hall of Fame,” said Christopher C. Womack, chairman, and CEO of Georgia Power, a subsidiary of the Southern Company one of the nation’s largest generators of electricity. The idea for the display came to him after a visit to the hall a year ago.

“We all know what football means at HBCUs and I came through here one day and was not real excited about the representation and thought it needed to be enhanced,” said Womack, the first African-American to lead Georgia Power. “And so to see what has come about, what has been put together, I think it is a better reflection of the whole HBCU experience from the football game itself to the entire fan experience of marching bands and tailgating – and the whole experience that happens on HBCU campuses around football. I think it’s so important and so relevant that that be represented and recognized here in the College Football Hall of Fame.”

Held Saturday evening in the midst of a downtown Atlanta celebrations of Juneteenth and unveiled just before the Black College Football Hall of Fame induction ceremony at the Hall Saturday night, the exhibit focuses on the themes of “Community, Leadership and Opportunity.”

“I am thrilled by the work the Hall has done,” said Womack, “and we look forward to seeing visitors come through and tour it and get a better understanding of what happens at HBCUs. It’s not just about the sport but about the leadership, the development, the family, and the culture that kind of makes HBCUs in terms of what they are and what they have been.”

Those feelings were echoed by Mid Eastern Athletic Conference Commissioner Dr. Dennis Thomas and Cricket Celebration Bowl Executive Director John Grant, who were on hand and made comments before and during the unveiling.

This is what the Hall needs

“First of all, I have to commend the Southern Company for wanting to invest in this kind of display,” said Thomas, who played and coached at Alcorn State University and served as an athletics director at Hampton University prior to becoming MEAC commissioner in 2001. “You have to understand something. It takes courage for corporate America to invest in HBCU institutions and anything that we do. This exhibit is what we need. It’s a shot in the arm so that when visitors come to the College Football Hall of Fame, the HBCUs are well represented.”

Grant expressed his excitement about the exhibit and presented a replica Celebration Bowl trophy to the Hall to be a part of it. While speaking of the impact the exhibit can have, he also urged those in attendance to give generously to support HBCUs.

Recognizing HBCU football was not part of the original focus of the College Football Hall of Fame. The National Football Foundation (NFF) founded the Hall in 1951 to immortalize the players and coaches of college football that were voted first-team All-American by media members. Nearly all of them were white. HBCU players and coaches were not even considered for those honors as they competed in the National Association of Intercollegiate Athletics (NAIA) and were not eligible for first-team All-American recognition. As well, few African-Americans played during that time at Historically White Colleges And Universities (HWCUs) or were voted to All-American teams.

Jim Parker, an All-American offensive guard who played at Ohio State from 1954 to 1956 before going on to a Hall of Fame pro career, was the first African-American player voted to the Hall in 1974.

Eligibility for the Hall of Fame expanded in the early 1970s to include All-American HBCU coaches and players. Florida A&M’s famed head coach Alonzo ‘Jake” Gaither was the first HBCU coach to be inducted in 1975. Since then another 12 coaches have been selected (see list below).

Black college All-American players were not added until much later. Grambling’s Junious “Buck” Buchanan and Florida A&M’s Tyrone McGriff were the first HBCU All-Americans inducted in 1996. Nineteen (19) other HBCU players have been voted in since then.

In August 2014, the Chick-fil-A College Football Hall of Fame opened in downtown Atlanta, adjacent to the Georgia World Congress Center and Centennial Olympic Park. In the Hall’s lobby, HBCU helmets are included in a wall display of helmets from every American college that plays football. The new HBCU exhibit is on the second floor of the Hall surrounded by others that focus on key moments in college football history. The names of Hall of Famers and the date of their inductions are in a special room the third floor.

At the ribbon-cutting ceremony to open the exhibit, Womack said he wants to see more.

“It’s actually pretty cool and in vogue now to talk about HBCUs and you see a lot of people giving money to HBCUs today, and it’s very exciting,” he said. “For me, it’s about remembering the history but also recommitting ourselves to the purpose and future of what they’re here to do.

“I want to see more dynamic engagement, not just the static boards, but things that really get us all excited, to do some of the things John (Grant) talked about in terms of reaching through these boards and putting hands in pockets – virtually and literally – challenging you to give, challenging you to invest, challenging you to commit yourselves to HBCUs.”

HBCU Players in the College Football Hall of Fame (21)

HBCU Coaches in the College Football Hall of Fame (13)