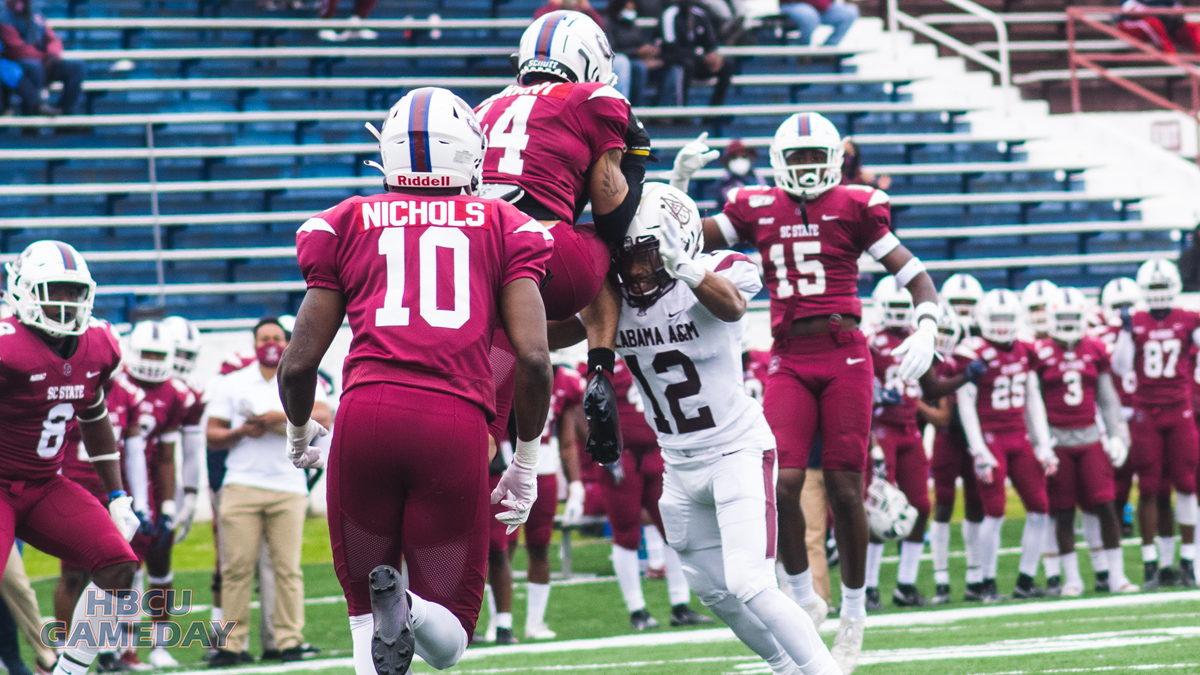 South Carolina State is the lone powerhouse left in the MEAC after the departure of NC A&T, Bethune-Cookman and Florida A&M.

With two-time defending champion North Carolina A&T, Bethune-Cookman and Florida A&M leaving the conference after the spring season, Pough’s team is picked by head coaches and SIDs to win the league title.

All alone at the top

“Any of those guys who left could have been picked ahead of us,” said Pough of the departed teams. “At the same time, you know, we’ve been kind of hanging in there with them around the top.”

“Yeah, I’m kinda glad to see them gone, that might make it better for us,” Pough said. “We’ll see.”

While those other teams sat out the spring 2021 season, Pough’s club posted a 3-1 record. The only loss was 31-7 in the season-opener at home to eventual SWAC champion Alabama A&M.

SC State will have to earn the title

The road to the title is going to be tough.

SC State with open the fall 2021 season (Sept. 4) with the same Alabama A&M squad, on the road this time in Huntsville, Alabama. That will be followed by tough FBS road dates at in-state powerhouse Clemson and out west at New Mexico State. The Bulldogs then have non-conference matchups with former MEAC rivals Bethune-Cookman at home and Florida A&M on the road.

The conference schedule has the Bulldogs playing the teams picked behind them – second choice Norfolk State (11/20), third pick North Carolina Central (10/30) and fourth pick Delaware State (10/23) – all on the road. They face the teams picked at the lower end of the conference – Morgan State (10/16) and Howard (11/6) – at home.

They also play at North Carolina A&T on Nov. 13.

“So yeah, we’re predicted to be first but this schedule is sure making sure that we earn and deserve it,” said Pough.

Pough’s team will be vaccinated

South Carolina is one of the states that has fought any kind of vaccination mandate. Like other leagues, the MEAC will not be re-scheduling games canceled because of positive COVID-19 tests or contact tracing. Those games will be forfeited.

“Our governmental agencies in South Carolina are fighting us from making it a mandate that all players and coaches be vaccinated,” said Pough.

“My football team, Buddy Pough’s team, if you play this year right here (at SCSU), you’re going to have a vaccination. Bottom line, is the guys who ain’t vaccinated, ain’t here.”

The Bulldogs will begin the season with an experienced quarterback in sophomore Corey Fields, who started in the 2019 season (1,652 passing yards, 15 TDs, 5 ints.) and is a second team preseason all-MEAC pick. He missed some time in the spring fighing the virus. Big, talented wide receiver Shaquan Davis (6-5, 180) and two offensive linemen, center Jalen Page and tackle Tison Gray, got first-team honors. Running back Kendrall Flowers and offensive lineman Chris Simon join Fields as second teamers.

“Fields, he’s our guy,” said Pough. “Flowers and (grad) Alex James are neck and neck at running back. I like Jaheim Covington (5-11, 190). He makes me excited when I see him with the ball in his hands.”

The defense is led by senior defensive back Decobie Durant, the preseason player of the year who had three picks of SWAC player of the year Aqeel Glass in the Alabama A&M game last season. Pough says his secondary, led by Durant, is the strength of his team.

Also on the first team with Durant is linebacker Chad Gilchrist. Redshirt sophomore linebacker B. J. Davis (6-2, 190), who some say with his speed and quickness resembles former Bulldog and NFL all-Pro linebacker Darius Leonard, is on the second team.

The biggest losses on the defensive side are on the line where three stout run-stoppers finished their eligibility. Pough will count on a group of youngsters who got in some meaningful reps in the spring to fill the gaps.