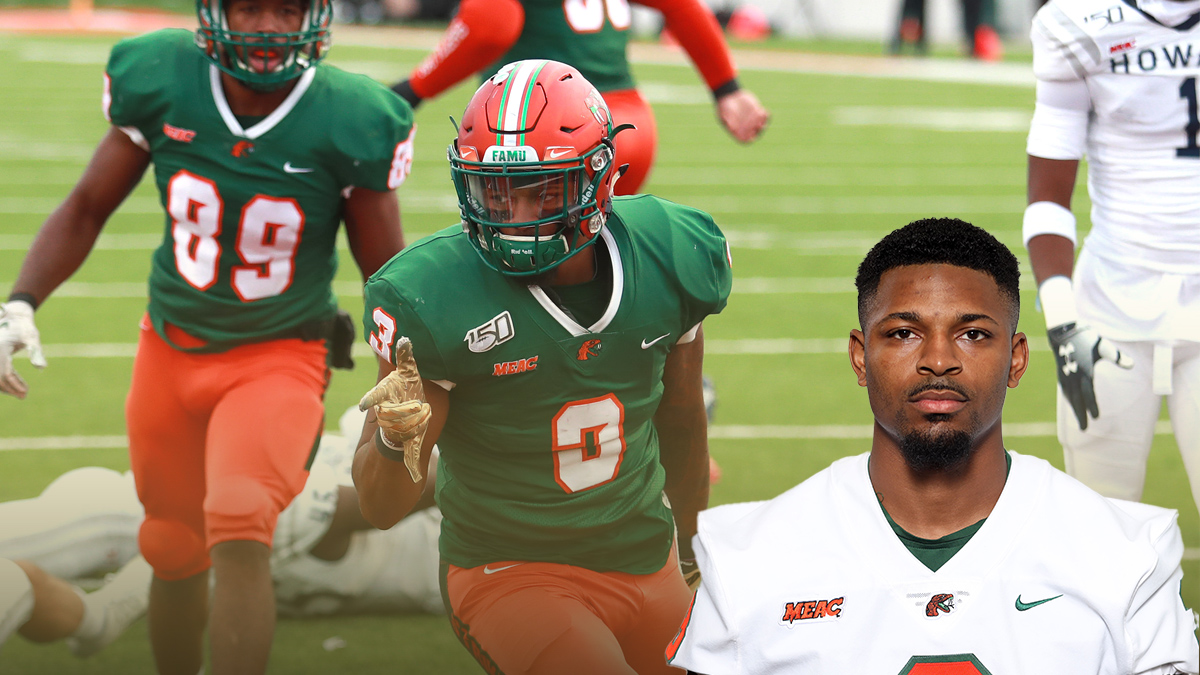 Florida A&M wide receiver Azende Rey is taking his talents to the ACC. He’s the latest HBCU grad transfer to do so.

Florida A&M’s Azende Rey is the latest in a recent trend of HBCU grad transfers to move on to a Power Five program.

Rey is headed to Georgia Tech in the ACC after three solid years on the field for FAMU. He will be on the same team as his brother, GT safety Juanyeh Thomas.

“God led me in this direction,” Rey told the Tallahassee Democrat. “My brother and I prayed about it. Usually, people would hesitate with a decision. God gave me a clear path and I’m taking it. I’m confident in my decision with no regrets. My brother and I are back to our old days in high school of competing against each other.”

Rey graduated with his degree in criminal justice last December. He started his career at FAMU as a running back before switching to wide receiver when Willie Simmons arrived as head coach in 2018.

The position change was a productive one as Rey caught 61 passes for 560 yards and six touchdowns. He also threw for two touchdowns as a Wildcat formation quarterback.

Rey is the latest player to head to the FBS after attaining his degree while honing his skills at HBCU football.

Marcus Cushnie turned into a dominant pass rusher in the SWAC at Alabama A&M, helping it win the conference title this spring. Following that win, he hit the transfer portal and ended up at Florida State.

Arkansas Pine-Bluff’s Harry Ballard spent a couple of seasons toasting defensive backs in the SWAC before leaving via the transfer portal as well. He has taken his talents to Nevada.

Former Alcorn State defensive back Qwynterrio Cole has hopped over to the ACC and will be playing for Louisville this fall.

Jackson State’s Daylen Baldwin had a breakout spring season under Deion Sanders. He hit the transfer portal this fall and will play in the Big Ten at Michigan.

The darkside of the transfer portal for HBCUs

To be sure, players and coaches at HBCUs have taken note of the trend of big schools grabbing HBCU grad transfers.

“It’s kind of amazing to me,” Alabama State running back Ezra Gray told HBCU Gameday at SWAC Media Day. “You have some people who look at HBCU football and they kind of look down on it. But then you look up in the transfer portal, it’s these Power Five schools that are jumping on guys out the gate, like right off the rip. That’s kind of crazy to see.”

Mississippi Valley State head coach Vincent Dancy agreed. He said that the SWAC’s participation in football during the spring definitely let the cat out of the bag in terms of the level of talent that played in that conference.

“It opened up a lot of eyes, brought a lot of attention to our conference, exposed a lot of our young men that we do have some great, fantastic young men in this conference that can play some big-time football  — which we all knew. Nobody knew because we all played at the same time. And when we were able to separate it and play in the spring, a lot of people chimed in and all eyes was on us. So it exposed a lot of our kids.”

One long-time assistant coach took it a step further, stating that FBS programs were preying on smaller schools.

“I think it is just going to make the rich get richer,” said the coach, who asked to remain anonymous. “I’m not opposed to it because it gives the student-athlete more freedom to make decisions regarding their career.  I am all about the student-athlete being able to profit from their athletic ability just like the University does.  I do however think that the Power 5 schools are going to look at the FCS and “mid majors” as a farm system.”

The coach claimed that one of his star players was “unofficially/officially” approached by an ACC school. He knows that HBCU grad transfers and others will be presented with other opportunities, but also how vital it is for HBCUs to bring in talent.

“I hope the portal can continue to be used a vessel to come home to our HBCUs,” he said. “I said all that to say that I like it because it benefits the student-athletes, but like just about everything else it has its flaws.”