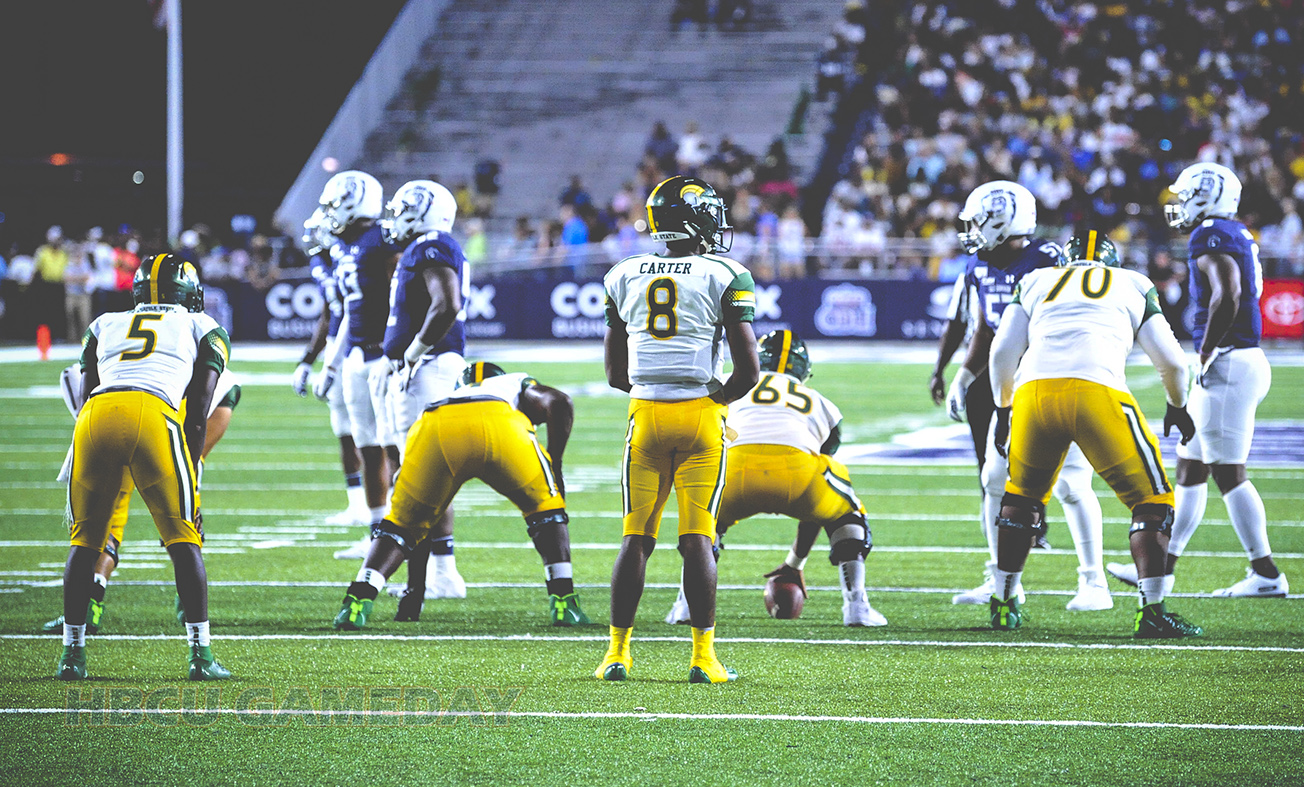 Norfolk State has arguably more talent than anyone in the MEAC. But will that result in a title in 2021?

It has been a decade since Norfolk State won a conference championship. Three-and-a-half since it won one that still counts. But the 2021 NSU squad has a chance to end those streaks.

NSU was picked to finish second in the MEAC, despite losing its head coach less than six months before the start of its first season since 2019.

The departure of Latrell Scott this spring left the door open and in walked long-time Southern University head coach Dawson Odums. The former North Carolina Central star is back on the East Coast and starting his tenure with a team that is a legit threat to win the MEAC title. It’s a veteran-heavy team that he’s had to win over quickly after a long hiatus following a late cancelation of the spring season.

“I think they’re buying in,” Odums said at MEAC Media Day, just a few miles from his new home campus. “They’re eager, they’re hungry, and they want to win.”

And they have the talent too.

Pootie and the Gang

It all starts with quarterback Juwan “Pootie” Carter. The senior from up I-64 in Richmond has been at the helm of the program since his freshman season back in 2017. In the past week he was named MEAC Preseason Offensive Player of The Year and put on the Walter Payton Award Watch list.

“He has special talent,” Odums said of his lead signal-caller. “And I think that talent is what leads him and drives him. He’s very detailed in his approach. He’s a champion and he wants to bring a championship to Norfolk State. I think when you have that desire and determination at the quarterback position, it’s only a matter of time before that success finds you.”

Also returning for NSU is nearly 1,000 yards rushing in the form of sophomore duo Kevin Johnson and Rayquan Smith. Both backs averaged better than five yards per carry in 2019, with Johnson running for eight scores and catching three touchdowns to boot.

Carter also has a several solid receivers to get the ball to. Da’Kendall James is a preseason first-team All-MEAC selection, as is tight end Shawn McFarland. Justin Smith led NSU in receiving in 2019, catching 36 passes while averaging impressive 17-plus yards per catch to go along with six scores. He’s made a quick impression on his new head coach as well.

“Justin does a great job in his preparation. Continuing to get better. Learning the game to try to achieve greatness. I think that’s one of his greatest characteristics is his unbelievable work ethic,” Odums said.

“He’s going to have an opportunity at the next level. I think he needs to put up some good numbers this year to get his name out there. But great young man, I’m happy to be his coach.”

NSU also has two first-team All-MEAC offensive linemen upfront to protect Carter and open up holes for the backs.

Norfolk State D-Line will be big

The strongest position for the Spartans appears to be along the defensive line. Three of the first-team All-MEAC selections wear the green and gold. Redshirt senior Chris Meyers racked up nine sacks in 2019 and will be counted on to apply pressure in 2021. De’Shaan Dixon is the team’s leading returning tackler with 61 total stops in 2019, including 7.5 behind the line.

Cornerback Devin Coles returns after picking off five passes in 2019, tying for the MEAC lead that season. He’ll have Brandon Savage back with him as well.

NSU even has both the top placekicker and punter returning in the MEAC as well.

NSU will be battle-tested early with back-to-back FBS games against Toledo and Wake Forest, before meeting up with old CIAA rival Elizabeth City State. This season also marks the return of the Battle of The Bay, a rivalry game against Hampton that hasn’t been played since 2017.

“We really don’t like the guys across the water,” Smith said. “They got us the last time we played, but I definitely cannot wait for that game.”

But winning the MEAC and getting to the Celebration Bowl is the ultimate goal. Every game will be an elimination game of sorts in the conference. And if things go as planned, the season finale against SC State could determine who is the first to stake claim to the new-look MEAC crown and take a trip to Atlanta.

For sure, there is talent in Norfolk to get it done. That has been the case before, but perhaps this is the year the tidewater will turn in NSU’s favor.