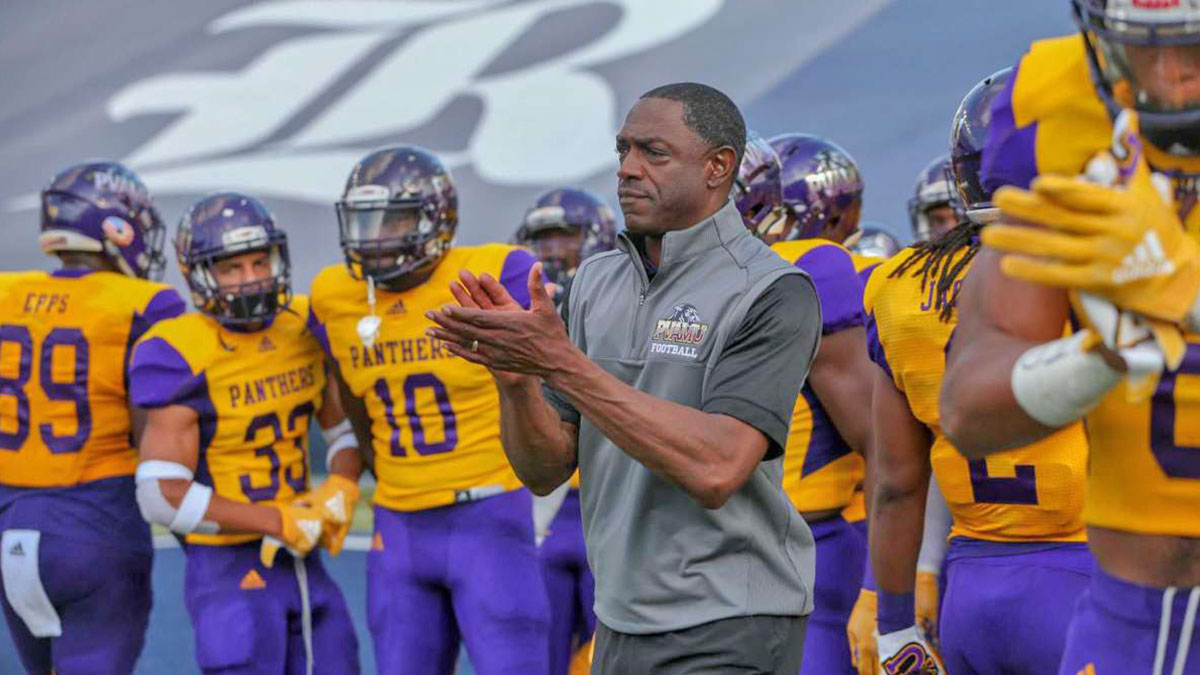 Prairie View A&M in line to finish this season

“We’re going to put our pants on just like everybody else – one leg at a time. And if they decide to sit back and put both legs in, we can do the same thing as well,” says Eric Dooley.

Prairie View A&M head coach Eric Dooley says the theme for this year’s team is “finish.” It’s something the Panthers did not get to do a lot of in the spring.

They posted a 2-1 record with the only blemish a 36-31 close loss to eventual West Division champion Arkansas-Pine Bluff in mid-April. The UAPB game was played five weeks after the Panthers won their first two games the first Saturdays of March – 20-19 over Texas Southern, and 17-10 over Grambling State. COVID-19 protocols related to contact tracing shut them down after that. After the UAPB game, their final game (vs. Jackson State) was also cancelled.

It was the first loss to UAPB since 2012 and the third consecutive win over Grambling. The Panthers could not have won the West Division title or played in the league title game however because of its low Academic Progress Rate (APR). The Panthers are off those restrictions and will have a chance to get to the finish line this fall.

Making a positive out of negative

“Going five weeks with no game required a lot of discipline,” said defensive end Jason Dumas, a preseason second team all-SWAC selection who accompanied Dooley to last Tuesday’s SWAC Media Day. At only 5-10 230 pounds, Dumas used his quickness in the spring to post 3.5 sacks and 7.5 tackles for loss, both third best in the SWAC.

“Being tested three times a week, Zoom meetings, separate workouts, we were off and on a lot,” said Dumas. “Had we been practicing each week as normal, I believe the outcome against Pine Bluff would have been different.”

Dooley looks at the experience positively but is looking forward to playing the full 11-game schedule this season. He expects the Panthers, picked to finish fourth in the West Division, to be in the mix again.

“It was a positive that we played three games,” Dooley said. “It allowed is to grow as a team. Yes, the spring was incomplete because we didn’t play a full schedule. The Bible says we shouldn’t be anxious for nothing, but we’re anxious for the season to start.”

Under Dooley for the past four years, Prairie View A&M has been known for putting up big offensive numbers. This year, he returns sophomore quarterback Trazon Connley, who split time with T. J. Starks as the offense struggled to score in the first two games. Connley took over against UAPB and passed for 341 yards and three touchdowns, but also threw three picks. Dooley says the quarterback position is unsettled.

Lyndemian Brooks, the leading rusher in the spring for West Division rival Grambling State, has transferred to Prairie View and should help boost a running attack that was dead last in the SWAC a year ago averaging just over 100 yards per game.

Troy Mullins and Chris Johnson return as the top receivers. Khris Simmons and Colbey Washington are young receivers expected to get more opportunities.

Dooley’s defensive unit was again among the best in the league, giving up 327.0 yards per game (2nd in SWAC). The Panthers lost prolific linebacker Storey Jackson (transferred to Liberty) who led the FCS averaging nearly 17 tackles per game and Jaylen Harris who opted to play in The Spring League. Their absence opens up things for Tre’Shaud Smith and Jessie Evans and a host of others in the linebacking corps.

Dumas is joined up front by junior transfers Troy James and Shelvin Hudson. Rover Drake Cheatum and cornerback Darius Campbell are key returnees in the backfield. Campbell led the SWAC in pass break-ups.

How you wanna put your pants on?

With the addition of Bethune-Cookman and Florida A&M to the SWAC, and Alcorn State sliding over to the West Division this season, Dooley likes the direction the conference is headed. He even welcomes the big shadow cast by Jackson State coach Deion “Coach Prime” Sanders.

“I like the competition throughout the conference,” Dooley said. “I’ve been saying for years and years that the SWAC is a competitive conference. You want to compete at a high level so it just brings more fuel to the fire.

“We’re going to put our pants on just like everybody else – one leg at a time. And if they decide to sit back and put both legs in, we can do the same thing as well. But we’re going to be prepared.

Prairie View A&M in line to finish this season