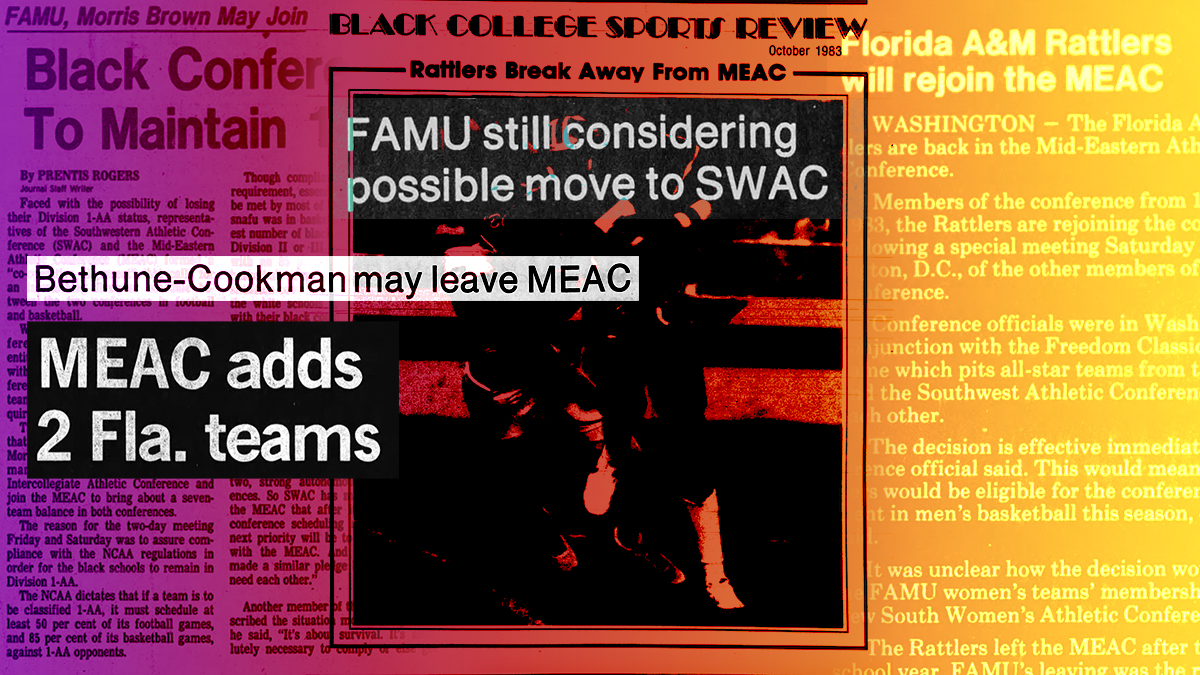 The 40-year marriage between FAMU, Bethune-Cookman and the MEAC is now over. The initial honeymoon didn’t last long.

Florida A&M and Bethune-Cookman officially switched from the MEAC to the SWAC on July 1, 2021. The Florida duo’s move to the SWAC has been a long-time coming if you examine their 40-year-plus relationship with the conference.

By the late 1970s, Florida A&M had long been established as one of the major powers in not only black college, but small college football. It had done so by dominating the Southern Intercollegiate Athletic Conference (SIAC) for the better part of the previous 30 years. That dominance started under Bill Bell and Jake Gaither, and continued under Rudy Hubbard.

During that time, FAMU was a member of the SIAC, but often played just as many games against the likes of Tennessee State, SWAC, CIAA and — eventually — MEAC opponents. By 1978, FAMU was fighting for Division I-AA status, and being in the SIAC wasn’t helping. So it started looking at its options — namely, the MEAC and SWAC.

The SWAC was a powerhouse football league by 1979, with Grambling State, Jackson State and Alcorn all consistently ranked at or near the top of black college football. And all of whom FAMU had routinely battled for years. FAMU actually had to get past Jackson State in order to win the first-ever Division I-AA Championship Game.

The MEAC was an upstart with big potential and big problems. Founded in 1970 primarily by the bigger schools of the CIAA, the conference had its eyes on Division I status from its inception. But by the time the opportunity arrived late in the decade, not everyone was on board with it.

Maryland-Eastern Shore left the conference, while Morgan State and North Carolina Central were on their way out. Tennessee State hadn’t expressed any interest in joining the conference, which needed another football program to get an auto-bid to the NCAA playoffs.

The two conferences actually met up during the summer of 1979 to discuss a possible merger. Invitations were also given to FAMU, Morris Brown and FAMU’s rival — Bethune-Cookman College.

BCC didn’t have the gridiron history of FAMU, but by the 1970s it had become a power in its own right. And it was keeping a close eye on its Tallahassee neighbor as it prepared to bolt the SIAC.

The proposed super-conference never took off. Instead, FAMU chose to join the MEAC. The addition was a godsend to the MEAC.

“There’s no doubt that this is quite a lift for the conference and gets us back up to six schools,” MEAC commissioner Ken Free said at the time. “Now we can reach our objective of an automatic berth in Division I playoffs and it can help us attract even more schools.”

Free was right. And it didn’t take long. A few weeks later, BCC decided to move to I-AA and join the MEAC as well.

A little more than two years into the league, the first crisis involving the Florida schools emerged. The Florida Classic had been started between the two SIAC refugees back in 1978, and by 1982 the Tampa-based Bowl game was drawing 40k plus fans. The two sides met in spring of 1983 to negotiate the future of the game — but FAMU had a problem.

Long before there was a MEAC, the Orange Blossom Classic was a signature event for FAMU football. It started back in the 1930s, but really got going in the late 1940s when it moved to Miami. The FAMU home game had many times decided who would claim the black college football national title.

But things were changing around the country during the Ronald Reagan era, and Miami was experiencing adverse effects. The city had earned a reputation as a dangerous, less-than-family friendly space. So FAMU decided it was time to bring its signature event to Tampa.

“We decided to move the Orange Blossom Classic game back to Tampa because the climate in Miami had changed,” then AD Roosevelt Wilson said. “With the constant threat of violence in the city, people didn’t want to come out at night and attendance dropped. Even the bands were reluctant to take part in the parade because of harassment. Basically, the situation in Miami was not compatible with the high standards of the Orange Blossom Classic, which is synonymous with FAMU football.”

The move would have given FAMU games in Tampa for back-to-back weeks, which it did not want. Eventually, MEAC commissioner Ken Free decided that BCC would be the home team and control the gate. BCC decided it would keep the game in Tampa.

And all hell broke loose.

The MEAC Council of Presidents decided to intervene, but it was no use. Neither side wanted to give up. Both presidents got involved. By the time July rolled around, FAMU had started looking for replacements. It found one in Eastern Kentucky. Wilson told the media he tried to contact commissioner Free to let him know, but Free said he never got the message.

But he sent one to FAMU, handing down a penalty for violating a rule that stated that each MEAC member had to play other MEAC members. The punishment disqualified FAMU from all championships, didn’t allow it to share in television revenue and was required to schedule a game against BCC on Nov. 17, 1984.

FAMU decided to pull out of the MEAC.

“We can’t operate based on what will happen to the MEAC,” Wilson said. “Rather than stay in the conference and fight, we choose not to be affiliated with the MEAC. We can’t compromise FAMU to look out for the MEAC.”

Reaction to the move was swift.

“It didn’t take them (FAMU) long to decide to leave the league,” Delaware State AD Nelson Townsend said. “Personally, I think their decision was based on goals they had prior to the vote to penalize them.”

“It’s kind of like a divorce, but the people still love each other,” Wilson would tell the Tallahassee Democrat.

The loss was devastating for the MEAC. Having fallen below the required number of conference participants, the MEAC’s playoff auto-bid was stripped. Instead of getting an automatic bid to the playoffs, SC State had to look for an auto bid after winning the 1983 title. It never came.

“We can’t afford to lose $85,000 and a world of exposure we would receive by playing on TV (in the playoffs),” Free said at the time.

And so FAMU left the MEAC for the first time, playing as Division I-AA independent for the 1984,’85 and ’86 campagins.

FAMU returns to the fold

Three years after leaving kicking and screaming, FAMU was back in the MEAC. The school was welcomed back into the conference in December 1986, along with the autobid.

There was new leadership at the helm in Tallahassee. Nelson Townsend was now the AD at Florida A&M, and along with the blessing of new president Dr. Fredrick Humphries, he began mending fences to open up the door for the school’s return.

The two Florida schools would go on to win their first-ever MEAC titles in 1988, finishing in a three-way tie with Delaware State. FAMU would win one more title under legend Ken Riley before handing the reigns over to Billy Joe. Joe would win five MEAC titles in seven years in the 90s and early 2000s.

That success, along with multiple leadership changes, would sow the seeds for FAMU’s second disjointing from the MEAC.

Be on the look out for Part II on the history between the Florida schools and the MEAC.