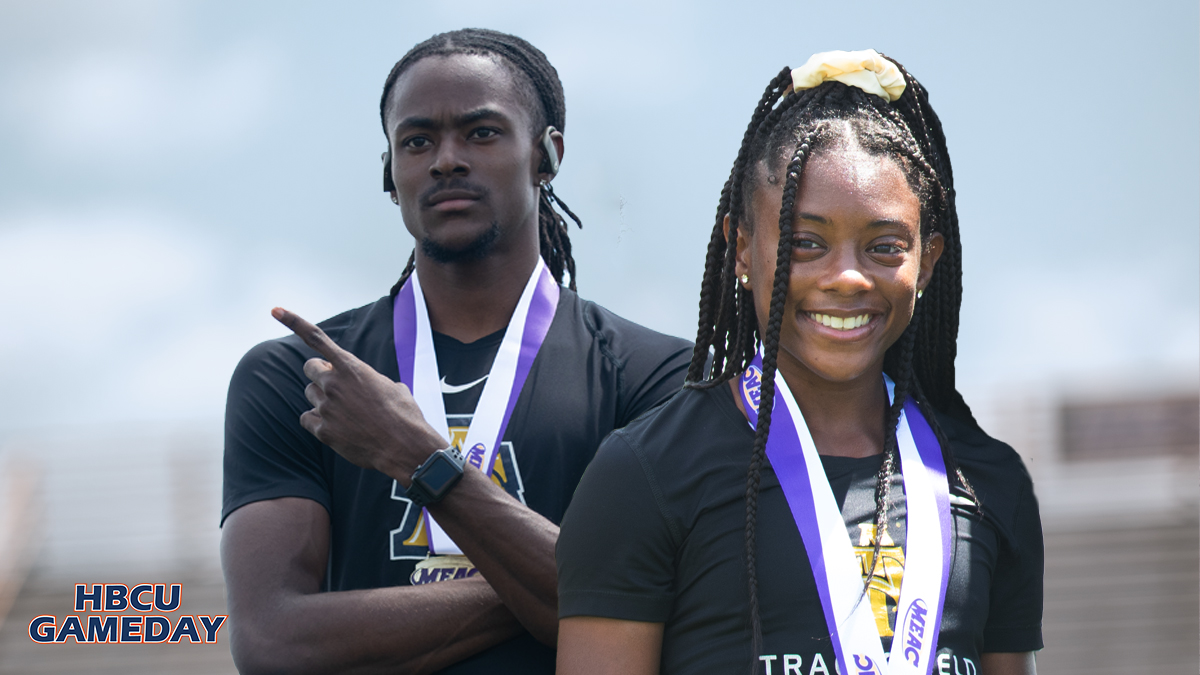 Olympic Trials next up for N.C. A&T track stars

In impressive fashions, Sturgis, a sophomore, won both the women’s 100 and 200 meter races at the NCAA Outdoor Track Championships last week. Equally impressive, Ross Jr., also a sophomore, won the men’s 400 meters and ran a leg on the Aggies championship-winning 4×400 relay team.

Both are now busy getting ready for a chance to make the U. S. Olympic Team as the 2021 USA Track & Field Olympic Trials get under way this Friday, June 18 through Sunday, June 27. The trials are being held at Hayward Field at the University of Oregon, the same venue that hosted last week’s NCAA championships.

Sturgis and Ross Jr. stayed in Eugene to train while other teammates flew home to Greensboro after finishing third (men) and tied for fourth (women) in NCAA team competition. The duo, other teammates and head coach Duane Ross will be there throughout the trials. In fact, Ross’s current and former A&T pupils will be in the trials as well.

The quick turnaround is a departure from in previous years where two or three weeks were between the NCAAs and the Olympic Trials or U. S. National Team trials.

“There’s some good and some bad with it,” said Ross, on a Zoom call with HBCU Gameday Wednesday. “The positive is that these student/athletes, coming off the NCAAs, they’re race-ready, so you know, they’re sharp. What could possibly be a downside is if you don’t manage your recovery well enough to get ready for this championship. So it’s all about preparation, and I think we do a great job with that. So I think our kids are ready to roll.”

The Olympic Trials represent a step up in competition that Ross is quite familiar with. The Clemson product is a former NCAA champion in the 110-meter hurdles who earned a spot on the 2004 Olympic team. He is a four-time member of the U. S. World Championship team where he earned two U. S. titles and two silver medals in the 60 and 110 hurdles.

“Yes, the competition this past weekend was extremely competitive, but hey, the Olympic Trials man, that’s a different beast,” said Ross who was named Monday as the co-national men’s coach of the year by the United States Track and Field and Cross Country Coaches Association (USTFCCCA). “Now you’re running against athletes who do this for a living. They’re doing this to pay their mortgage, to take care of their children.”

“So, there’s no mistakes allowed. You’ve got to be prepared each and every round. There’s no do-overs. So I think the mental aspect is hugely underestimated. I would say, at most, it’s the mental aspect, getting mentally prepared.”

Both Sturgis and Ross are in great position to make the team. The top three finishers in each event make the Olympic Team which will compete at the 2020 Tokyo Olympics in Japan being held from July 23 to August 8.

Sturgis took NCAA titles in the women’s 100 meters (10.74) and the 200 meters in (22.12) in world-class times. Her 100 meters time set a meet and collegiate record and would have put her in second place among Americans behind dynamic former LSU sprinter She’Carri Richardson’s 10.72. The time however was not official because of a 2.2 meter tail wind. Sturgis’s previous best of 10.92 still places her third entering the 100 competition, eighth in the world rankings.

Richardson is in the 100 field as is Southern Cal’s Twanisha Terry, who finished second behind Sturgis in the 100 at the NCAAs. Terry has the second-best American time in 10.89. Alabama’s Tamara Clark, who finished third last week, has the sixth best time at 10.96.

Sturgis’s equally impressive 200 time (22.12) places her just one-hundredth of a second behind Richardson’s national-best 22.11. Sturgis’s time is the fourth best in the world this year behind Shaunie Miller-Uibo of the Bahamas 22.03, Britain’s Dina Asher-Smith’s 22.06 and Richardson.

“The 100 was very shocking because throughout the season I knew I had a couple of things, here and there, that I had to work on,” said Sturgis, who marks the 200 as her favorite race. “Sometimes I’d have a good race., sometimes I’d had a bad race. It surprised me, especially, with me not having them (the competition) beside me and them (the announcers) not announcing me.”

TV announcer Jill Montgomery said before the women’s 100 that the race would be between lanes five and six (USC’s Terry and Oregon’s Kemba Nelson). “So I had to go up there and execute my race,” Sturgis said.

The women’s 100 meters is one of the earliest events in the Trials. The first round of three heats is set for Friday beginning at 6:37 PST. The 100 meter final is set for Saturday night at 7:51 p.m. The top two finishers in each heat and the three other fastest times will make the finals.

“Cambrea and I took a walk last night just to get away, get out the hotel, not talk about competition for a second,” said Ross, of how he was helping Sturgis prepare mentally for the competition.

Ross Jr., the son of the A&T coach, blazed the track in 43.85 in winning the 400 meters, the third fastest time in NCAA history. The time makes him just one of three Americans to run a sub-44 time this season. Only Fred Kerley (43.64) and Michael Norman (43.79) have better times. He also ran a sub-44 second leg of the Aggies 4×400 relay team that took that championship.

Despite his top time in the 400, Kerley, who also has qualifying times in the 100 (9.91) and 200 (20.54) has decided to compete in only those events, and will not run the 400. Norman will. Aggie senior Trevor Stewart, who finished fourth in the 400 at the nationals, ran 44.25 earlier this spring that is the fifth best time entering the trials.

The potential competition is not Ross Jr.’s focus.

“It actually doesn’t affect it (my strategy) at all,” said Ross Jr. “Going in, every person has to run the same exact amount of meters. Everybody’s in their own lane. Having people that went 43 (seconds) in heat can help you push, and the competition can make you run faster. But, I still have to focus on me. If my mind is somewhere else when I get on the line, the race is not going to go well. So as long as I focus on me, run my race, do the same things I’ve been doing the whole year, I’ll be alright.”

The rest of Ross’s troops

Former Aggie standout Christopher Belcher, who now runs for Nike but is trained by Ross, has a 10.01 time in the mens 100 meters field. Rodney Rowe, another former Aggie still coached by Ross, made the 100 field based on his 10.05 time. Rowe is also in the 200 field with a time of 20.12.

A&T freshman Javonte Harding had a qualifying time of 20.21 in the 200 meters but was scratched after pulling up in the NCAA 200 with a hamstring injury.

The other current Aggies competing at the trials are Madeline Akobundu (12.81) and TeJyrica Robinson (12.83). Both came in just under the women’s 100 meters hurdles qualifying time of 12.84 seconds.

“The guys are ready to run. They’ve rested and they’ve recovered,” said Ross. “(Randolph Ross) Junior looked great in practice yesterday. Physically, he’s ready to do exactly what he did this past weekend, or even go faster! But it’s going to be that mental aspect, being able to be in the moment but not get caught up in the moment – the crowd, the fact that it’s the Olympic trials, you know, the step-up in competition. If these guys can stay disciplined, stay focused on their lane and what they’re supposed to do, I think they’re going to come out of this on the (Olympic) team.”

Another HBCU product to keep your eye on at the Trials is former Livingstone sprint star Quanera Hayes. Her time of 49.91 is the fourth fastest in the women’s 400 meters field. Her 22.68 clocking in the 200 meters also has her in that field.

Ross already has athletes on the current Aggies teams that will be in the Olympics. Daniel Stokes, who ran the first leg of the 4×400 relay, will compete for Mexico. Akeem Sirleaf, who ran the third leg of the 4×4, will represent Liberia.

NBC Sports Network and NBC will air live coverage every day of the event. NBC’s television coverage will be streamed on NBCOlympics.com.

Olympic Trials next up for N.C. A&T track stars