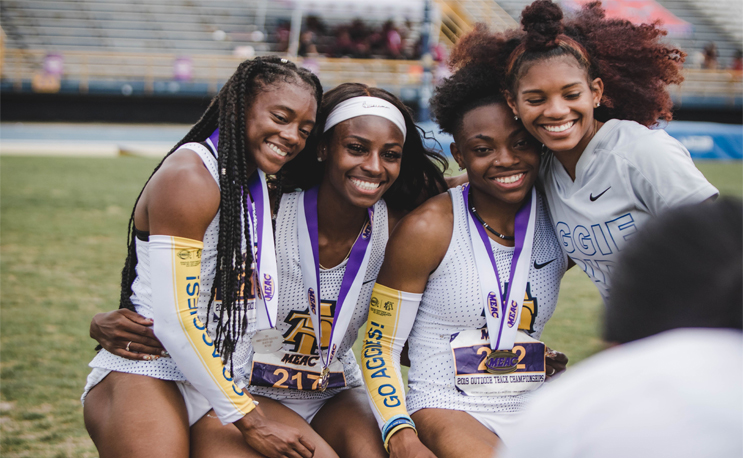 The Aggies won their second outdoor title in three years and their third overall.

Bethune-Cookman was third with 116 points, while Howard (67) and Norfolk State (65) rounded out the top five in the team standings.

Kayla White, the meet’s Outstanding Runner, turned in a pair of performances for the ages, winning gold in both the 100 and 200 meters for the second straight year. She did so in historic fashion; the 10.96 she ran in the 100 was not only a MEAC record and NCAA best this season, but according to the U.S. Track & Field and Cross Country Coaches Association (USTFCCCA), it is the fifth-best collegiate time ever.

She also ran an NCAA-best 22.52 in winning the 200 meters, a race in which the Aggies claimed the top three spots. Cambrea Sturgis came in second with a 22.62, and Kamaya Debose-Epps ran a 23.14 to come in third.

Tori Ray of North Carolina A&T State redeemed herself in the 400 meters, running a 52.73 to take gold.

The Aggies ran 43.45 in the 4×100-meter relay to take the first running event of the day, winning by nearly two seconds over Bethune-Cookman. Madeleine Akobundu then won the 100-meter hurdles in 12.81 as the Aggies swept the podium; TeJyrica Robinson (12.98) was second, and Paula Salmon (13.35) came in third.

Jayne Roberts gave the Aggies the first gold medal of the day, winning the women’s pole vault after clearing the bar at 3.59 meters (11 feet, 9.25 inches).

Norfolk State’s Martha Bissah dominated the women’s 1,500 meters, clocking a 4:28.62 in taking the gold medal by five and a half seconds over Maryland Eastern Shore’s Neus Quinonero. She also won the 800 meters in 2:03.13.

The top three finishers in each event earned All-MEAC honors.