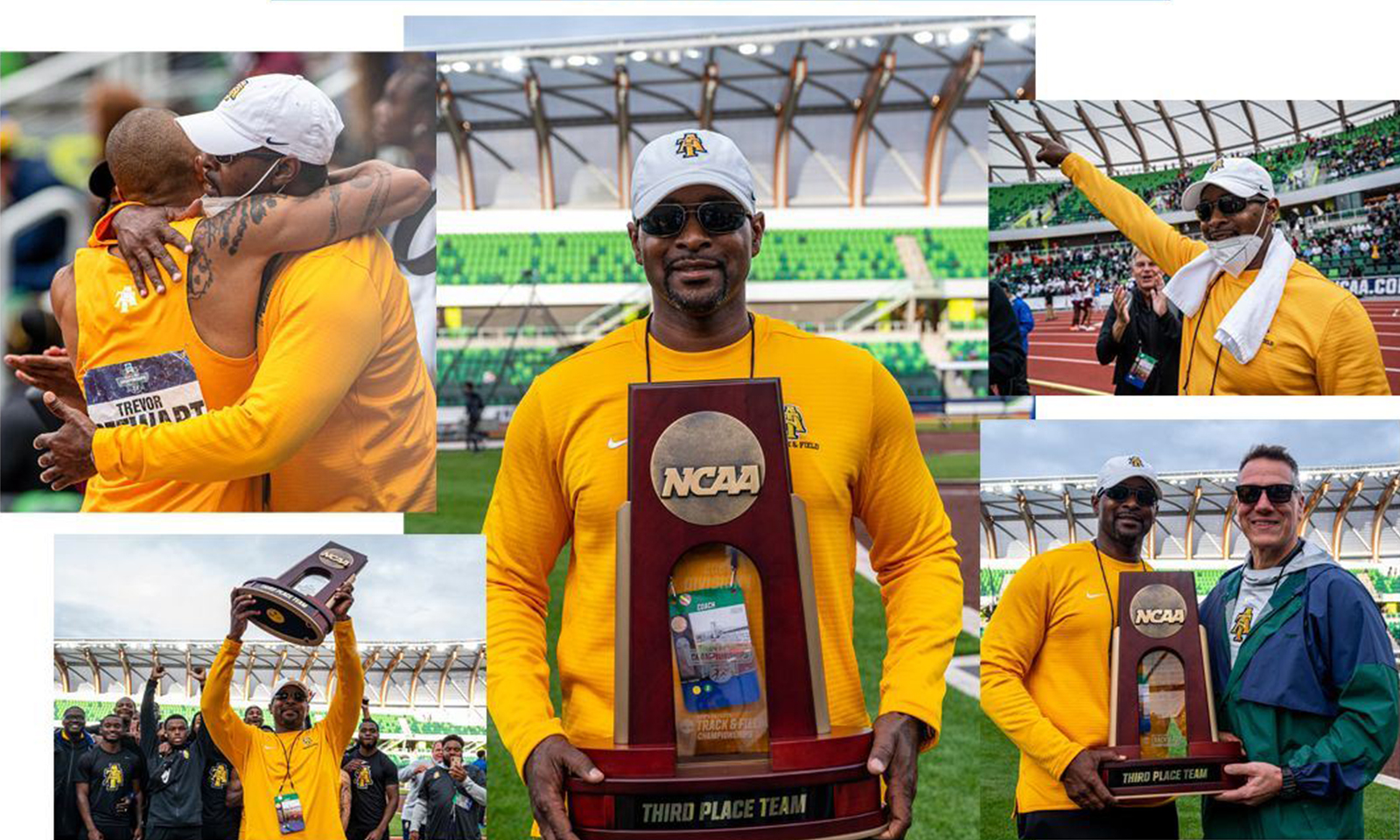 Ross was a professional athlete for Nike. He was a former Olympian. He was a national champion at the University of Clemson.

EAST GREENSBORO – Two things won over North Carolina A&T Director of Athletics Earl M. Hilton III about Duane Ross. “Duane is a straightforward guy, and he had been a champion everywhere,” said Hilton. “That translates, I don’t care what level you’re talking about.”

Ross has certainly been speaking the correct language as North Carolina A&T’s director of track and field programs for the past nine seasons.

This past weekend his championship pedigree grew as the Aggies walked away from the NCAA Division I Track and Field Championships at the University of Oregon’s newly renovated Hayward Field with national championships in the men’s 4×400-meter relay and 400 meters and the women’s 100m and 200m.

Those victories translated into Ross being named co-national men’s coach of the year by the United States Track and Field and Cross Country Coaches Association (USTFCCCA).

“The young people who compete for the North Carolina A&T track and field program are incredible people,” said Ross. “I have the tremendous privilege of helping them fulfill their dreams. My coaching staff is incredible people. They understand the vision, and they execute it every day.

Our leadership at North Carolina A&T has been outstanding as well. From Chancellor (Harold L.) Martin to Earl Hilton, our athletics director, to everyone in between, has been a tremendous help to our program. I appreciate the team effort.”

When Duane Ross walked into Hilton’s office that day, Hilton already knew a Division III track and field coach from Methodist University who had built a championship culture there was coming in to interview. What made the D III success look more appealing is when Hilton’s eyeballs escaped the Methodist portion of the credentials, and he got a look at the rest of the résumé.

Ross was a professional athlete for Nike. He was a former Olympian. He was a national champion at the University of Clemson. It all made sense at that point.

“This man knows how to win,” Hilton recalled thinking to himself.

Duane Ross has not betrayed that thought process. USTFCCCA already named Ross men’s and women’s southeast region of coach of the year earlier this season. On the men’s side, senior 400m runner Trevor Stewart earned USTFCCCA southeast region men’s athlete of the year as well. He guided the Aggies to a podium finish at the 2021 NCAA Division I Outdoor Track & Field Championships, taking third place with 35 points, despite coming into the meet ranked 14th in the National TFRI.

His son, and Aggies 400m runner Randolph Ross Jr., won the 400m with the fastest time in the world this year, a 43.85. He is the third-fastest 400m runner in collegiate history. In addition, Ross Jr. helped Stewart, junior Daniel Stokes and senior Akeem Sirleaf win the 4×400 as Ross Jr.’s 43.8 split helped the Aggies go from sixth place in the NCAA final to first place. Sirleaf and Stewart finished out the race as the Aggies crossed in 3:00.92.

A week earlier at the NCAA East Preliminary Round, the foursome ran a 2:59.21 for the third-fastest 4×400 meter time in collegiate history. Off the track, Ross saw his men’s long jumper, junior Brandon Hicklin, come into the postseason with the 49th best jump in the east. Yet, he finished fourth in the nation with a leap of 25-feet, 11 ½-inches.

Before the NCAA’s, Ross’s men once again dominated the Mid-Eastern Athletic Conference, winning their fourth straight title back in May by winning with a record total of 288 points. The men won every event at MEACs except the 3000m steeplechase.

But then again, what else do you expect from a champion other than championships?