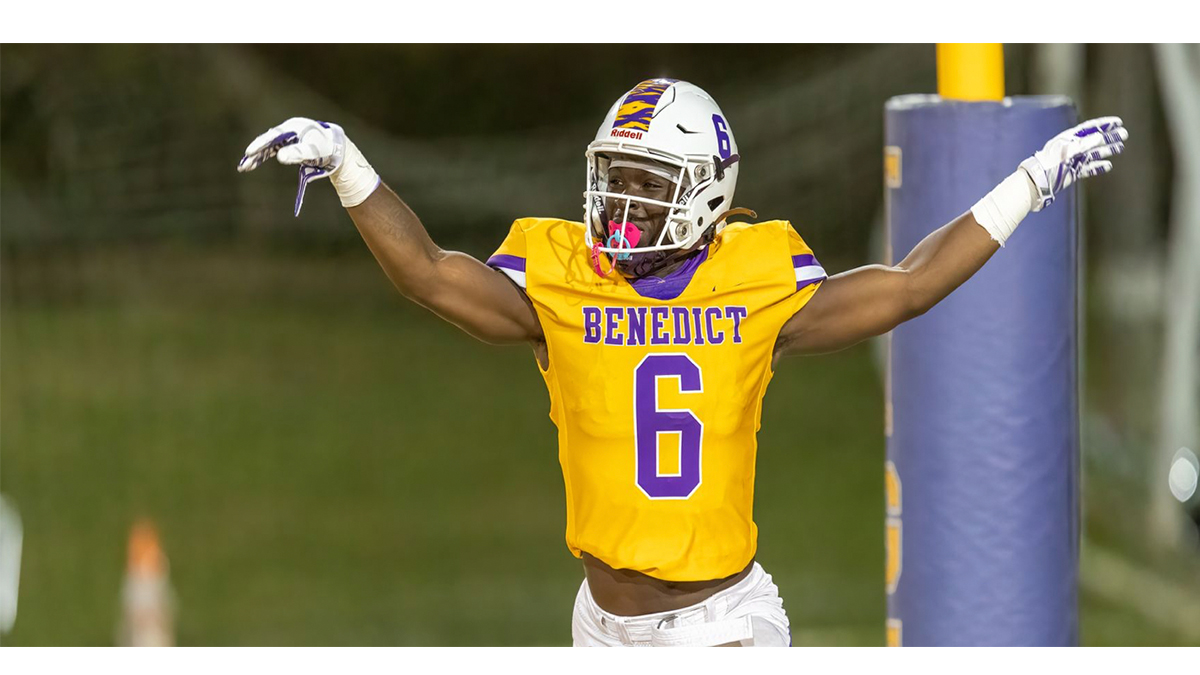 The Benedict Tigers are flying high after a big win over Fort Valley State gets them to 5-0. Running back Zaire Scotland (#6) spreads his wings after scoring one of his four TDs in the win.

Noah Zaire Scotland ran for three TDs of 2, 7 and 1 yards between the second and third quarters. He also scored on a 9-yard TD pass from QB Eric Phoenix in the first quarter. The tallies helped Benedict (5-0, 3-0 SIAC E) jump to a 40-6 lead thru three quarters.

Phoenix ran for 83 yards on 7 carries and completed 14 of 24 passes for 142 yards and two scores. Benedict opened the game on a 7-play, 72-yard drive culminating in Phoenix’s 16-yard scoring pass to Reginald Harden.

The Benedict defense held FVSU (4-1, 1-1 E) to 207 yards of total offense. The Tigers allowed the Wildcats to convert just two of 10 third downs.

The teams entered the extra period tied at 20. TSU scored last in regulation on a 51-yard Kaleb Mosley field goal with just :14 seconds left. Lane led 13-10 at halftime before TSU went up 17-13 early in the third quarter on Jalen Rouse’s 4-yard TD run. Rouse finished with 109 yards on 25 carries.

Brown sent Lane back on top on a 13-yard scoring pass from Tarik McKenzie with 4:44 left in the period. Brown finished with 74 yards receiving and 63 rushing yards with two TDs.

Bhayshul Tuten ran for 114 yards on 27 carries as NC A&T got by Bryant 24-13 in the first Big South meeting between the two schools.

Tuten had two short rushing touchdowns in the first quarter. It was his fourth straight game with over 100 rushing yards.

Bryant pulled to within 14-13 in the third quarter, but the Aggies added a late third quarter 37-yard field goal by Andrew Brown and an acrobatic 25-yard scoring pass from QB Jalen Fowler (11-17-1, 110 yds.)to WR Sterling Berkholter (5 rec., 63 yds.) early in the final quarter to pull away.

Davis passed for 257 yards (16-31-1) and two TDs and had two rushing TDs to have a hand in all four VSU scores. Shaw QB Christian Peters scored on a 27-yard second quarter run and connected with Jonathan Barnes on a 39-yard scoring pass just before halftime to give the Bears (2-3, 2-1 S) a 17-14 lead at the break.

After VSU’s Upton Bailey returned Shaw’s second half kickoff 42 yards to the Bears’ 39, Davis hit Tylique Ray from there to put VSU up 21-14. Peters then drove Shaw 73 yards in nine plays to retake the lead at 24-21 on his 7-yard scoring pass to Elliot Dangerfield Jr.

Head coach Willie Slater at Clark Atlanta and Reginald Ruffin at Tuskegee used to do battle for SIAC West supremacy when Slater was at Tuskegee and Ruffin was at Miles. They battled to a two-overtime decision at their new assignments Saturday.

Ruffin’s Tuskegee squad prevailed 45-43 as his team scored a TD in the second overtime and added a two-point conversion after CAU scored but missed its extra point attempt.

CAU QB Shariif Brown did all he could to keep the Panthers in it as he was 12 of 22 passing for 180 yards and two scores and ran for 70 yards and four TDs.

Tuskegee went into halftime with a 13-9 lead after placekicker Arnes Huskic connected on a 25-yard field goal :25 seconds before the break.

Edward answered and cut the lead to 30-27 on a 6-yard scoring run with 7:39 left. Huskic sent the game into overtime tied at 30 as he connected on a 24-yard field goal with :08 seconds left.

Both teams added a TD and kicked a PAT in the first overtime. TU scored on a 23-yard pass from QB Malik Davis to Jordan Ogletree. CAU answered on an 18-yard scoring run from Brown.

Allen’s TD receptions were for 30 and 43 yards. Harrington also connected on 5- and 72-yard scores.

Golatt, Jr. passed former Bowie State standout Amir Hall who previously held the record for most yards in a game at 433 yards. He connected with four different pass catchers for the scores led by ten receptions for 120 yards and a score from wideout Kwincy Hall.

Southern amassed 550 total yards while holding UAPB to 190 total yards. The Jags picked off four passes and had ten tackles for losses including 2.5 by Jason Dumas that included 1.5 sacks.

The VUU defense had 13.5 tackles for losses including four sacks and also picked off two passes. Redshirt junior defensive end Armoni Burden had two sacks and an interception.

Albany State (4-1, 2-0SIAC) held Miles to a second quarter field goal in coming away with a 20-3 win, The game was a rematch of the 2021 SIAC championship game.

The Golden Rams defense scored first on a 40-yard interception return from Jaree Turner late in the first quarter. They then scored after a 64-yard, 12-play drive on a 2-yard Marcuis Fulks run in the second quarter for a 14-3 halftime lead.

ASU posted four sacks and 11 tackles for loss while limiting Miles to 153 yards of total offense.

QB Dionte Bonneau hit Joe’Vontae Shorter on a 62-yard third-quarter scoring pass to put the final points on the board.

Prairie View A&M defeated Grambling State 34-14 for its fifth straight win over the G-Men. It was the first for new head coach Bubba McDowell.

The Panthers (3-2, 3-0 SWAC W) jumped out to a 27-0 halftime lead before Grambling cut the lead to 27-14 with two late third-quarter TDs. GSU would get no closer as PV added a fourth-quarter fumble recovery by Jaylen Lane for a TD for the final margin.