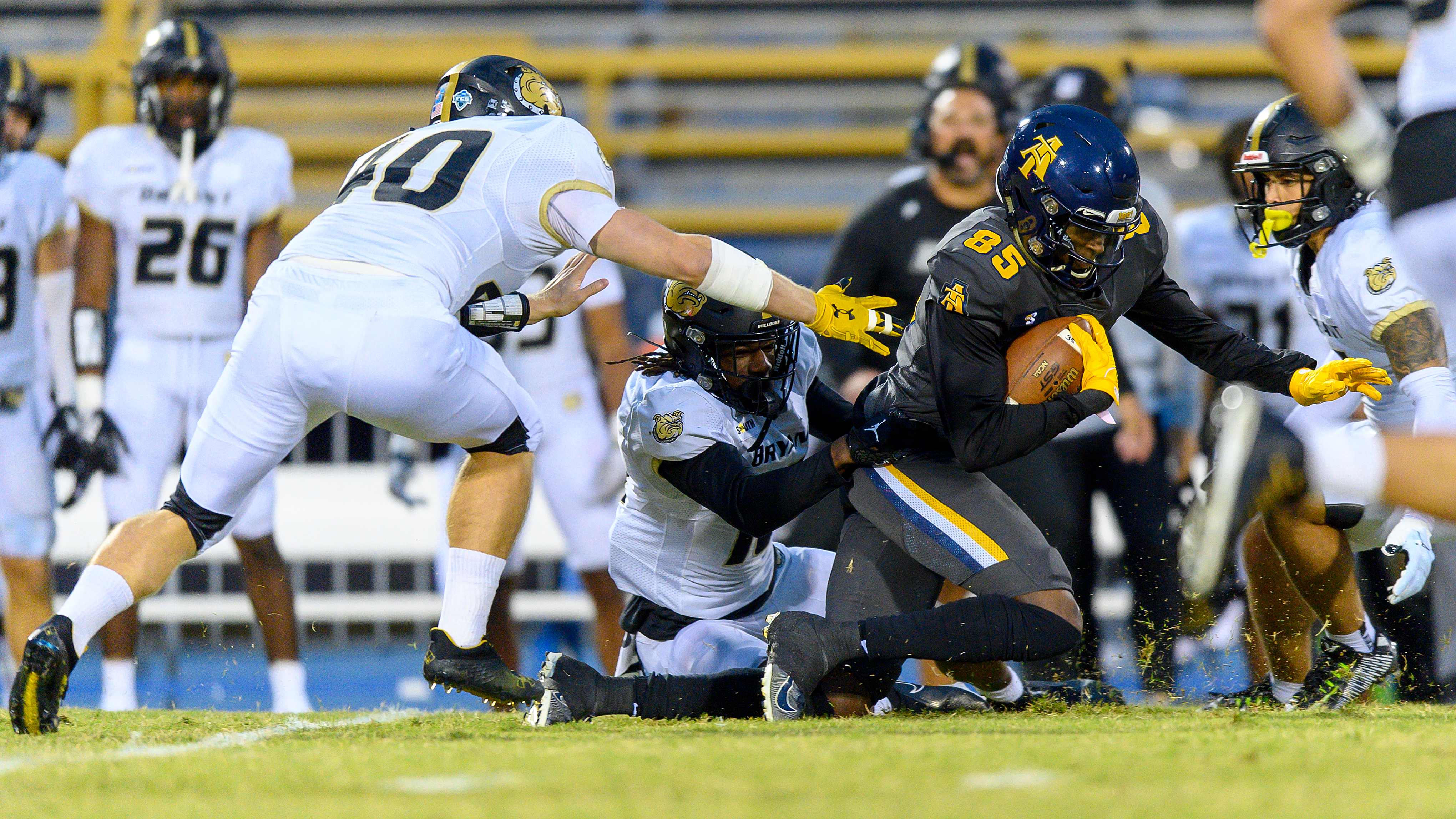 Sam Washington on the victory

“It really was a character win for us,” NC A&T head coach Sam Washington said. “It was one of those see-saws where it could have gone either way. And I thought we hung in there, we fought and we plugged away and we stayed together and unified. We finished a complete ballgame and for that I’m very grateful.”

It was the first Big South Conference game for both schools. The Aggies are now 2-3 overall after their second straight victory, 1-0 in the conference. Bryant is 1-4, 0-1 in the Big South.

Aggies stick to the ground game

NC A&T came into Saturday evening’s game vs. Bryant averaging 184 rushing yards per game, second in the Big South to Campbell’s 188 per game.

The Bulldogs defense however keyed on A&T running back Bhayshul Tuten who came in with three straight games of over 100 yards and was the leading rusher in the Big South at 105 yards per game.

“As the game went on, Bryant did a good job of making adjustments, putting eight in the box at the right time and caused us some difficulties for us to continue to move the football,” Washington said.

Tuten was held in check for most of the game but finished strong with 114 yards on 27 carries (4.2 yards per carry). He came in averaging 7.5 yards per carry. He scored rushing touchdowns of 3 and 5 yards to stake the Aggies to an early 14-0 first-quarter lead.

The Aggies finished near their average with 181 rushing yards on 38 carries.

Sophomore wide receiver Sterling Berkholter came up big for the Aggies finishing with a team-high five receptions for 63 yards.

The 6-4, 185-pound wideout hauled in a 25-yard TD pass from QB Jalen Fowler with 12:17 left in the fourth quarter after Bryant had pulled to within 14-13 on a 20-yard third quarter field goal. Placekicker Andrew Brown connected on a 37-yard field goal with 1:50 left in the third to extend the lead to 17-13. Berkholter’s TD pushed the lead to double-digits at 24-13.

Berkholter’s reception on a fade pattern just inside the left pylon was initially ruled incomplete. The play was declared a touchdown on review.

Berkholter said in the postgame interview that he did not drop the ball.

“I knew I had caught the ball but I thought they probably said it was out of bounds,” Berkholter said. “But after I watched the replay, like the first time, I knew it was a touchdown.”

“This young man came and made a play for us when we needed it most,” Washington said.

All-Big South defensive end Jermaine McDaniel made his presence felt as returned to the field for the first time for NC A&T. After sitting out the first four games, McDaniel had a fourth-quarter strip sack of Bryant QB Zevi Eckhaus that was ruled a fumble as it was picked off in the air by A&T’s Janorris Robertson.

The other defensive star was Kansas transfer Karon Prunty who had two interceptions. The Aggies did not have a sack but held Bryant to 38 rushing yards on 15 carries.

Bryant University, is a private university located in Smithfield, Rhode Island. The school has 3,751 students.