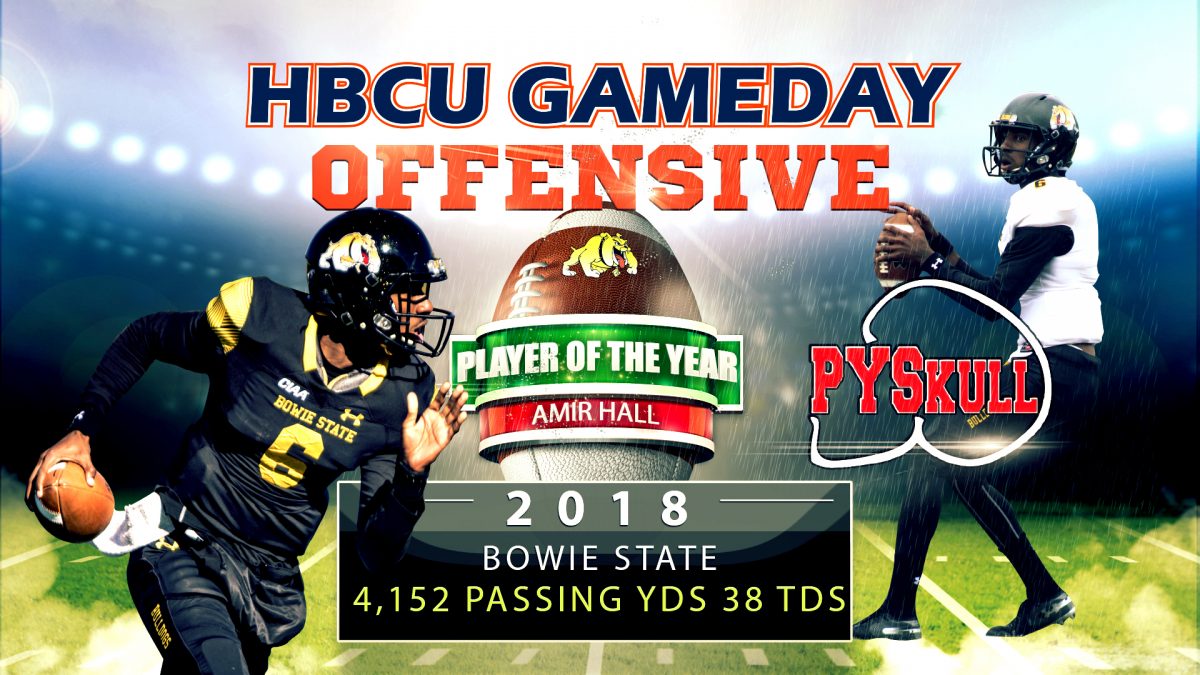 For the second year in a row, Bowie State quarterback Amir Hall is the best offensive player in HBCU football.

It is often said that once you reach the top, there is nowhere to go but down. Bowie State’s Amir Hall has defied that logic.

The record-setting quarterback completed his senior season with a victory lap around the CIAA, a handful of all-time records, a playoff win and now with more hardware. For the second year in a row, Hall is the HBCU Gameday/Protect Your Skull National Offensive Player of The Year.

Hall had a prolific senior season, breaking his own CIAA record with a national-leading 4,152 passing yards to go along with 31 touchdowns to just 10 interceptions. He also led the nation in completions with 354 and through the first three round of the playoffs, no one else has more than 300. He is also second in D2 football with 353 yards of total offense per game.

The numbers are great themselves, but they don’t tell the full story. Hall had to carry even more of a burden early on this season as the team adjusted to the loss of running back Rob Chesson. Maurice Williams and Brandon Abrams would come on late to help compliment Hall’s passing game, but there was a point in the season where the running game and the defense weren’t quite up to speed. That made Hall force some throws he didn’t have to take in 2017 and led to a brief rise in his interception total, but throwing 10 picks out of over 500 passes could be a lot worse.

The competition for the award wasn’t quite as strong as it was in 2017, but it was there. Caylin Newton put up impressive numbers down the road at Howard. Alcorn State’s Noah Johnson has led his team to the Celebration Bowl. Perhaps his fiercest competion came within the conference from Virginia Union running back Tobias Taylor, who led Division II in all-purpose yards with 196.2 per game.

But in the end, it was Hall, the 6’5 standout from Prince George’s County, who came out on top again.

It was a fitting end to the greatest quarterbacking career in CIAA history and one of the best overall amongst all HBCU quarterbacks. He never threw for less than 30 touchdowns or 3,000 yards in his final three seasons, something that very few quarterbacks can say. His team made the CIAA title game in two of the three seasons he was a starter, and went 9-2 the season that it DIDN’t make it to the title game. He lost just nine games in his three seasons, while averaging better than eight wins and guiding his team to the NCAA playoffs in each of his final two seasons.

The good news for the rest of HBCU football, Hall won’t be eligible to win a third time in a row!