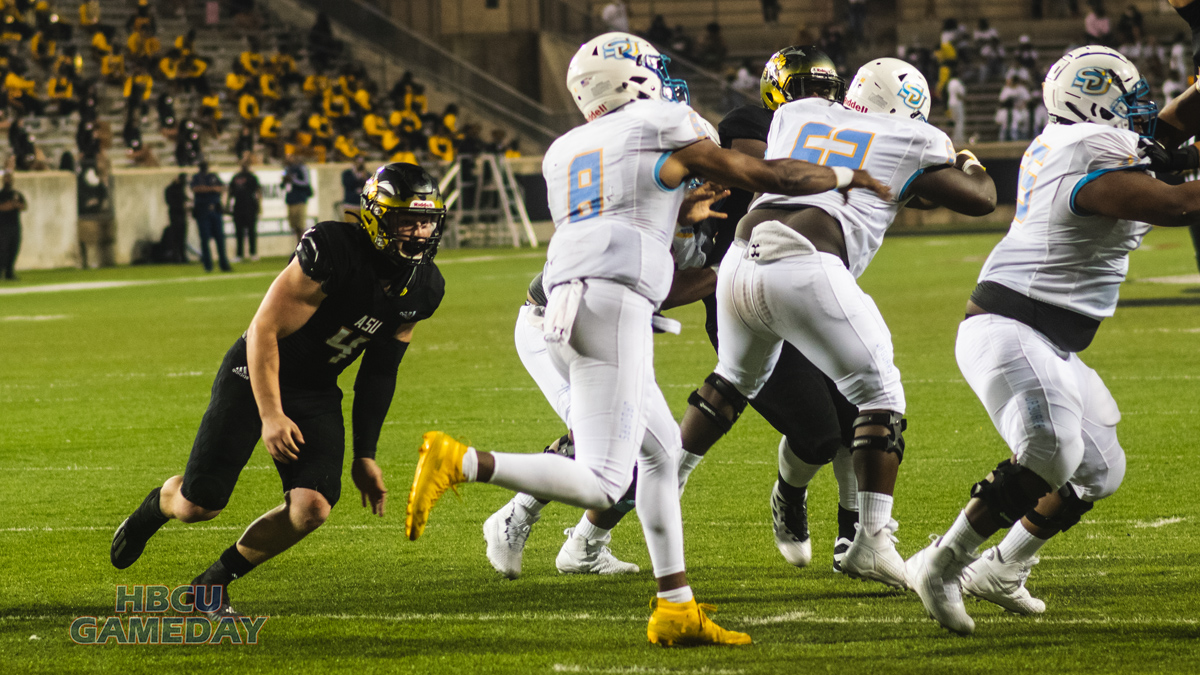 Alabama State had some big moments in the spring 2021 season. But it will have to prove itself again this fall.

Alabama State had a solid spring 2021 season that saw it fall just short of a SWAC Championship Game appearance.

But when the SWAC Predicted Finish was released last week, ASU saw it still had some proving to do. It was picked to finish fourth in the SWAC East behind Alabama A&M, FAMU and Jackson State.

The Alabama State offense will look to build upon a productive spring by SWAC Freshman of the Year Ryan Nettles. Nettles stepped onto the field for the first time this spring after a nasty ACL tear in high school and made some big plays early.

Ezra Gray, the team’s starting running back, says he has quickly become the leader of the offense. And that it didn’t happen by chance.

“It was real important we brought him in with everything that we do,” Gray said at SWAC Media Day. “Whether its meetings that we have with the O-line or other meetings just with the running backs and things like that to really get him to feel as comfortable as possible mandating the huddle.”

“He really took on that leadership role and he’s still carrying that on to this day. Through our summer workouts, making sure he’s a voice, and that he’s not leading only by words but by his actions as well,” Gray said. “Once he gets confident, it’s not a lot of throws he can’t make.”

Gray is also key to ASU’s offensive hopes. The first-team All-SWAC running back ran for 436 yards in the team’s five spring games, including a 195 yard, three-score game against Jackson State on national television.

The receivers will be led by Jahod Booker (18 catches, 2 TDs) and Jeremiah Hickson (13 catches, 3 TDs, 18 YPC). Keep an eye on Wallace Corker who caught six passes for 101 yards and two scores and stands 6’4, 176 pounds. Tight end Terance Ellis is a second-team All-SWAC preseason selection and should be another weapon for Nettles.

The Alabama State defense got plenty of attention in the preseason All-Conference voting. Defensive linemen Christian Clark and Andrew Ogletree were both named first-team All-SWAC, as was defensive back Irshaad Davis. Naytron Culpepper was named second-team All-SWAC.

Colton “Bubba” Adams wasn’t selected to a preseason All-SWAC team, but that could change by the end of the season. The linebacker started the season on fire, recording 11 tackles in a season-opening loss to Southern and forcing a fumble. He added seven more against Jackson State and hurried quarterback Jalon Jones three times. Injuries may have kept him off the all-conference team, but surely all conference offensive coaches know his name.

Alabama State finished the spring season with a 3-2 record, but the only time it wasn’t competitive was the second half of the Magic City Classic after Ryan Nettles got poked in the eye. Obviously Alabama A&M is the defending champion, and Florida A&M only lost one FCS game in 2019. Still, the guys from Montgomery know people don’t think they are as good as they believe they are. But they are also confident in what they are building.

“Our schedule that we got, they sent us to the dogs out the gate. But I promise you, we’re all for it,” Gray said. “We love challenges like that, and we also love adversity as well because honestly, that’s what our team thrives under. When its a big time game or a big-time situation, the freaks come out when the lights go down. So it’s going to be interesting to see but I love it.”