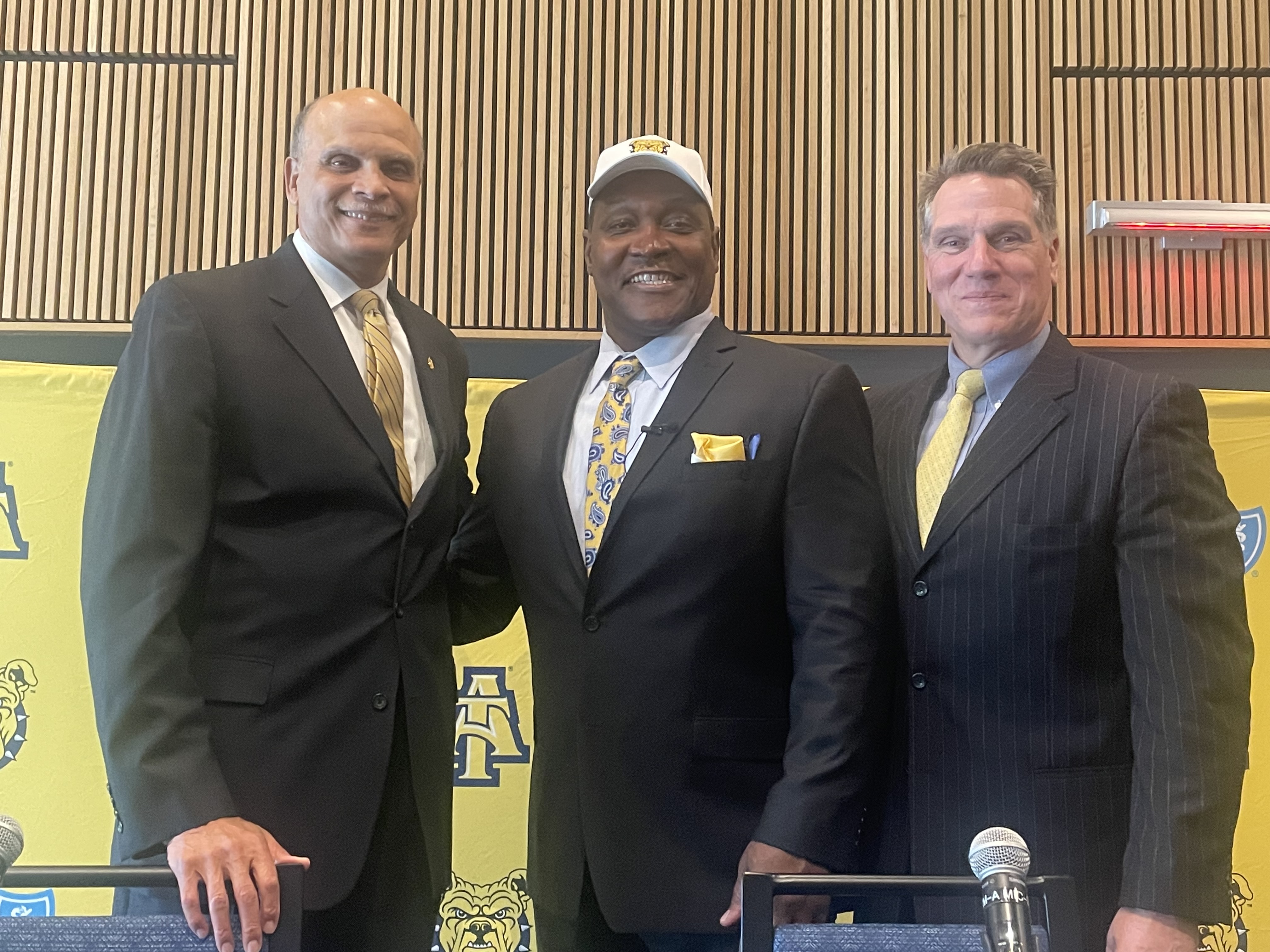 With the move of its football program into the Colonial Athletic Association (CAA) next season, the Aggies will have completely transferred its entire athletics programs from an HBCU conference – the Mid-Eastern Athletics Conference – through the Big South Conference into its new home. The changes happened over just three years.

The move was completed this week as the Aggies announced Vincent Brown as its new head football coach and the face of its most visible and successful program.

In the matter of Sam Washington

The tenure of the previous head football coach, Sam Washington, was no doubt successful. It certainly appeared that way to Aggie fans. Washington won back-to-back MEAC and Celebration Bowl titles before the Aggie brass decided to bolt the MEAC for the Big South early in 2020.

The Aggies sat out the 2020 football season because of the COVID-19 pandemic. They had a sub-par 2021 season after the pandemic wrecked their preparation for it. There was no spring practice in a season where they finished 5-6 overall, 3-4 in the Big South.

The 2022 Big South season under Washington saw the Aggies finish 7-4 overall, 4-1 in conference play. They fell just one final game victory short of a conference title and FCS playoff berth.

Would it have been more difficult to move on from Washington, had the Aggies won the Big South and advanced to the playoffs?

“Certainly, any other factor that would have been introduced into the decision would have made it more difficult or perhaps changed the decision,” A&T Athletics Director Earl Hilton said Monday, while adding his disdain for hypotheticals.

When Hilton and A&T Chancellor Harold L. Martin Sr. were asked Monday what led to the decision to go in another direction with Brown, Hilton’s answer told the story.

“Questions about alignment – alignment of vision and perspective factored in the decision,” Hilton said.

“Earl and I talk extensively about all athletics on a regular basis,” Martin added. “There are probably no weeks to go by where we aren’t discussing areas of opportunity for growth and alignment, competitiveness. Areas where we need to make more investments. We spoke multiple times every week following the football season. And so a significant level of conversation with just the two of us, talking about the future of athletics in general, football in particular. And Earl’s response reflected the outcome that was very significant and very tough discussions that we did have following this past football season.”

Alignment and vision: What that means?

What I take from those answers is that A&T wants to soar. MEAC, Celebration Bowl and even Big South titles are OK but the Aggie brass wants to fry bigger fish – even if their plans have not won over all the alumni, former players and fans who long to continue the HBCU-centric traditions.

Martin and Hilton want to soar with the Eagles of the collegiate athletics world. And by Eagles, I don’t mean just CAA Eagles, inarguably the best FCS program in the land. That’s just the next hurdle. They recognize that NC A&T will always be an HBCU, but they don’t just want to do ‘HBCU’ things.

In order to do that, they must compete, both athletically and academically, outside the HBCU environment. In fact, they can’t just compete, they must win.

It’s a big ask, but one that Martin, Hilton and Brown – as well as the rest of the A&T athletic programs – are preparing to tackle.

Toward that end, Hilton announced at Brown’s press conference that NC A&T will soon be launching an $80 million to $100 million capital campaign, just for athletics! Those are FBS-type numbers (Hint, hint). And a campaign of that amount has never been done at A&T or at any other HBCU.

NC A&T: The path ahead

No one has done more on this path than what Deion ‘Coach Prime’ Sanders did at Jackson State over the past two-plus years.  I was one of those hoping that he would stay at JSU. He was well-positioned to elevate HBCUs, particularly Jackson State, perhaps beyond the SWAC. I thought he had that potential.

But as former Grambling and NFL quarterback Doug Williams told me recently, it was just “arithmetic’. His $5 million to $5.9 million salary at Colorado is more than NC A&T’s ($3.1 million to 3.4 million) or Jackson State’s ($2.1 million) entire football budgets, combined!.

He played in a stadium with over 60,000 available seats that he nearly filled to capacity each time out. Sanders lured an attractive list of corporate sponsors to get on board with the Tigers and make significant contributions to enhance the school’s infrastructure and bottom line. Coach Prime garnered the kind of publicity and coverage across all major media platforms – on television, the internet and on social media – that heretofore only Power 5 schools have been able to generate. He increased JSU’s enrollment, helped bring national attention to the city of Jackson (Ms.) and its struggles and was a boon for the local economy. City officials said nearly $13 million was generated from just two games this season.

And perhaps most importantly, he lured elite players away from FBS institutions to build a winner (Celebration Bowls not withstanding) at JSU practically overnight.

And he did so on the strength of his outsized personality and charisma. He was his own capital campaign.

Duplicating or surpassing Sanders’ numbers or his impacts will be hard to do at NC A&T in its present configuration.

NC A&T is making a bold move into the unknown. Much like in chess, the rules are fixed but the outcomes are unknown. The successful moves you make will determine the outcome.

The coaching change is just an opening move. Getting the support of the sometimes hard-to-please Aggie faithful is part of the game.