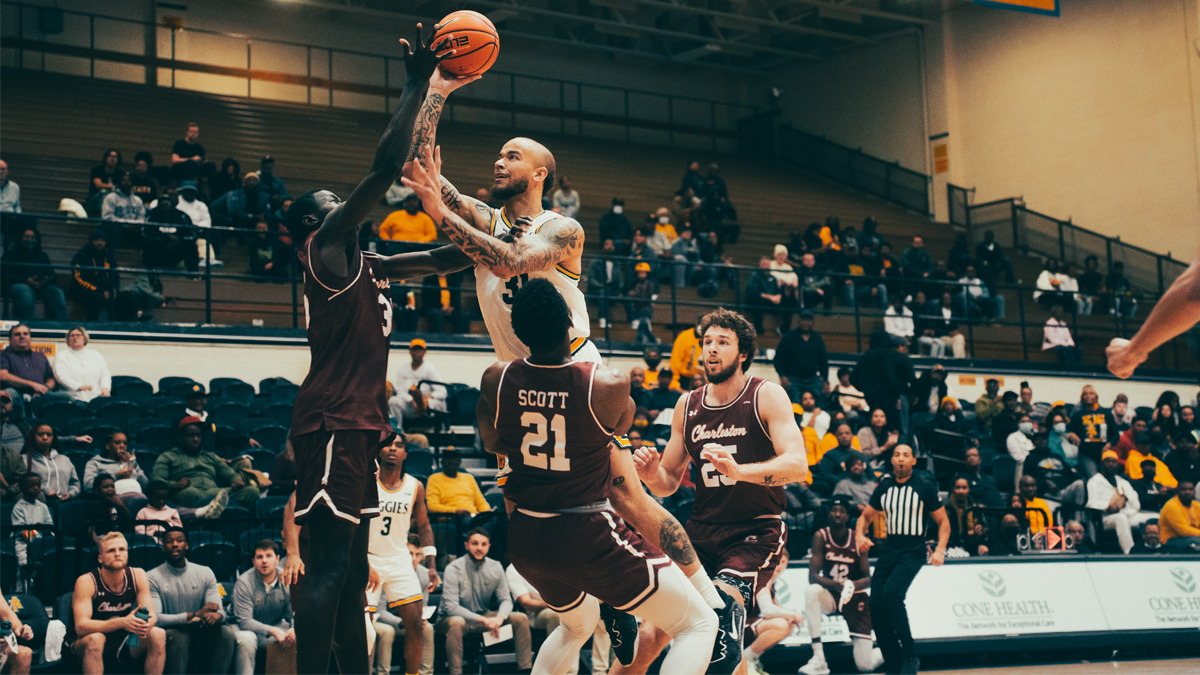 Long, tough journeys and increased competition come with the territory as NC A&T joins the CAA.

NC A&T’s baptism into the Colonial Athletic Association (CAA) and into the ever-developing world of DIv. I college athletics has begun.

Things have been quite revelatory three games into the maiden CAA voyage for the men’s basketball team and two games in for the women.

Eight- or nine-hour Florida road trips to Daytona Beach (Bethune-Cookman) and Tallahassee (Florida A&M) are things of the past. Nine- to 12-hour treks to Boston (Northeastern) and Hempstead, NY (Hofstra) are the new normal. That was the men’s program’s first CAA road trip last week that some considered more brutal than the trips South. At least the trips to the Sunshine state didn’t involve the cold or the traffic of the Northeast. The Aggies finished a respectable 1-1 on that trip.

Wednesday, the Aggies welcomed in a nationally-ranked conference team to Corbett Center, 14-1 CAA leader Charleston (S. C.). The 23rd-ranked Cougars, whose only loss was to then No. 1 North Carolina, brought with them a national TV audience on the CBS Sports Network as they took down the Aggies, 92-79. The NC A&T game story said the game “marked the first time a nationally-ranked program played inside Corbett and the first time the Aggies faced a conference opponent who was nationally ranked.”

Next up for the the A&T men is a home date Saturday against 13-3 UNC-Wilmington, the second-place CAA team. Like Charleston, UNC-W lost to UNC, and also has losses to Oklahoma and then undefeated and now 14-2, No. 25 Connecticut.

Welcome to the CAA.

Long, tough journeys are just beginning for the NC A&T program that cited extensive travel and loss of class time among other factors for its decision in 2020 to leave the Mid-Eastern Athletic Conference to join the Big South Conference before jumping to the CAA in early 2022.

The next journey North for the NC A&T men comes in mid-February when they travel to Stony Brook, NY (Stony Brook), West Long Branch, NJ (Monmouth) and Towson, Md. (Towson). They are spared an eight-hour trip to Philadelphia (Drexel). The Aggies will only face the Dragons at home in Greensboro.

The 2-0 Lady Aggies got to stay local relatively, with wins at home vs. Elon and on the road at nearby Charleston (S. C.) to open their CAA schedule last week. Their first long distance CAA road trip will be of the nine-hour variety this week to West Long Beach, NJ (Monmouth) and Hempstead (Hofstra).

By the way, did you know the CAA got five teams (Delaware, New Hampshire, Richmond, William & Mary and Elon) in the Football Championship Subdivision (FCS) playoffs this season. When has that happened in the MEAC or the Big South?

While on the subject, the CAA’s new 14-member football roster, once NC A&T joins next year, will include members in Philadelphia (Villanova), Albany, NY (UAlbany), Kingston, New Hampshire (New Hampshire), Durham, Rhode Island (Rhode Island) and Orono, Maine (Maine). Those are road trips of 7 to 18 hours by land. The long journeys have just begun.

The only hope to bring some regional sense to this travel madness is for the CAA to split into North and South Divisions and limit the long forays. CAA Commissioner Joe D’Antonio, who was at the Aggies’ game Wednesday and sat with NC A&T Athletics Director Earl Hilton, has said the conference will consider that option.

The optimum word for what’s going on at NC A&T and in college athletics in general now is change. And money – big money! Some may lament the shifts taking place at A&T’s mid-major level. Contemplate, if you will, what happens when a UCLA or Southern Cal leaves the PAC-12 to join the Big Ten, as each has proposed. UCLA and USC will be travelling from the West Coast to the East coast to face the likes of Penn State, Ohio State and Maryland – in every sport.

The travel is mind-boggling. But so is the potential payoff.

181
The Latest in HBCU Sports and Culture