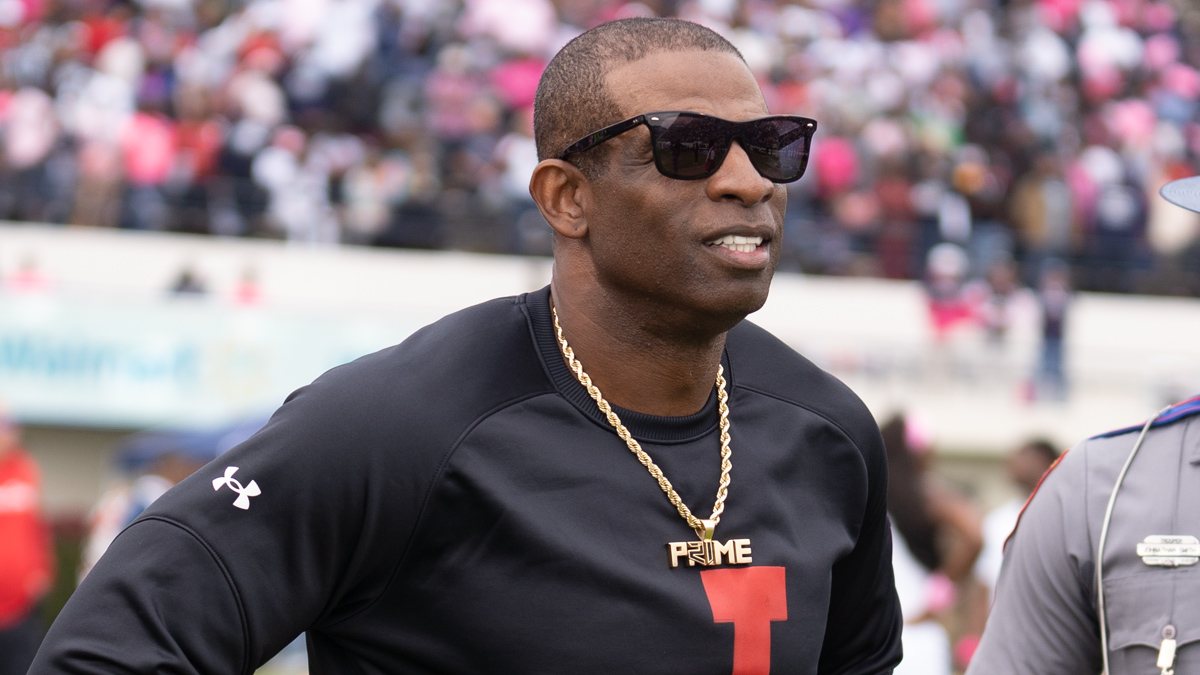 There were so many big Deion Sanders-related stories in 2022 we had to give them their own top 10.

Deion Sanders is now the head coach at Colorado, and T.C. Taylor is now the lead man at Jackson State. We know this. But it’s impossible to tell the story of HBCU sports in 2022 without a detailed recounting of what happened with Coach Prime and JSU over the 300-odd days he was at the helm in Mississippi.

Former NFL linebacker Channing Crowder previously told Deion Sanders he wouldn’t be able to get a Five Star prospect to pick Jackson State over a Power Five program. Of course, he did just that by flipping Travis Hunter from FSU to JSU. So Crowder, who moved from “I AM ATHLETE” to “The Pivot,” gave him an apology — with a caveat.

“I do have a but,” Crowder said following his apology. “I just don’t know if Deion is going to be there (long enough) for Travis Hunter to graduate.”

Not only did Sanders bring his two youngest sons — Shilo and Shedeur — to play for him. He also got his daughter in the fold, as she committed to Jackson State and played for head coach Tomekia Reed. She hasn’t played much, only garnering time in two games and scoring a total of two points. But she hasn’t hit the transfer portal yet.

One of the hottest shows of 2022 was P-Valley, a colorful show that focuses on a strip club in a fictional Mississippi City. Sanders spoke about his affinity for the show over the summer and invited the cast to come to a game. They did just that at Jackson State’s homecoming, where Sanders and the cast gave each other their flowers prior to the game.

Sanders and Jackson State got a visit from former Texas Southern star and Pro Football Hall of Famer Michael Strahan in October, as his friend and business partner brought GMA to Jackson to highlight not only the football squad, but the marching band and the school as well.

GMA wasn’t the only major media to come to Jackson to capture the story of Deion Sanders and his squad. 60 Minutes did the same a few weeks prior, giving the coach, the team and the school another high-profile media appearance.

Shedeur Sanders had a great sophomore season, and his father wasn’t shy about letting everyone know. After a fast start to the season, Sanders began pushing his son as a serious Heisman candidate despite the fact that Jackson State is an FCS program. Several analysts agreed that Shedeur’s prolific season was worth some consideration. Ultimately he didn’t win that award, but he is up for the Walter Payton Award, given annually to the top player in FCS football. He won our FCS Player of the Year Award as well.

The summer was a pretty quiet one by Deion Sanders. At least it was until Nick Saban made comments accusing Jackson State of ‘paying for players.” That remark came on the heels of Sanders landing Travis Hunter, widely considered the top recruit in the 2022 class. Sanders wasted little time in refuting the claim of the Alabama coach, whom he has shot commercials with and considers a friend. The two reportedly patched things up, but it made for some interesting online theatre for a couple of days.

As big as Good Morning America and 60 Minutes coming out to Jackson were, College Gameday setting up shop outside Mississippi Veterans Memorial Stadium was even bigger. College Football’s premiere show had only visited an HBCU once (Florida A&M back in 2008), so it was a very big deal. The show drew a healthy crowd which included HBCU fans from all over as well as college football fans at-large.

There is a solid case to be made that this was the biggest moment on this list of all. After a highly contested game against Alabama State, Deion Sanders and ASU head coach Eddie Robinson Jr. met at mid-field and shook hands. But when Sanders went in for an embrace, Robinson stiff-armed him, and Sanders shoved his hand in a heated moment. Afterward, Robinson explained why he was annoyed and while he praised Sanders for the job he had done with the program, he declared that he was ‘SWAC” and Sanders was not.

In his press availability, Sanders took issue with the suggestion that he was not SWAC, and then proceeded to go on a soliloquy that took on a life of its own. The press conference was watched by millions, and ultimately mixed by DJ Suede the Remix God, into a song that took over social media and even Mississippi Veterans Memorial Stadium.

It was simply a one-of-a-kind moment that won’t be forgotten.

1. Coach Prime has left the building

Deion Sanders made it clear all summer and into the fall that he would entertain other offers for his coaching services. With his team’s on-the-field success and his recruiting credentials, Sanders’ name found its way into pretty much every potential Power Five opening throughout the season. The week of the SWAC Championship Game Sanders confirmed that he had been offered the head coaching job at Colorado. The day before the game it was reported that he would be the new head coach at Colorado. After the team’s win against Southern in the SWAC Championship Game, Sanders informed his team that he would be taking the job at Colorado.

Sanders stayed on to coach his team at the Celebration Bowl, as JSU fell 41-34 to North Carolina Central in overtime, bringing his historic and entertaining run as an HBCU coach to an end. Sanders’ move sparked all kinds of reactions and emotion on both sides, igniting fierce debate as to whether or not he had lived up to his promises to JSU and the HBCU world. No matter what side of the debate you fall on, it is undeniable that Deion Sanders was the big HBCU story of 2022.