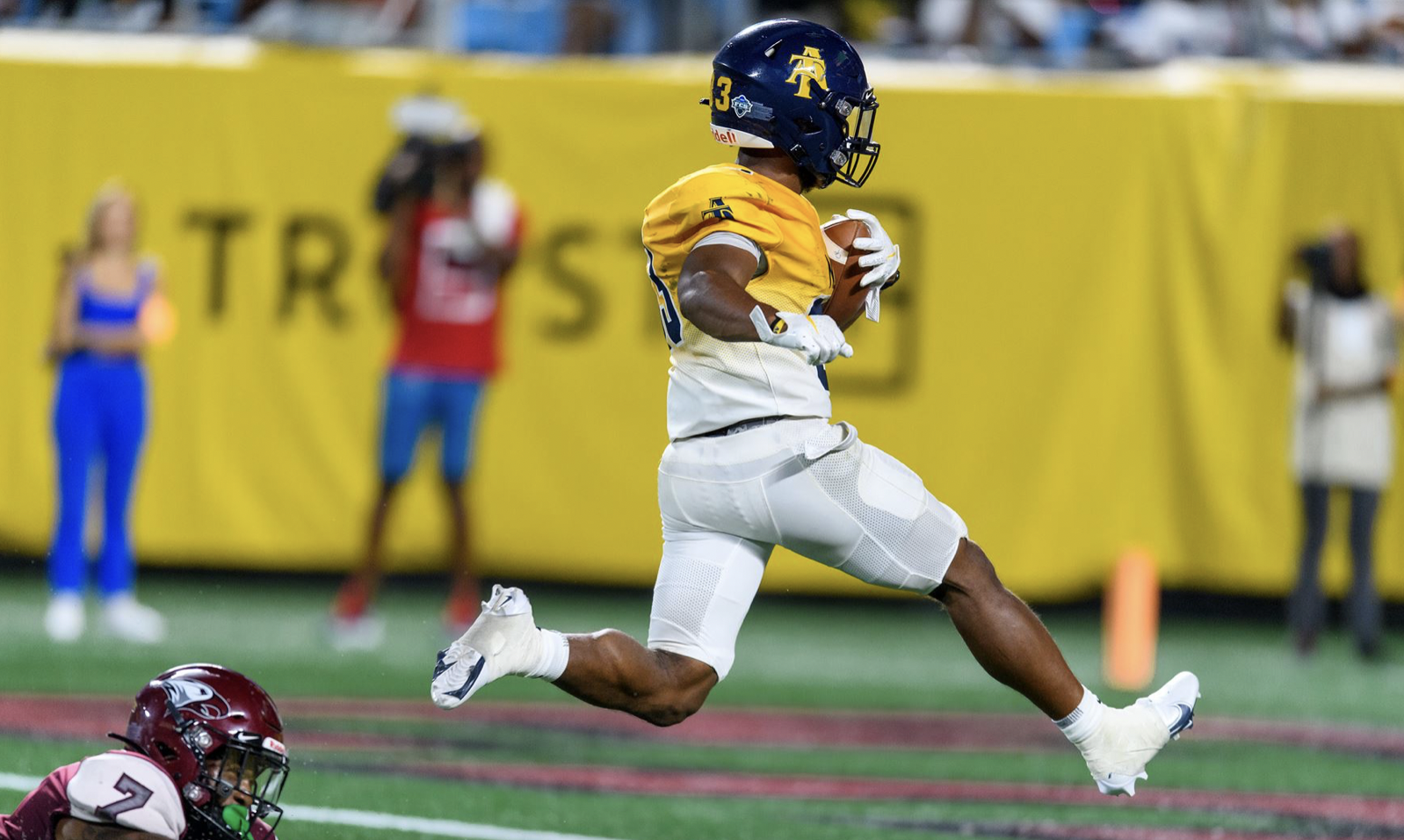 Both Jackson State and Tennessee State were impressive in Week One – JSU in a win and TSU in a loss.

Eddie George’s TSU Tigers (0-1) gave up a late fourth-quarter touchdown in falling 36-29 on the road in Cheney, Wa. to nationally-ranked Eastern Washington. EWU is ranked 11th nationally (up from 12th) in the AFCA FCS poll.

TSU will see if they can slow down JSU and quarterback Shedeur Sanders who carved up FAMU (29 of 33) for 323 passing yards and five TDs. They meet in Memphis Saturday (6 p.m. CT, ESPN+) in a big HBCU FCS match up at the 33rd Southern Heritage Classic.

Many considered FAMU the second-best HBCU team to JSU entering the season. If so, Sunday’s decision shows a wide gap between JSU and the rest of the field. Sanders’ Tigers are up from 17th to 15th in this week’s American Football Coaches Association (AFCA) FCS poll.

FCS match up: TSU no slouch

But let’s not crown Jackson State so fast. Eddie George’s TSU Tigers may have something to say about that.

George’s squad outgained EWU in total yardage 547-474. The Tigers rushed for 290 yards led by a career-high 207 yards in 25 carries by all-OVC running back Devon Starling. Starling had a 43-yard scoring run vs. EWU.

Austin Peay transfer quarterback Draylen Ellis also had a good outing. The fellow all-OVC selection threw for 257 yards (17 of 27) and two touchdowns with one interception. Ellis and Starling were OVC co-freshmen of the year in the 2020-21 season.

While Sanders has been loudly touting his J-State squad George has quietly assembled a T-State team that may challenge JSU.

Perhaps adding to the intensity of this rivalry is that JSU is pulling out of the classic after this season. Sanders says his only reason for going to Memphis is to ‘dominate’ TSU.

NC A&T (0-1) fell to NC Central 28-13 Saturday at the Duke’s Mayo Classic in Charlotte, N.C. It was the first loss for the Aggies in the last six games vs. the rival Eagles.

Rebounding will be tough as they travel to Fargo, North Dakota Saturday (1:30 p.m. DT, ABC ND, ESPN+) to face the Bison of North Dakota State.

The Bison (1-0), ranked first in the AFCA FCS poll, have won nine of the last 11 FCS national championships. They went 14-1 a year ago and captured the FCS title in a 38-10 win over Montana State in the championship game.

This game was on the 2020 schedule but was called off when A&T did not play that season because of the COVID-19 pandemic. It was to be billed as the ‘FCS best’ vs. the ‘HBCU football best’ as the Aggies were coming off two straight Celebration Bowl wins and HBCU national championships.

A lot has changed since then. NDSU has continued to roll while the Aggies struggled to a 5-6 finish a year ago, their first losing season in 12 years.

The FCS vs. FBS match-ups continue this Saturday as Alabama State and new head coach Eddie Robinson Jr. take their 2-0 record out to the Rose Bowl in Pasadena, California Saturday (2 p.m. PT, PAC-12 Network) to take on UCLA. It is Alabama State’s first game in California and the first time UCLA has played an HBCU in football.

UCLA Athletics Director Martin Jarmond’s late mother Virginia is a NC Central graduate while his father is an NC A&T alum. UCLA will entertain NC Central in football in the 2023 season.

Defending SIAC champion Albany State started its season on the right foot with a 28-14 win over Mississippi College.

It will be interesting to see how FAMU and head coach Willie Simmons respond after the beating it took from Jackson State when the Rattlers (0-2) entertain the Golden Rams (1-0) and head coach Gabe Gardina Saturday in Tallahassee (6 p.m. ET). Albany State is up from 18th to 15th in the AFCA Div. II poll. It is the first game of the season to be shown on HBCUGo TV.

Three-time defending CIAA champ Bowie State (1-0), ninth in the AFCA D2 poll, travels to Saginaw Valley State for a 1 p.m. contest Saturday. This will be the second HBCU Celebration Game after the UNC/FAMU game that opened the season. SVSU was impressive in a 72-0 shellacking of West Virginia Wesleyan to open the season Saturday.

West Georgia is tenth in the D2 poll and plays at Morehouse Saturday (6 p.m. ET).

NC Central (1-0) has another backyard brawl as it hosts former CIAA rival Winston-Salem State Saturday (6 p.m. ET, ESPN+). Hampton is hosting Tuskegee Saturday (6 p.m. ET, FloSports) in what could be called the ‘Booker T. Washington Classic’ as the legendary figure was instrumental in the founding of both institutions.