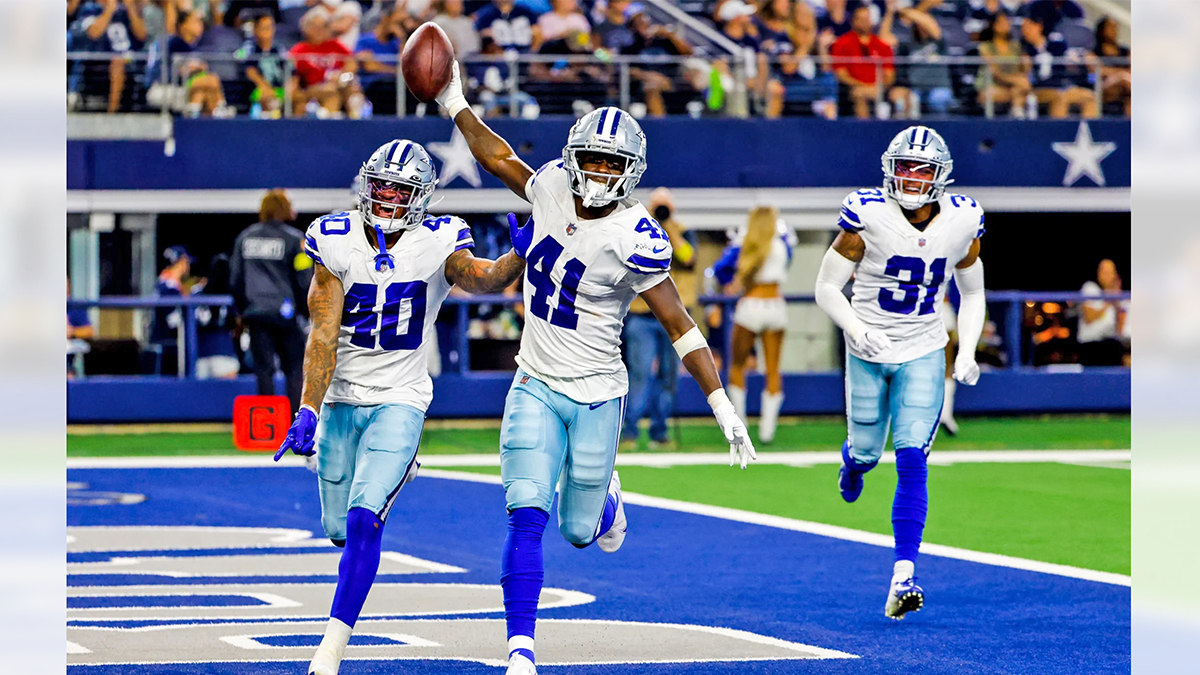 Former Florida A&M standout safety Markquese Bell with the Dallas Cowboys and former Norfolk State pass rushing specialist De’Shaan Dixon with the Jacksonville Jaguars both emphatically made cases to be on their teams’ final 53-man roster with their play this week.

NFL teams will cut down from 80 to 53-man opening day rosters on Tuesday. The teams will then designate 16 players for their practice squads. The NFL regular season kicks off on Thursday, September 8 when the Super Bowl champion LA Rams host Buffalo.

Bell picked off a pass from Seattle QB Drew Lock and had four solo tackles in the Cowboys’ final preseason game Friday vs. the Seahawks. Steven Bell of the Dallas Star-Telegram has more on how Bell solidified his chances of making the final roster.

Dixon was perhaps even more impressive leading the Jaguars with eight tackles, including an 11-yard sack of Atlanta QB Desmond Ridder and another tackle for a loss of three yards vs. the Falcons. Justin Lewis of the Florida Time-Union penned a story about Dixon’s efforts in camp.

Both have excellent chances to make their teams’ 53-man roster. Neither is likely to be cut.

Two other rookies, both drafted this season, finished off their preseason with impressive showings.

Former Fayetteville State defensive back Joshua Williams, the first HBCU player drafted this season by Kansas City in the fourth round, led the Chiefs in their preseason finale vs. Green Bay with five total tackles. Williams has been impressive throughout the preseason.

Cobie Durant starred at South Carolina State and was taken by the Super Bowl champion LA Rams in the fourth round. He had a similar output. He started his second preseason game and posted three total tackles vs. Cincinnati.

New York Giants punter Jamie Gillan out of Arkansas-Pine Bluff boomed five punts for an average of 55.6 yards per punt including a 67-yarder in his final preseason game vs. the New York Jets.

– #41 MARKQUESE BELL, S, Dallas (1st season, FLORIDA A&M) – The free agent rookie started at safety for the Cowboys in 27-26 win over Seattle finishing with four solo tackles, one interception and one pass defended while playing 72 defensive snaps (97%) and 13 special teams’ snaps (39%). With his performance and pick, Bell appears to have solidified his spot on the 53-man roster as the Cowboys prepare to open at home vs. Tampa Bay on NBC’s Sunday Night Football on Sept. 11.

–  #71 TYTUS HOWARD, OG, Houston (4th season, ALABAMA STATE) – Former first round pick started at right tackle in 17-0 win over San Francisco getting in on 36 plays on offense (63%) and one special teams’ play (5%). The Texans rushed for 156 yards and a touchdown, passed for 94 yards and one TD and surrendered three sacks.

– #14 COBIE DURANT, CB, LA Rams (1st season, SOUTH CAROLINA STATE) – Started at cornerback for Rams in 16-7 loss to Cincinnati and had three total tackles, two solos and one assist on defense. Durant was in on 47 defensive plays (77%) and three on special teams (16%).

Before the Tuesday, August 30 cutdown from 80 to 53 players