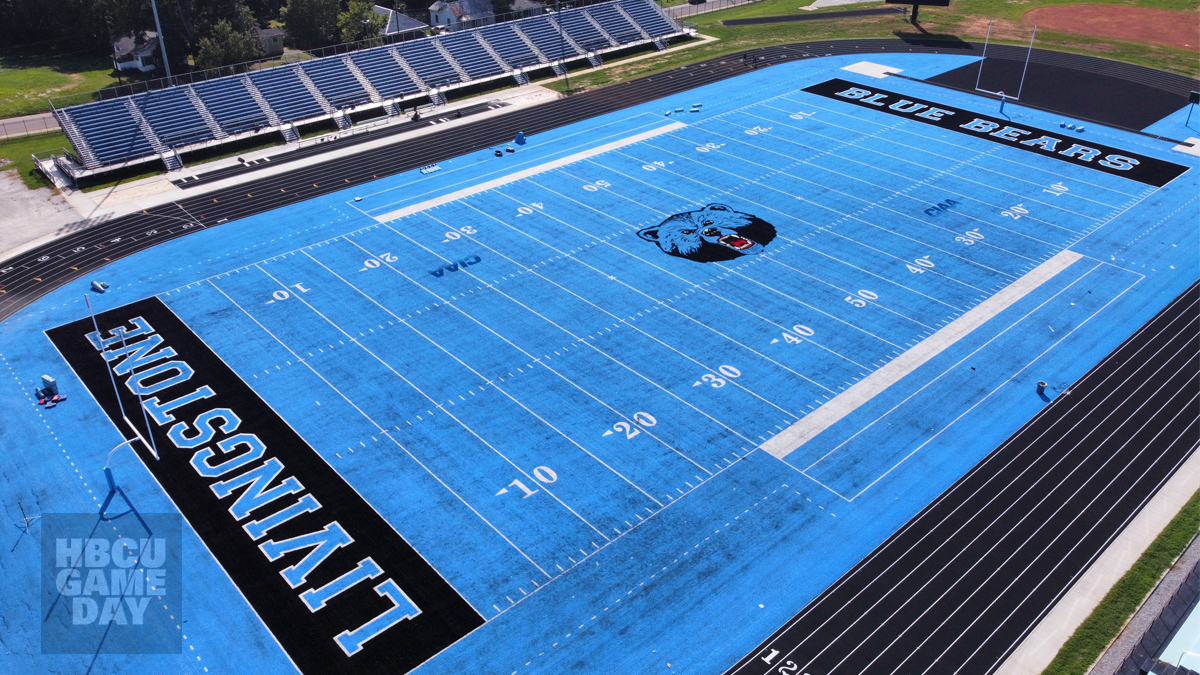 Livingstone College hoping future is as bright as blue turf

Sean Gilbert is calling on his high school football roots and a revamped coaching staff to improve Livingstone College in 2022.

SALISBURY, NC — Livingstone College head coach Sean Gilbert is no stranger to championship football, having played his high school career in western Pennsylvania, where the likes of Dorsett, Montana, Marino and Namath began their respective paths to success.

With preseason practices underway, the second-year coach would like his young team to recognize his background and be energized by it as they try to rebound from a one-win season in 2021 and exceed expectations to finish at the bottom in the Central Intercollegiate Athletic Association this season.

“I just shared with my kids a little bit about where I come from and helping them to understand that the pedigree and the mindset to compete and win started when I was young,” says Gilbert, whose 11-year National Football League career includes a five-year stint with the Carolina Panthers. “Coming from a tradition of what we do, and we bring that in, I bring the same energy to coaching …”

When Gilbert says kids, he’s not kidding. The Blue Bears have approximately 40 freshmen and about as many second-year players. That could be the prime reason that Livingstone was picked to finish tied for fifth in the CIAA’s South Division.

“We don’t worry about what the polls say. That’s fair to put somebody where you think they should be,” Gilbert said. “But it’s up to us to prove that to be different. And so, there’s no complaints in terms of where we are in trying to grow what we do.”

To help his youthful roster find a way out of the CIAA cellar, Gilbert revamped his coaching staff. He has a new offensive coordinator, a new offensive line coach and a new wide receivers coach. Gilbert is expecting junior quarterback Lazarus Anderson to locate his targets in a new system, and that outside linebacker Terrance McPherson Jr. will continue the play from a freshman year in which he collected 21 tackles in a two-game stretch, and fellow linebacker Jaden Echols, who had 65 tackles in 2021.

“We have the turtle walk, but still have to expect to win at the end, just like the turtle does,” Gilbert said. “The rabbit’s going to be the rabbit. And, in so far as we are concerned, we have to focus on ourselves.”

While Gilbert was revamping his coaching staff, Livingstone College was making changes to its home field. When the season opens against cross-town rival Catawba on Sept. 3, the teams will be playing on a light-blue artificial surface, a first for HBCUs and one of the few non-green playing surfaces in college football. The new field resulted from the efforts of Pro Football Hall of Fame member Willie Lanier, who raised $1.1 million to replace the old grass at Historic Hovey Stadium with field turf. Lanier also aimed to replace fields at other HBCU football fields. Some changes have been completed or are underway.

Livingstone and cross-town rival Catawba used to square off for the Mayor’s Cup Trophy, but that hasn’t happened in a few years. Gilbert says he hopes to see the gane resumed, but he suggests that his team has its eyes on other things.

Livingstone College hoping future is as bright as blue turf