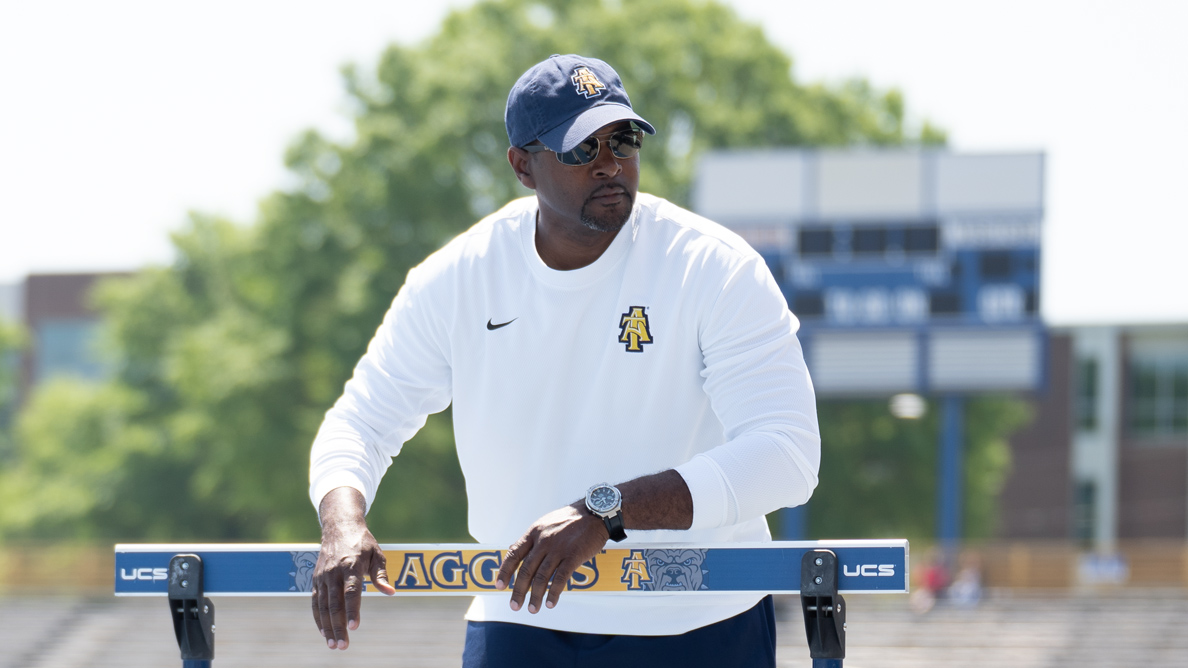 Tennessee AD Danny White called the NC A&T Director of Track and Field programs one of “the best track & field coaches in the world today.” That’s why he wasted no time in choosing Ross as the new man to run the Vols program.

Duane Ross, the ultra successful director of track & field programs at NC A&T, was hired Tuesday to lead the Tennessee track and field programs. The surprising and sudden move came less than a week after the Vols parted ways with their previous head coach.

According to the Knoxville News-Sentinel, Beth Alford-Sullivan, who had been director of the UT track & field/cross country program for eight years, was let go on Thursday, May 19. Her contract, set to expire June 30, paid Alford-Sullivan an increase of $10,000 per year, ending with $230,000.

According to the University of North Carolina system database, Ross, who had been at A&T since 2012, had a base salary of $236,250 with incentives and bonuses that raised his total compensation to over $300,000. Who knew A&T paid more to its head track and field coach than Tennessee and many of the programs in the SEC?

Though the Mid Eastern Athletic or Big South Conferences can’t touch the SEC in terms of level of competition, Ross’s troops were dominant. They thrived in the MEAC before the Aggies moved over to the Big South this season.

With commanding efforts on the last day’s sprint events, the Aggies finished runners-up to High Point in both the men’s and women’s 2022 Big South outdoor championships two weeks ago. The Aggies lost the men’s title by one point (178-177). They actually left the competition with the women’s title but surrendered it last week after one of its athletes was determined to be ineligible.

Perhaps more importantly, Ross made the Aggies a force on the national scene. Ross was building a budding dynasty at A&T. The A&T men and women both finished an up-and-coming 15th in the 2019 NCAA Outdoor season.

At this year’s NCAA indoor season, the A&T men went into the final event, the 4×400 meter relay, trailing Texas 37-35 with a chance of winning the national championship. A poor showing in the 4×4 – they finished eighth in their premier event – left them second with 36 points to the Longhorns, who won the event and the national championship with 47 points.  The Aggies had won the 2021 indoor and outdoor 4×400 relays.

So, it’s obvious why Tennessee thought so much of the job Ross had done. It’s also why UT Athletics Director Danny White said in the statement on Ross’s hiring, “When researching the best track & field coaches in the world today, it doesn’t take long to find the name Duane Ross.”

White also made mention of Tennessee’s “extraordinary history of national championships teams, individuals and dozens of Olympians” in his statement. The UT men and women’s programs have won a combined eight team national championships — five by the Vols and three by the Lady Vols. The last title for the women was the 2009 indoors and the men were last champions in the 2002 indoors.

What Ross can expect at UT

“We thought Virginia Tech had great facilities until we got to Tennessee,” Alan said. The elder Hooker says Ross will have plenty to work with at Tennessee.

“For one,” Hooker said Wednesday, “(UT Athletics Director) Danny White is tremendously committed to insuring all the sports there are successful. The amount of resources available for athletes from nutrition, medical treatments, weight and training facilities are top notch in the country.”

A&T’s Truist Stadium and modern Marcus T. Johnson Track has become one of the country’s premier track and field facilities and bolstered Ross’s recruiting efforts. It has attracted elite youth and high school track events like the AAU Junior Olympics and those put on by Nike, New Balance and others. In 2013, the Aggies hosted the NCAA East Regional Preliminary Round and in 2020, the Aggies hosted the NCAA Division III Men’s and Women’s Outdoor Track and Field Championships.

Alford-Sullivan had eight assistants at UT. Ross will likely have as many. Ross had three assistants at A&T. White has also said he would work with Ross to identify an elite distance coach to oversee Tennessee’s cross country program.

The News-Sentinel updated a story Wednesday indicating that Ross signed a five-year deal for $450,000 annually. Its initial story Tuesday said the financial arrangements were not disclosed. The amount would put him near the top of track and field/cross country head coaches in the SEC and around the country.

According to the most recent data, Georgia’s track and field director Caryl Smith Gilbert and Michael Holloway of Florida have the highest compensation packages in the conference. Smith Gilbert, who was hired at Georgia in June 2021 after leading the Southern Cal women to the 2021 NCAA Outdoor title, earns $500,000 per year. Holloway, who has ten NCAA titles in 20 years at Florida, has a total compensation package of $462,000. Holloway was the U. S. Track & Field head coach for the Tokyo Olympics.

Pat Henry’s package as Texas A&M’s director of track & field/cross country pays him a base salary of $421,894 according to published information. LSU head track and field coach Dennis Shaver has a base salary of $370,000. Shaver led LSU to the 2021 men’s NCAA Outdoor title. Texas A&M under Henry finished second in 2021 in the women’s NCAA Outdoors.

The time is now

Ross will get a look at some of the Tennessee athletes he will inherit next season during this week’s NCAA Div. I East Preliminary at Indiana University. The Vols will have 33 athletes competing at the regional. Freshman sprint sensation Favour Ashe entered Wednesday’s competition with the top 100 meters time at 9.94 seconds. He won his heat in 10.14 to advance to Friday’s quarterfinals.

In their last outing under Ross, the Aggies will have 25 athletes at the East Prelims. Junior quartermiler Randolph Ross Jr., the coach’s son, comes in with the best 400 meter time at 44.61. Ross Jr. clocked 45.86 Wednesday to advance with the fifth best time. Senior Cory Poole came in with the top time in the 400 meter hurdles (49.42). Poole won his heat and advanced Wednesday with a time of 50.76.

When Alford-Sullivan was hired in June 2014, she became the first female in SEC history to oversee a men’s program in any sport.  Ross becomes the only black head coach at UT in any sport and the fourth in school history. J.J. Clark led the track program from 2009 to 2015. Wade Houston (1989-94) and Cuonzo Martin (2011-14) led the men’s basketball program.

The task for Duane Ross ahead

Tennessee did not win an SEC indoor, outdoor or cross country during Alford-Sullivan’s tenure.  The best indoor finish for the women was tied for fourth in 2016. The Vols were also fourth outdoors in both 2016 and 2018.  For the men, they werer fifth indoors in 2020 and sixth in the outdoors in 2018.

The Tennessee men finished third (83 points) behind Arkansas (120) and Alabama (114) in the 2022 SEC outdoor season. It was the best performance for the men’s team since 2008 when they also finished third. The Vols women’s team finished ninth with just 34 points.

The top-three finish for the men, Alford-Sullivan said after the meet, was “a really big deal. This is the best conference in the world.”

It was not enough.

Ross will coach the Aggies through this week’s NCAA Preliminaries and at the June 8-11 NCAA Championships in Eugene, Oregon. He penned some parting words on the A&T athletics website Wednesday.

“I can’t thank you enough for all the love and support you’ve show me the last ten years,” the statement read. “What we’ve accomplished as a program couldn’t have been done without your energy, support and encouragement. Please know that my decision to continue my journey elsewhere was one of the toughest I’ve ever had to make; And it’s because of the relationships I’ve formed with all of you. I want you all to know that I believe in the vision of Athletics Director Earl Hilton.

“His guidance these last 10 years has helped me become the coach I am today. He will continue to take this athletics program to higher heights.”

That will be a tall task.