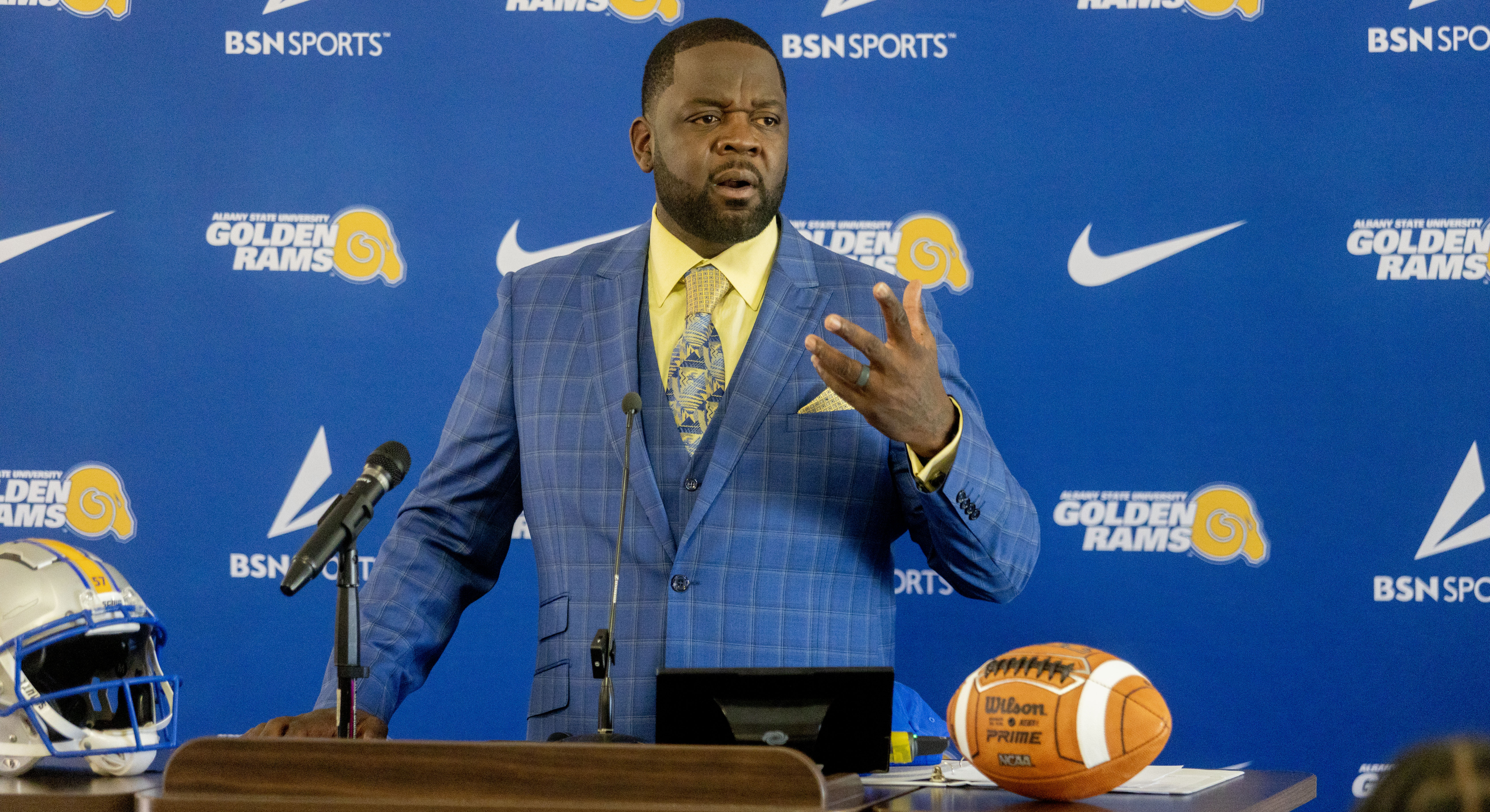 In the midst of coaching chaos, Quinn Gray to Albany State is an important return to HBCU football culture as we once knew it.

If the culture ever needed a football coach to be a peacekeeper, it was the amazing display for the announcement of Albany State University head coach Quinn Gray.  Though not as sensational as what has been going on in the HBCU coaching realm as of late, it represented who we are and a sense of normalcy.  Gray, dressed in a brand new blue suit with yellow pinstripes, a yellow shirt, and a yellow and blue tie, he was manicured and stood tall representing what was pleasing to a unified Golden Ram nation.

University President Dr. Marion Fedrick rushed from another meeting to be sure she was present.  Director of Athletics Tony Duckworth moderated the event.  Alumni, boosters and former players were all on one accord that Quinn Gray had their support.

Gray’s wife Shemeka was stunning in her blue dress with gold trim, while Gray’s son and mother also attended the press conference.  All of the visuals set the tone for an exciting press conference.

Gray addressed the packed-out Lovett Hall in what I could only describe as “Obama-esque.”  He was methodical in detailing his experiences and how they’ve prepared him for the job.  “Being a coordinator at Florida A&M, an assistant coach at Alcorn, a high school head coach and an analyst at a Power Five school (Memphis), it prepared me from all angles to be right here today,” Gray said.  “I thought there was no way a fan base could be as passionate as FAMU, but over these last three weeks, I realize that the Albany State fans are right there.  It might be 1A and 1B,” Gray said with his patented smile.

Quinn Gray went into the history of ASU coaches and named those who preceded him.  He ended the list with former ASU coach Gabe Giardina.  “Gabe did a great job here.  It opened the door for him to move on to another position, but that brought the opportunity for me to be here,” Gray said.

In his address, he talked about former greats and welcomed them back to the fold.  He said he wanted to engage other former players and that they were always welcome because he respected the history of ASU football and those that laid the groundwork for the successes the Golden Rams have in winning conference and national championships.

He preached unity.  “When I was at my previous job, I realized that those schools have a lot of money.  Pretty much everything we asked for was provided for us coaches and the players.  I came from the HBCU realm where we had to earn everything we got.  I want to ensure that my players attack the classroom just like we attack on the field. We’re going to start fast in the classroom and if they need help, we’ll make sure we get them that help.  It will be a total effort in making sure these young me are able to be successful on and off the field,” Gray said.

Gray is obviously focused on the hot points that are important to the HBCU family.  Playing four years at FAMU before embarking on his professional career, Gray has been in the culture from the player standpoint.  As a coordinator at FAMU and an assistant at Alcorn State, Gray has seen coaching from different angles.  When you add in his experience at the FBS level at a Power Five school, he has all the ingredients to possibly be just what Albany State ordered.  On this day, for the sake of HBCUs, he was what the culture needed.