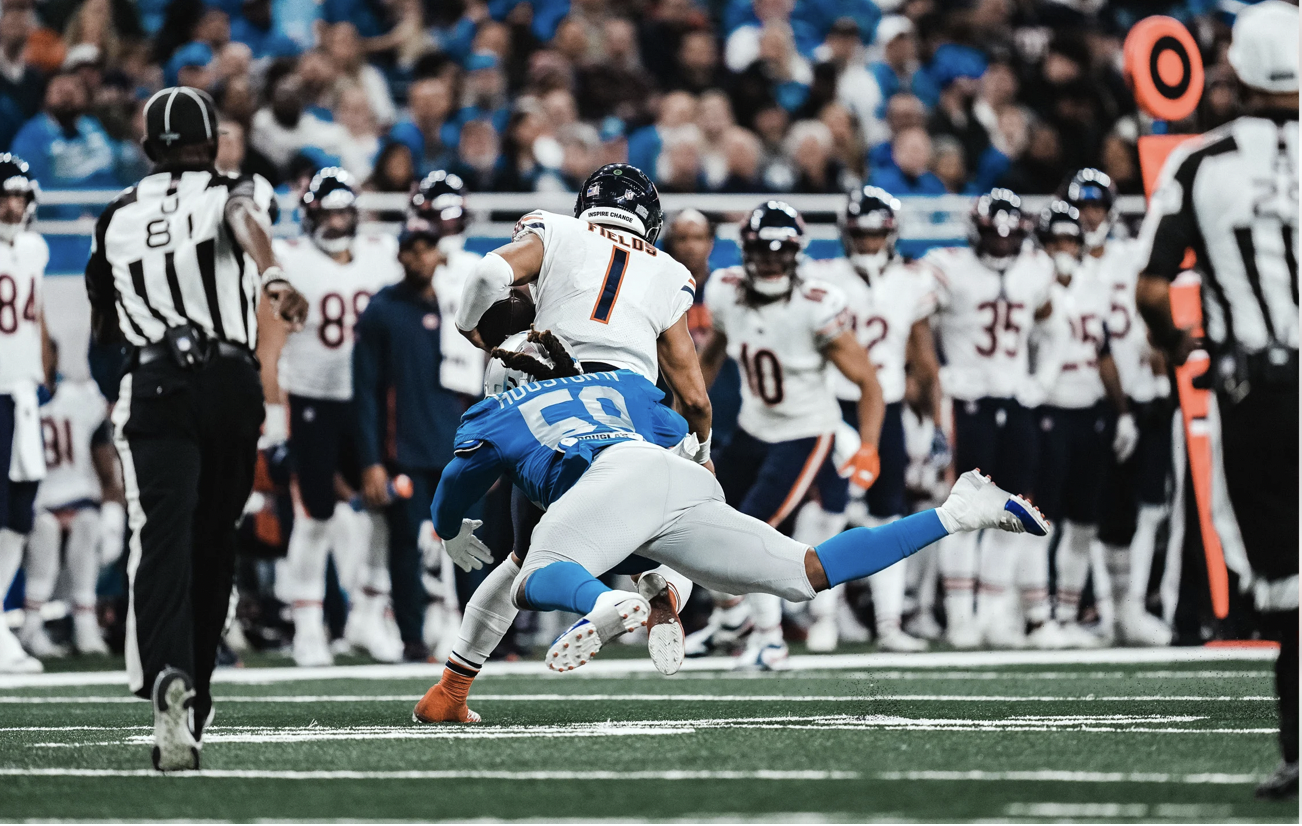 Jackson State product James Houston (#59) takes to the air to twist down Chicago QB Justin Fields Sunday in Detroit’s 41-10 win over the Bears. Houston’s three sacks landed him in the NFL record book.

The 6-1, 241-pound outside linebacker out of Jackson State was taken in the sixth round by the Lions in this year’s draft. He transferred to Jackson State from Florida last season and posted 16.5 sacks for Deion Sanders’ JSU Tigers, tied for second in the FCS..

He has continued to stand out since he played his first NFL game on Nov. 24 vs. Buffalo. It was the Lions’ 11th game of the season but the first for Houston.

Houston languished on the team’s practice squad since the beginning of the season. He had two sacks in his initial game and a sack in every game but one since. His playing time has increased in every game.

On Sunday, he got his first start and played a season-high 33 defensive snaps, 63% of the Lions plays. He validated Lions’ head coach Dan Campbell’s confidence in him with a season-high three sacks of Chicago quarterback Justin Fields.

Houston has been employing what some are calling a “Euro step,” a basketball move where an offensive player takes a long stride in one direction and then takes another in another direction. He has used the quick step and change of direction to get around bigger offensive tackles. See video of his first sack here.

See video here of Houston closing fast to take down Fields for his third sack.

In the second of his trifecta, he sacked and stripped Fields of the ball. See video of that sack here. The sacks were the only tackles Houston made as the Lions improved to 8-8 with the 41-10 win. Detroit is 4-2 in games in which Houston has played.

His eight (8.0) sacks are tied for 27th in the NFL with veterans Montez Sweat of Washington and Dorrance Armstrong of Dallas. He also leads all NFL rookies with the eight takedowns. He is ahead of Detroit’s 2022 first round draftee, rookie right DE Adnan Hutchinson. The Michigan product has 7.5 sacks in 16 games.

The Lions close out the regular season Sunday night (8:20 p.m.) at 8-8 Green Bay. A win by the Lions and loss by Seattle to the host L. A. Rams Sunday gives the Lions an NFL Wild Card playoff berth.

– # 59 JAMES HOUSTON IV, OLB, Detroit (1st season, JACKSON STATE) – In 41-10 win over Chicago, Houston got his first start at outside linebacker and had three total tackles, all sacks for -17 yards. One sack forced a fumble by Bears’ QB Justin Fields. Houston got his first two sacks from his right end position and his third from the left side. He set an NFL record with now eight sacks, the most in the first six games of a player’s career in league history. Houston was in on 33 (63%) of the defensive snaps and three (10%) on special teams’ plays.

– #45 JOE THOMAS, LB, Chicago (5th season, SOUTH CAROLINA STATE) – Thomas started at linebacker in the Bears’ 41-10 loss to Detroit and led the Beats with 12 total tackles, seven solos including a tackle for loss. He also had a special teams’ tackle. He was in on 70 (99%) of the defensive snaps and seven (23%) of the snaps on special teams.

– #97 JAVON HARGRAVE, DT, Philadelphia (7th season, SOUTH CAROLINA STATE) – Starting at defensive tackle in 20-10 loss to New Orleans, Hargrave finished with eight total tackles, four solos including one sack for -5 yard. It was Hargrave’s career-high 11th sack of the season. He was in on 45 (65%) of the defensive snaps and six (23%) of the snaps on special teams.

– #36 DANNY JOHNSON, DB, Washington (5th season, SOUTHERN) – Starting at cornerback in 24-10 loss to Cleveland, Johnson had one assisted tackle. Johnson was in on all 57 (100%) of the defensive snaps.