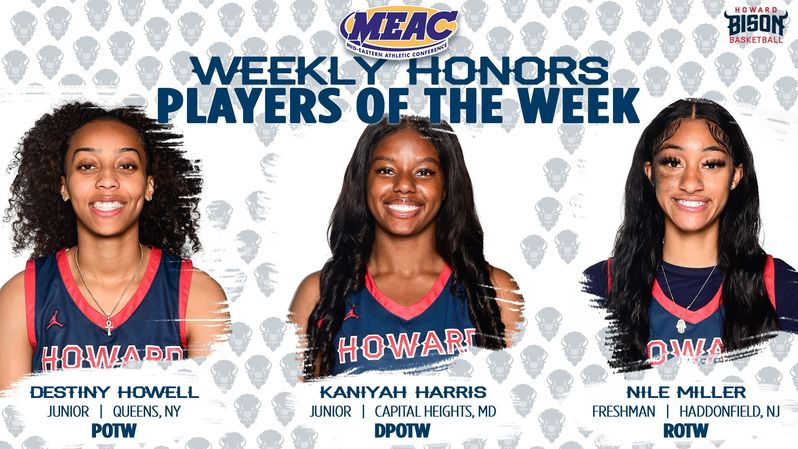 Howard University took home all of the weekly MEAC women’s basketball awards as it preps for conference play.

Howell won her second Player of the Week honor after posting a career-high 35 points in the Bison’s win over VCU. Howell broke her 34-point career high reached earlier this season in November in just 37 minutes. Going 13-for-20 from the floor and hitting nine of her 13 3-point attempts, Howell is the first MEAC player to hit nine 3-pointers in a game since Howard’s Jayla Thornton in 2019. Howell also grabbed three rebounds while dishing out an assist.

First-year Nile Miller grabbed a team- and career-high seven rebounds against VCU while adding four points, a block, and a steal to her stats.

Junior Kaniyah Harris grabbed six rebounds – including five on the defensive end – in Howard’s 79-67 victory over VCU. The Maryland native also posted two blocks and grabbed a steal in the defeat. Harris highlighted the night with a career-high 13 assists, falling one point shy of a double-double.

Howard opens conference play Saturday, January 7th as they host Delaware State at 2 p.m. inside The Burr. Live stats will be available.For more information, visit the Bison Athletics website at www.HUBison.comand/or the MEAC website at www.MEACSports.com.