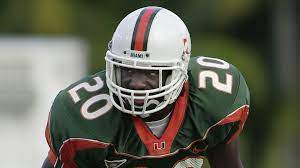 Former Miami star and NFL legend Ed Reed is taking over as head coach at Bethune-Cookman.

Ed Reed looks like he will be the next Hall of Fame defensive back to take over at an HBCU.

The former Baltimore Raven is expected to be named the next head coach at Bethune-Cookman University, according to Brett McMurphy. He will replace Terry Sims, who was dismissed in November after six seasons as the program’s head football coach.

The former University of Miami star recently served as Chief of Staff for the Miami Hurricanes’ football team, and served a short stint as an assistant defensive backs coach with the Buffalo Bills. But he has never coached on the collegiate level.

Then again, neither had Deion Sanders prior to taking the Jackson State head coaching position. Back in April 2021, Sanders said he’d talked to Reed about the possibility of him becoming a head coach at an HBCU.

“Guys like Ray Lewis, I know is tremendously interested. Ed Reed, for certain. Guys that I know that are truly interested and they love the game and they love kids. This could be a phenomenal thing,” Sanders said at the time. “That’s not taking anything away from the coaches that are currently coaching right now, because I’m telling you, it’s some really good coaches, coaching in the SWAC — at HBCU football period.

Reed’s name has appeared in searches for several HBCU openings since then, including Grambling State. Now Reed will get his shot to see if he can turn a SWAC program around like Sanders did at JSU.