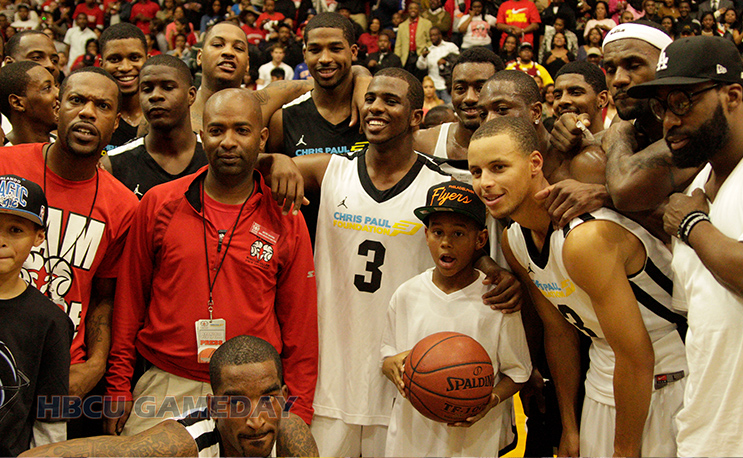 Chris Paul to become an HBCU graduate on Friday

Future hall of fame guard Chris Paul has been a supporter of HBCUs for a long time. Friday he will become a graduate of one.

After years of supporting HBCU causes on and off the court, Chris Paul is finally set to graduate from one.

The 37-year-old has a busy schedule ahead of him as the Suns are due to play the Los Angeles Clippers at Staples Center on Thursday night. He will then hop on a plane and travel over 3,000 miles to receive his bachelor’s degree in communications. Just over 24 hours later the second annual Boost Mobile Chris Paul HBCU Challenge will take place in Las Vegas as four HBCUs — Hampton University, North Carolina A&T, Texas Southern and Norfolk State — will battle it out at the MGM Grand over the weekend.

Paul, a Winston-Salem native, played his college basketball across town at Wake Forest University from 2003 through 2005 before being picked third overall in the NBA Draft that year.

But his roots at WSSU run even deeper, as both his parents attended the university. His late grandfather was also a friend of Hall of Fame head coach Clarence “Big House” Gaines, who used to come watch Paul play at West Forsyth High School in nearby Clemmons, NC.

Paul has spent much of the last decade giving of his time and resources to WSSU and other HBCU causes. He held a charity basketball game at WSSU homecoming in 2012 during the NBA lockout that featured LeBron James, Kevin Durant, Stephen Curry and a host of other all-time NBA greats. He created an internship pipeline at A&T, produced a docuseries highlighting the plight of HBCUs in college athletics and has been a part of two basketball showcases featuring HBCUs for back-to-back years.

“I speak about it every now and then when I get a chance, but I think HBCUs are so important for trying to make sure that we level the playing field,” Paul said last month. “Make sure that they’re provided with the same opportunities that a lot of these other schools are blessed with, and the guys are just as talented, if not more talented, they just need the platform. They need people to see them, to believe in them.”

Friday, Paul will join the fraternity of HBCU alumni a few hundred feet away from where he once played in the ACC. While some are quick to point out that Paul didn’t play his college ball at an HBCU, Paul has given back in ways that few ever do to the school whose letters they once wore on their jersey.

Chris Paul to become an HBCU graduate on Friday