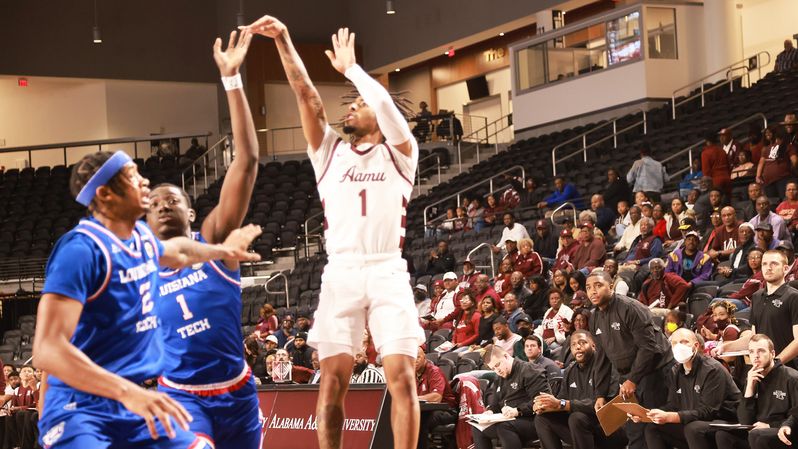 HUNTSVILLE, Ala. – Alabama A&M (1-5, 0-0 SWAC) got an early season challenge as they used a second half rally to stave off the upset bid of NAIA UT-Southern (6-2, 3-0 MSC), scoring the final nine points in a 90-79 victory in an NCAA Division I men’s basketball game on Thursday, November 25.

Junior guard Messiah Thompson (Atlanta, Ga.) rained threes all night, going 6-of-10 from beyond the arc and 9-of-14 from the field on his way to a game-high 26 points along with three rebounds and three steals.

He was joined by graduate guard Brandon Powell(Huntsville, Ala.) with a big man style double-double of 14 points and 11 boards – five offensive – and junior forward Dailin Smith (Colorado Springs, Colo.) dropped 17 points on 6-of-7 shooting from the line to go with six caroms and four steals. Senior guard Garrett Hicks (Madison, Ala.) added 14 points, four boards and a game-high tying five assists to round out the top performers.

A mismatch only if you looked at it from the perspective of an NAIA playing an NCAA Division I program on the road, the Firehawks showed early it was anything but. Down 7-3 after the first 2:38, they would respond with five straight points as part of a 10-2 run that put them up 13-9 by the 14:07 mark.

It would continue to be a back-and-forth affair as a three by Thompson capped a 5-0 burst for a 14-13 A&M lead only to see UTS answer with five straight of their own to pull back ahead 18-14 at the midway point of the half. The Bulldogs would find themselves in a dog fight the entire frame as the clubs then battled four ties and as many lead changes, a stretch that would finally end with UT-Southern holding a 39-37 margin at the break.

The Firehawks opened the second half with another mini 5-0 run, keyed by a triple by Kavion Hancock, to stretch to a 44-37 advantage in the opening minute before Thompson knocked down a jumper and three as part of a tying 7-0 run with 16:49 to play.

From that 44-44 deadlock, the teams would fight through a tie and three lead changes, the last of those coming with Alabama A&M trailing 56-55 at the 11:32mark. That lead change would ignite a 12-0 run led by four different scorers, six from Hicks, that looked like it might have been the knockout punch. That was not to be the case as UT-Southern came right back with a 15-6 run over the next 5:36, pulling them within 73-71.

Adarion Hudson would make it an 18-6 streak as he nailed the go-ahead three-pointer at the 4:38 mark only to see that matched by Hicks to flip the script and make it 76-74. It would be one haymaker after another as Tad Sivley drilled a triple to take back the lead just outside of four minutes but Thompson and Hicks answered with a jumper and long ball for an 81-77 lead with 3:07 to play.

Sivley would get the Firehawks back within two with a fastbreak jumper at the 2:20 mark but it would the last time their side of the scoreboard would change. That final two minutes-plus would belong to Alabama A&M as it rattled off the final nine points, five by Thompson, to escape with the 90-79 victory, a margin that was not indicative of the type of game it actually was.

It would be Sivley leading UTS with 19 points on 8-of-11 shooting to go with five boards while Hancock dropped 18 with a 4-of-8 performance beyond the arc along with four assists. Kendall Wright added 14 points, three caroms and three assists and Brady Brown hauled in 10 boards with six points and three assists. Hudson capped off the top performers with eight points and a game-high tying five assists along with a pair of steals.

The Bulldogs don’t take too much time away from the court as they are right back in action on Monday, November 28 when they host former National Basketball Association (NBA) star Kenny Anderson’s Fisk program. Game time is set for 7 p.m. at the Event Center.