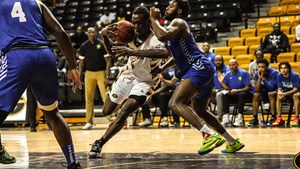 Grambling State got back on the winning track on Friday, handling business against University of Texas — San Antonio.

SAN ANTONIO, Texas | Carte’are Gordon shot nearly 64 percent from the floor and finished with a team-high 18 points, while Cameron Christon tossed in 13 points as the Grambling State University men’s basketball team snapped a two-game losing streak by opening the 210 San Antonio Shootout with a 75-55 rout of UT-San Antonio on Friday night at the Convocation Center.

Gordon went 7-of-11 from the floor to finish with 18 points and a team-high nine rebounds. Christon added 13 points, shooting 60 percent (3-for-5) from beyond the three-point line to pace the Grambling State offense. Both Shawndarius Cowart and Quintin Murrell each added eight points.

Grambling State (3-2) quickly jumped out to a 9-2 lead on baskets by Christon, Cowart, Tra’Michael Moton and a monster dunk by Gordon with just over 15 minutes to play in the opening half.

The Tigers, who shot 43.8 percent from the floor in the first half, stretched the advantage to 16-4 just eight minutes into the game as Malik Lamin drained a jumper and Virshon Cotton sank a 3-pointer.

GSU, which held UTSA to just two field goals for nearly the first 12 minutes of the game, continued its strong start by extending the lead to 23-4 with 8:55remaining.

While the Roadrunners continued to search for back-to-back buckets in the opening half, Grambling State continued to push the margin, stretching the lead to 28-7 on a layup by Moton and 3-pointer by Christon with just over six minutes to play.

A jumper by Jonathan Aku, along with a trey by Quintin Murrell, gave the Tigers a commanding 33-9 lead with just over four minutes left in the first half.

It took nearly 17 minutes for UTSA to hit back-to-back field goals as Japhet Media scored two straight layups as the Roadrunners closed the gap to 33-15, but an Aku layup with 2:27 ended the streak as the Tigers led 35-15.

UTSA, which shot 25.9 percent from the field in the first half, used a 10-2 run over the final 4:23 as Grambling State went cold from the floor as the Roadrunners closed the deficit to 35-19 at the half.

The Tigers started the second half strong, pushing the lead back to 20 points, 40-20, after a Gordon jumper just one minute into the period.

A Christon 3-pointer, followed by a Gordon dunk, gave Grambling State a 47-25 advantage with 16:18left.

The Tigers extended the lead to 66-40 with 5:24remaining at the Roadrunners (4-2) could not recover as Grambling State snapped its two-game losing streak.

UP NEXT
Grambling State continues play in the 210 San Antonio Shootout on Sunday against Incarnate Word. Tip-off against the Cardinals is set for 5 p.m.at the Convocation Center.