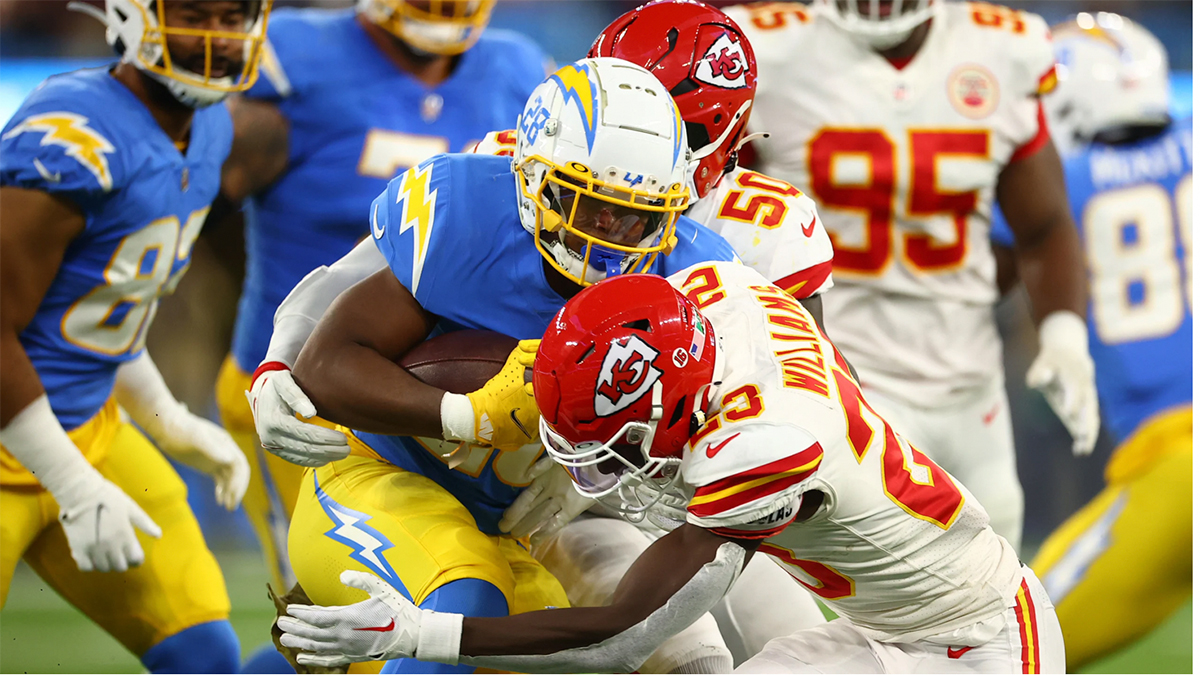 Rookie defensive back Joshua Williams (#23) out of Fayetteville State continues to make plays for the 8-2 Kansas Chiefs. According to Chiefs watchers, his future is bright.

Kansas City rookie Joshua Williams is again at the forefront of this week’s HBCU NFL Report.

The defensive back out of Fayetteville State continues to play significant minutes and make significant contributions for the 8-2 Chiefs.

In Sunday night’s 30-27 last-minute Kansas City win over the Los Angeles Chargers, Williams didn’t start but played starters’ minutes. He was in on 43 snaps on defense, 66 percent of the Chiefs’ plays. He also logged 14 plays on special teams, 48 percent of those snaps.

As the rookie was targeted often, he was third on the team with six total tackles. Four of them were solos.

This is what was said about the rookie’s play against the Chargers on Fansided’s arrowheadaddict.com:

So far this season, the 6-3, 193-pound corner taken in the fourth round (135th overall) has 18 solo tackles and one interception.

The leading HBCU products on defense this season have been Javon Hargrave of Philadelphia and Grover Stewart of Indianapolis.

Both have been very productive. The extra attention given to them may be the reason their stats were down this week when their teams met.

Hargrave, the seventh-year veteran defensive tackle out of SC State, had just one assisted tackle and one hit on the quarterback in the Eagles’ 17-16 come-from-behind win.

Stewart, the anchor of the Colts’ defensive line in his eighth season out of Albany State, had one solo tackle and a fumble recovery. Stewart was last season’s Black College Player of the Year presented by the NFL Players Association.

For the season, Hargrave has 40 total tackles, 19 solos and 21 assists. He had a season-high 13 tackles in the Eagles’ only loss of the season, 32-21 to Washington two weeks ago. His total of 7.0 sacks is tied for 15th in the league but is third among defensive tackles to Kansas City’s Chris Jones (9.0) and the New York Jets’ Quentin Williams (8.0). Hargrave has one forced fumble and two recoveries.

HBCU NFL Players of the Week

– #23 JOSHUA WILLIAMS, DB, Kansas City (1st season, FAYETTEVILLE STATE) – Was third on the Chiefs with six total tackles, four solos and one special teams’ solo tackle in 30-27 win over the LA Chargers. Williams was busy as he logged 43 (66%) of the defensive plays and 14 (48%) of the special teams’ plays.

– #60 NICK LEVERETT, OL, Tampa Bay (2nd season, NORTH CAROLINA CENTRAL) – Started at left guard in Bucs 21-16 win over Seattle in Munich, Germany. The Bucs’ offensive line anchored 161 rushing yards and one TD and 258 passing yards with two TDs and no sacks. Leverett was in on 75 offensive plays (100%) and five (19%) on special teams.

– #71 TYTUS HOWARD, OT, Houston (4th season, ALABAMA STATE – Howard started at right tackle in 23-10 loss to Washington. Houston rushed for 21 yards and one TD and passed for 169 yards with two picks. The Texans offensive line gave up five sacks. Howard played all 56 (100%) offensive plays and two (7%) of the plays on special teams.

– #33 ANTONIO HAMILTON, DB, Arizona (7th season, SOUTH CAROLINA STATE) – Hamilton started at cornerback in 38-10 loss to San Francisco. Hamilton finished with three total tackles in 58 (100%) of the defensive snaps. He was in on eight (11%) of the plays on special teams.

– #97 JAVON HARGRAVE, DT, Philadelphia (7th season, SOUTH CAROLINA STATE) – Started at defensive tackle in 17-16 win over Indianapolis and finished with one assisted tackle and one hit on the quarterback. Hargrave was in on 47 (72%) of the defensive snaps and six (24%) of the special teams’ snaps.