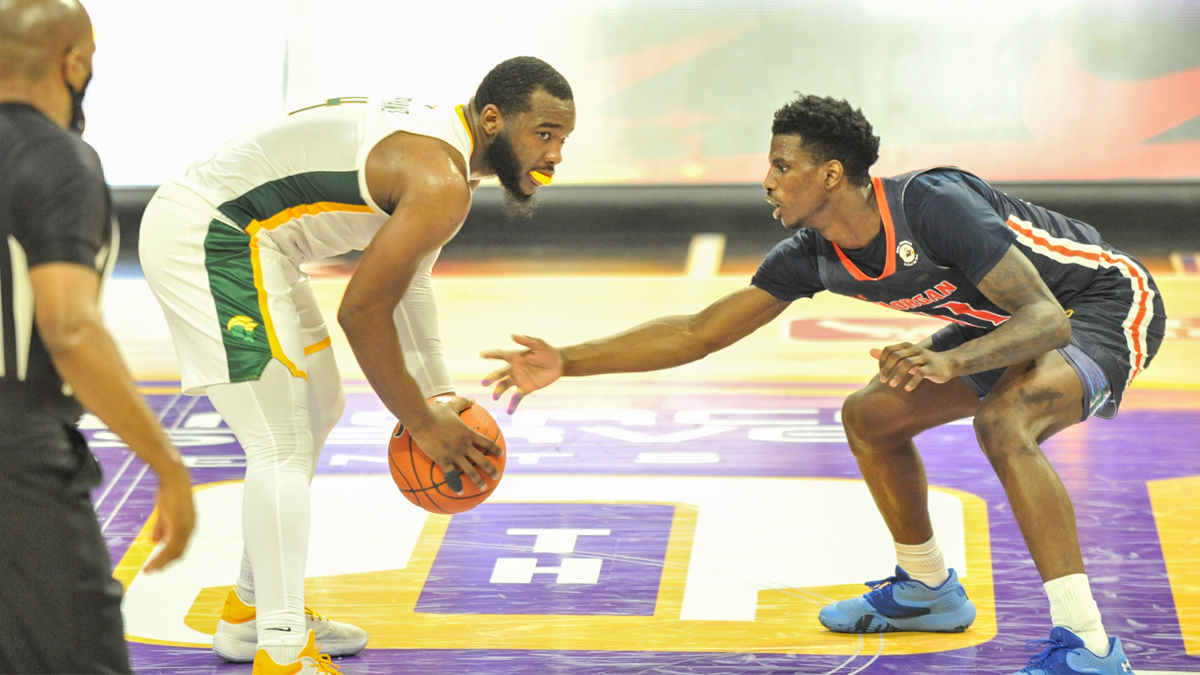 Norfolk State takes down Monmouth on the road

WEST LONG BRANCH, N.J. – Playing its third consecutive game on the road, Norfolk State men’s basketball held off a Monmouth comeback, coming away with a 64-59 victory.

Joe Bryant Jr. led the Spartans with 23 points, his second game of the season scoring 20 or more. He also pulled in a team-high seven rebounds, while Christian Ings added 13 points and three assists.

Daryl Anderson knocked down a 3-pointer 12 seconds after the opening tip, getting the game going on the right note for the Spartans. One Kris Bankston dunk and Christian Ings jumper later, the Spartans had a 7-0 advantage.

But that quick start would flip soon after, as the Hawks went on a 18-2 run to get the home crowd rocking. Consecutive trips to the free throw line by Bryant and Ings helped the Spartans halt the momentum, before Anderson’s dunk gave the lead back to NSU.

Norfolk State wouldn’t trail again for the rest of the night. Bryant knocked down a pair of 3-pointers in the final two minutes, putting NSU ahead 32-22 at halftime.

An 8-0 run early in the second half got the Hawks within three, but Bankston got NSU back on track with an and-one layup, followed by Cahiem Brown’s 3-pointer from the wing. Bankston ended the day with nine points and five rebounds, while Brown added eight points and five boards.

Monmouth wasn’t done yet, though. Jack Collins hit a pair of threes in a 90-second span, pulling the Hawks within a single point. Back-to-back Ings and Bryant buckets kept the lead up, before the latter knocked down a crucial 3-pointer giving NSU an eight-point cushion with under four minutes to play.

NSU contained Monmouth’s offense effectively, holding the Hawks to 23-of-68 shooting (33.8 percent) for the game. The Spartans shot 7-of-17 from behind the arc on Friday, their most efficient mark of the season.

Norfolk State heads to Atlanta, Ga. On Saturday for a MEAC-SWAC showdown against Alabama A&M. Slated for the evening stretch of the ATL Has Something to Say HBCU Challenge, the Spartans and Bulldogs will tip-off at 6 p.m.

Norfolk State takes down Monmouth on the road