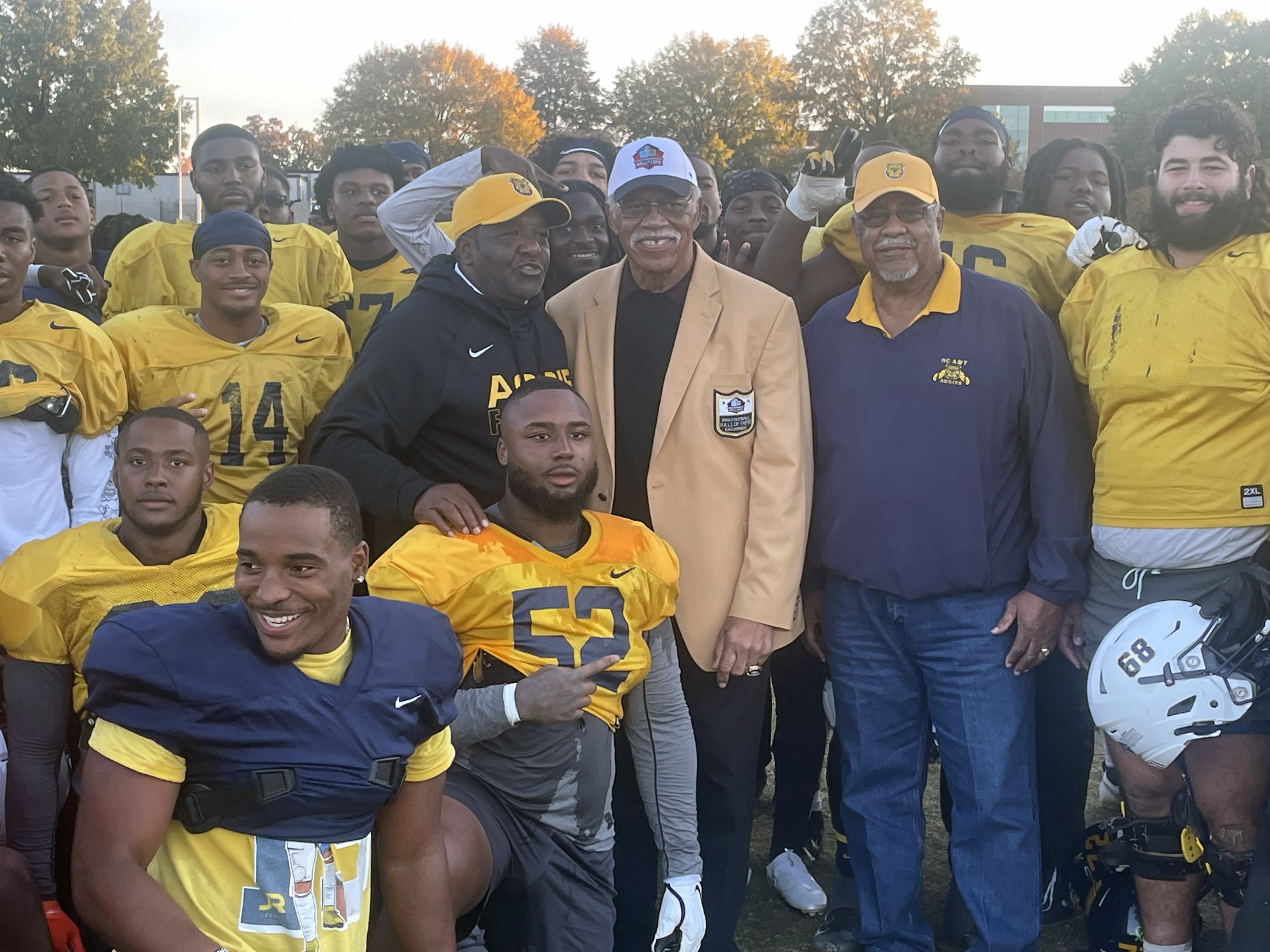 NC A&T alum and Pro Football Hall of Famer Elvin Bethea spoke to the Aggies after practice Thursday. He is just part of the motivation for the Aggies homecoming Saturday vs. Campbell.

Bethea, 76, is among the many Aggie alumni and faithful returning to Greensboro this week for the NC A&T homecoming. Bethea watched the practice and then spoke to the team afterwards.

His inspiring message to the 2022 team as it prepares to play before a sold out packed house of 21,500 at the Aggies’ themed GHOE (Greatest Homecoming on Earth), was to ‘leave it all on the field.”

“This is your opportunity to do something special,” Bethea, decked out in his Hall of Fame gold jacket and sporting his Hall of Fame ring, told the team. “This is the chance to show everyone what you’re made of, that you’re an Aggie.”

The condition the Aggies are in

Heeding Bethea’s words will be key for A&T (4-3, 2-0 Big South) as they face a tough opponent in Campbell. The Camels have an identical 4-3 overall record and are tied at 2-0 with A&T and Gardner-Webb atop the six-team Big South standings.

After dropping its first three games to open the season, A&T is now on a four-game winning streak. In the Aggies most recent win, a 38-14 road victory over Big South member Robert Morris last week, they got off to a hot start. Redshirt senior quarterback Jalen Fowler completed 19 of 30 passes for 297 yards and a career-high four touchdowns.

“Physically, we’re okay,” Washington said after Thursday’s practice. “We’ve got some people banged up but that’s expected this time of the season. But mentally and psychologically, I think we’re in a very good place. I’m looking forward to Saturday.”

Campbell head coach Mike Minter said in a story this week that the Aggies’ offense runs through talented sophomore running back Bhayshul Tuten, the Big South’s rushing leader. Minter said if you stop Tuten, you stop the A&T offense.

Tuten leads the Big South rushing stats with 776 yards in seven games. He has rushed for over 100 yards in six straight games. At 110.9 rushing yards per game, Tuten is tenth in the FCS and 54 yards per game higher than the Big South’s No. 2 rusher, J. D. Moore of Charleston Southern (56.0 ypg.).

“There may be some truth to that,” a chuckling Washington said of Minter’s statement about Tuten and the Aggie offense. “Like everything runs through his quarterback (Campbell QB Hajj-Malik Williams). If you stop him you stop them. So, there’s some truth to that. The key is can they stop him (Tuten) and can we stop him (Williams)?

“We do have a couple of other weapons,” Washington said.

Washington also was aware that Hajj-Malik Williams at one time wanted to play for the Aggies.

Former Aggie linebacker Antoine Wilder, who played for the Aggies from 2017 to 2019, went to high school with Williams in the Atlanta area. Wilder said this week on the Aggie fans’ BlueDeathValley.com podcast that Williams contacted him back in 2018 or 2019 about transferring from Army to A&T. Wilder said he put Williams in touch with A&T coaches. The coaches told Williams the Aggies were not interested. Williams reportedly took that as a slight.

“I believe that to be true,” Washington said. “I’ve partially heard the story, told in somewhat of a different way. At that time we had three scholarship quarterbacks. So, it just didn’t work out.

“He does have a chip on his shoulder,” Washington said of Williams.

Williams is currently third in Big South passing stats. He has thrown for 1,526 yards and nine touchdowns with five interceptions. He is completing 62.6% of his passes. Williams is also sixth in the conference in rushing with 275 yards on 73 carries and five rushing TDs.

“I’m looking forward to competing against him because he’s different,” Washington said. “He’s exciting to watch. So it’s going to be very exciting trying to defend him.”

Bethea played for legendary A&T head coach Bert Piggott from 1964 to 1967 when the Aggies were in the CIAA. He was a three-time Pittsburgh Courier Black College All-American playing offensive guard and tackle. The Houston Oilers drafted Bethea in the third round of the 1968 draft as an offense guard. He converted to defensive end.

His draft came two years after the NFL and AFL agreed to merge. It would be four years later, in 1970, before the league’s merged and formed one league with two conferences.

Bethea came out in the same draft with two HBCU first rounders from Tennessee State – defensive lineman Claude Humphrey, a fellow future Hall of Famer taken third overall by Atlanta, and quarterback Eldridge Dickey who went to Oakland with the 25th first round pick.

Bethea was an outstanding defensive end and became one of the most feared defenders for the Oilers from 1968 to 1983. He is credited with 105 career sacks before sacks was an official category. The number is among the top 50 all time and just one of 60 pass rushers to top 100 sacks.