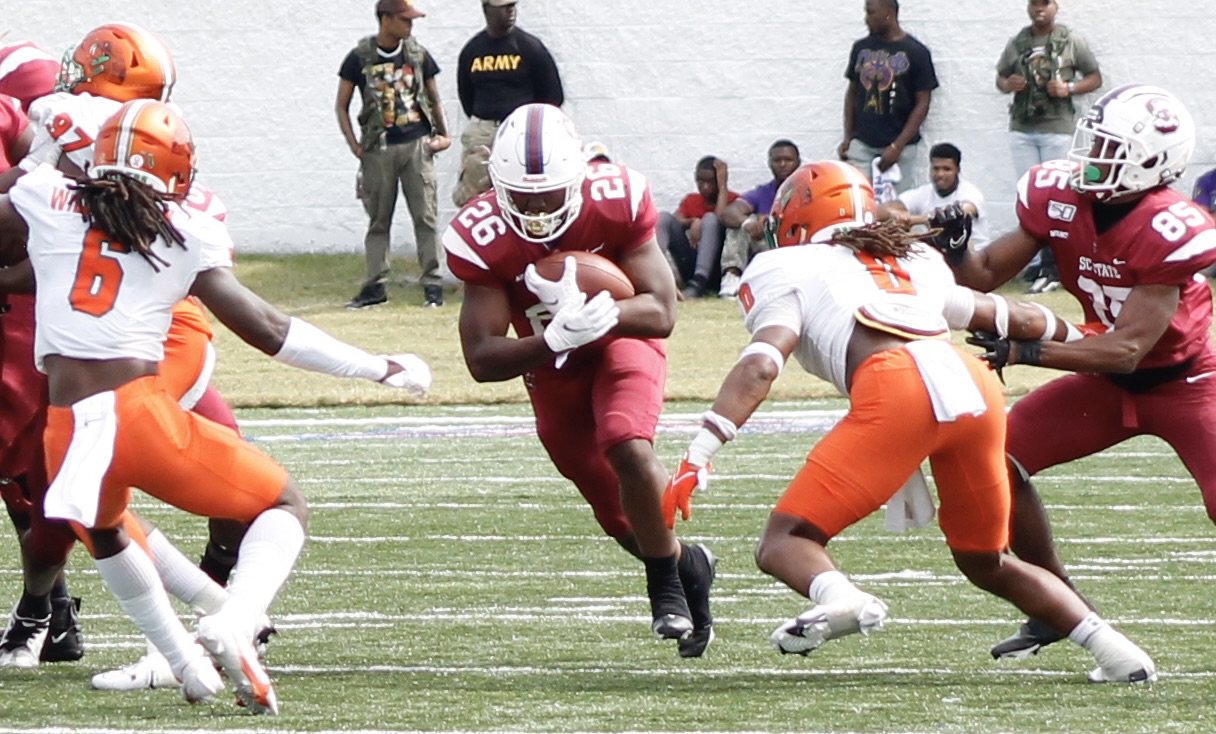 ORANGEBURG, S.C. — There was no running game, and if the passes weren’t sailing wide, they were too high or too short. After three quarters, SC State was mired in its own offensive inefficiency, and Florida A&M was only adding to the misery by building a big lead.

Yet, the Bulldogs (1-4) had some fight left for the fourth quarter, and the fans who left the home opener at Oliver J. Dawson Stadium missed the comeback which fell just short, giving the Rattlers a 20-14 victory and their first road win this season.

“I thought that our guys just kind of hung in there and eventually got to the point where we have a chance to win the football game,” SC State Coach Buddy Pough said. “And you know, it’s sad in the fact that you get that close after having been that far out of it, and then can’t finish it off.”

Pough’s team appeared tp have been finished early. The Rattlers (4-2) needed just one play on their second possession to take a 7-0 lead when quarterback Jeremy Moussa found wide receiver Xaviet Smith wide open in the SC State secondary for a 63-year pass-and-run at 12:13 in the first quarter.

Florida A&M expanded its lead at the start of the second quarter, and the way they did it bore a resemblance to the first score. Moussa found Jah’Ma Sheread on a 35-yard pass play with 12:35 left in the half.

But it was the SC State defense that prevented a runaway despite the two scores to open the first two quarters. After surrendering 228 yards passing in the first half, the Bulldogs limited Florida A&M to 38 yards passing in the final two quarters. The ground game never got going for the Rattlers, either, as they gained only 54 yards on 30 carries.

“I thought it was a tremendous effort on their part to get us back in the football game because if not for them, I’m telling you, we definitely would not have been in there,” Pough said. “So they did their part.”

SC State’s offense was a different story. It only ran for 24 yards on 20 carries, and Core Fields Jr. completed just 17 of 48 passes with three interceptions. But two of those completions provided a late spark and a glimmer of hope.

Down 20-0 with just under 11 minutes to play, Fields found Shaquan Davis in the corner of the end zone to avoid SC State’s first shutout in four years. B.J. Davis intercepted a Moussa pass at the Florida A&M 44, and the Bulldogs converted the mistake into Fields’ second scoring pass to Davis and what would turn out to be the final score.

After a Florida A&M three-and-out, SC State had its last chance for the winning score. But the momentum died despite the last of the Rattlers’ 15 penalties. Passes to Davis and Hezekiah Massey fell incomplete, turning the ball over on downs and killing the vibe.

Pough noted two problems with his offense: the inability to run and Fields, who is listed at 6 feet tall, having to overcome obstacles, including inconsistency and tall defensive linemen

“We can’t run the football, so people have given us tougher defensive looks, so we don’t get some of the available kinds of passing lanes that we had,” Pough said. “And they’re batting a lot of balls and that’s gotten to be the big thing. So there are several instances where we have stuff available to us and we can’t find the throwing lanes because he’s a shorter guy. And it’s a little bit tough sometimes trying to find a direct route from his hand to the hand of the guy that he’s throwing to.”

Florida A&M won its fourth straight game over SC State with a performance that left an impression on coach Willie Simmons.

“Big time win, a lot of adversity, but the guys found a way,” Simmons said. “It’s the mark of a championship ball club. These guys showed character tonight, they showed grit, and they showed resilience in the face of all kinds of adversity. I don’t know the official stats, but a whole lot of penalties on our end to not very many on their end, but our guys found a way to get it done, and that’s what it’s all about.”