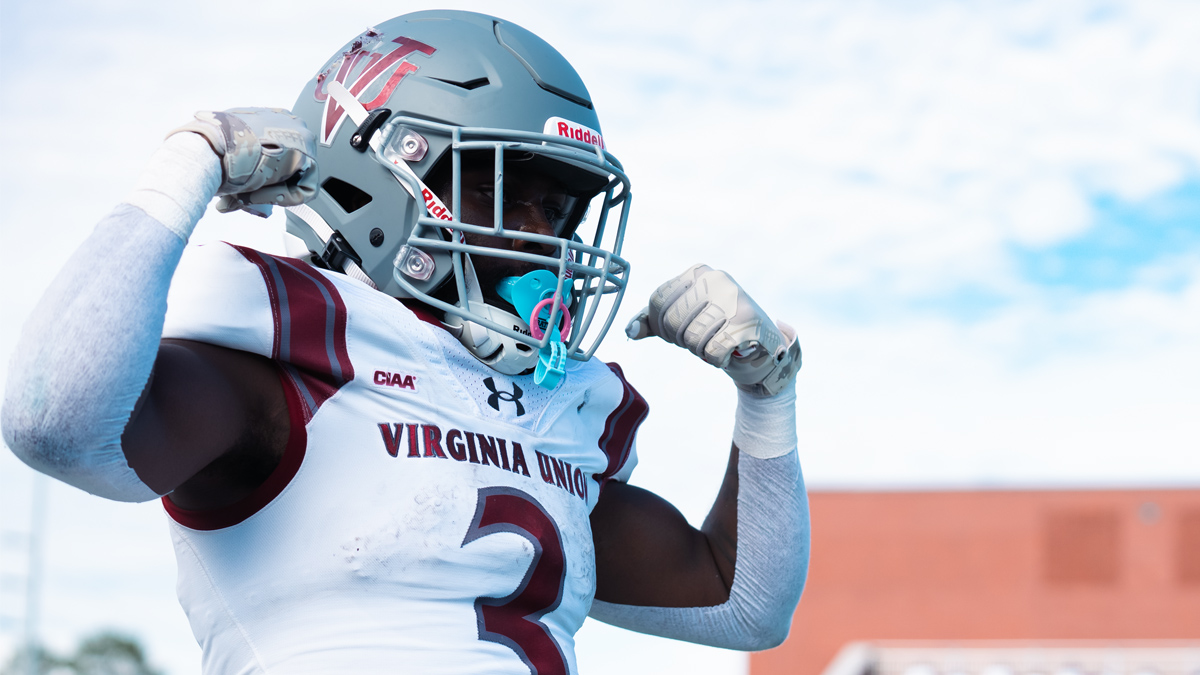 Jada Byers: The best college back you never heard of

Virginia Union running back Jada Byers is on pace for a historic season as his team remains undefeated.

It’s fitting that Jada Byers got the call to come to Virginia Union while at a bowling alley. The diminutive running back from New Jersey has run through defenses like a bowling ball so far in his young career in the CIAA.

Through five games this season, Byers has rushed for 891 yards, averaging 194 yards per game, and 11 rushing touchdowns. Both numbers lead Division II nationally. Those are awesome numbers — but even those numbers don’t tell the entire story. He ran for a CIAA record 319 yards in Week Two as Virginia Union took down Valdosta State, ranked as the second-best team in Division II football heading into that week. Just a reminder — the CIAA has been playing football for 110 years.

Byers entered the fifth week of the season with more total touchdowns — 11 — than half of the CIAA.

He’s done all of this in a compact 5’7, 180-pound package that is both shifty and also surprisingly hard to bring down. Just ask Fayetteville State.

Byers ran for 161 yards — his second-lowest output of the year rushing to that point — but every one of them staggered the defense. FSU led 14-0 midway through the first quarter on the nationally ranked VUU squad. But Byers put on his cape and by the end of the quarter he had added two more touchdown runs to his total to tie the game. After largely holding him in check over the next two quarters, Byers exploded in the fourth quarter on a critical drive.

VUU got the ball with nine minutes remaining, nursing a 24-21 lead over FSU. Byers, getting the ball backed up against his 11 yard line, broke off a 27 yard run to give his team some breathing room. He followed that up with a four-yard plunge, and with the aid of a personal foul, VUU was in FSU territory. Byers got the ball again, breaking off a 42 yard run, running past, around and through defenders to bring his team to the goal line. He then finished the drive with the score that would ultimately give his team the breathing room it needed in a 31-27 win on the road.

After the game, Byers shook hands with the opposing team and fielded questions for the media, all the while holding a towel. But this was no ordinary towel.

“My motivation is right here,” Byers said smiling proudly while holding up the towel, with photos of two young children. “I got two kids at home.”

How Jada Byers got to Virginia Union

Jada Byers’ road to Richmond, VA was a winding one.

Byers was a highly-accomplished high school star at St. Joe-Hammond High School, accounting for 6,309 yards total offense, including 4,950 rushing. He scored 74 touchdowns carrying the ball and a total of 102, a New Jersey record. He was The Press of Atlantic City Player of the Year as a senior in high school.  Despite his accolades, Byers was doubted by college scouts due to his size. He was rated as a two-star back out of high school, he committed to Sacred Heart, the only D1 program to offer him a scholarship.

“This season was to show everybody I’m still the No. 1 player in the state of New Jersey,” Byers said after committing back in 2019. “I always hold that chip on my shoulder (from the doubters).”

Things didn’t work out at Sacred Heart. Add to that the fact that Byers found out he was due to become a father, and Byers says he was determined not to become a statistic.

“Because from Jersey, that’s the only thing they’re going to say about you,” Byers told Richmond.com. “‘Oh, he was another should’ve, could’ve, would’ve.’ That’s one thing I tell myself, I never want to be one of them. At the time, during that process, that’s when I was having my daughter [Azerlyn], at the same time.”

Byers planned to continue his football career at Nassau Hills Junior College when he got a call that changed it all.

Down in Richmond, the 2021 season was approaching and head coach Dr. Alvin Parker was in need of a running back. His star tailback Tabyus Taylor, had hit the transfer portal after VUU and the CIAA decided to sit out the 2020 season. Parker had tried to get Byers to come to VUU straight out of high school, but like many many athletes, he had his heart set on playing Division I.

Quan Johnson is one of Parker’s best friends, who also happened to have been an all-star coach for Byers during his high school days. Parker says Johnson consistently talked about how good of a back Byers was and suggested he reach out to him. So he called him at the bowling alley, and Byers was headed for Virginia Union.

The impact in Richmond was immediate. He led all CIAA rookies with 910 rushing yards, averaging 5.4 yards per carry, en route to being named the conference’s freshman of the year in 2021.

“I feel like I’m home, to be honest because I’m the type of person I am,” Byers told HBCU Gameday. “I’m always up high, regardless of my lowest days. I’m always going to bring a smile to everybody else and try to be my best me. And I feel as though…I’m like, in New Jersey because everywhere I go, everybody knows me. I know everybody.”

‘We love that guy’

There are two things Byers will mention in his interviews besides himself — it is his children and his offensive line.

“I tell everybody every time I have an interview, God wrote my book and I’m just living the actions through it,” Byers said. “And that front five that I have was just amazing.”

“I think any back they get back there can give you something, and put up some numbers behind those guys. But Jada does add a little bit more to the mix when he gets in,” Parker admitted in his press conference after the FSU game.

The offensive line relies on a mix of veterans and up-and-comers to open up lanes for Byers and other backs.

“Brian Gibson is our right tackle, he’s playing extremely well. Justin Means, our right guard, he’s playing really well. We have an all-conference center, Mark Lawton. Our left guard, Larry Jones is playing good. The new guy to the group is Darian Bryant, but those guys are playing extremely well. I’m happy about the way they’re playing and I really like the tenacity that those guys have.”

“We love that guy,” Jones said after the FSU game. “We don’t mind putting our all blocking for him. He’s real humble. He’s just gifted. It’s great blocking for somebody that’s gifted like that.”

Jada Byers enters Saturday’s homecoming game with 1,000 yards well within reach with at least four more contests remaining, plus the postseason looks like a solid possibility. He says his goal coming into the season was 2,000 yards and 20 touchdowns. He’s a little behind pace on the yardage but his touchdown total is well within reach, but he acknowledges whatever he accomplishes will be a team effort.

“I said, look, It’s going to come down, to y’all,” Byers said. “I’m going to just do what I got to do. Y’all are going to do what y’all gotta do and we’re going to make it happen.”

Jada Byers: The best college back you never heard of