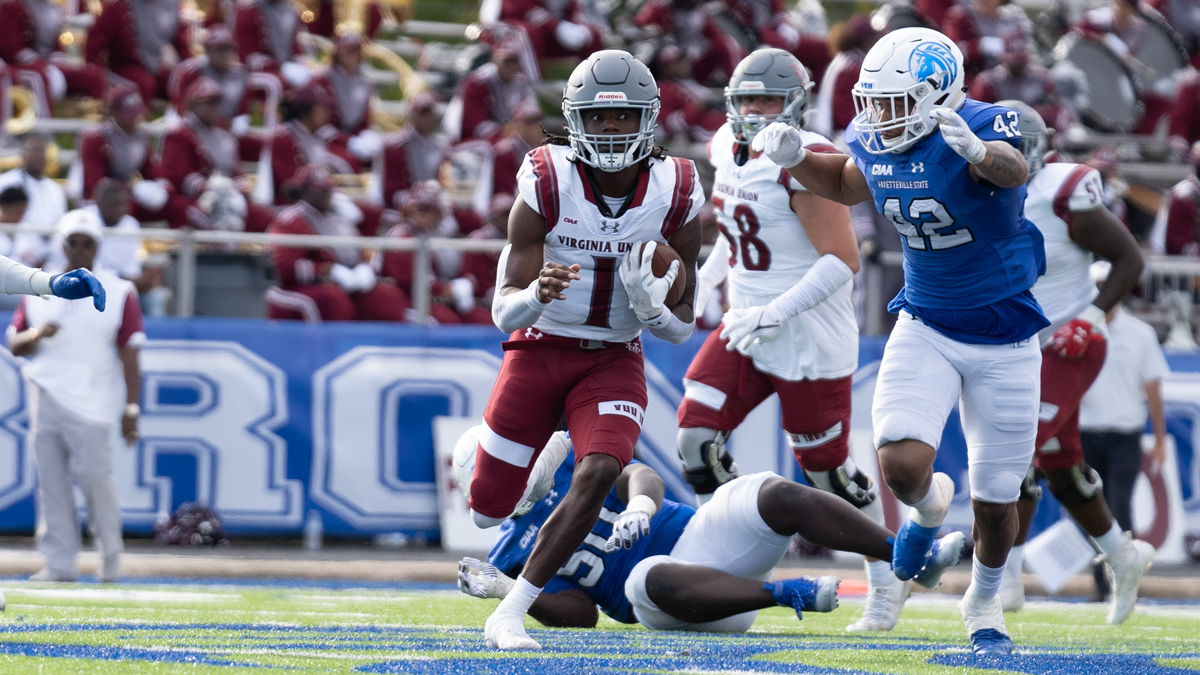 Virginia Union is unbeaten and looks unstoppable midway through the season, but the CIAA North is far from secured.

The middle point of the CIAA football regular season is a good time for reflection.  After all, the conference has worked through its non-conference schedule, followed by cross-divisional play.  Divisional games are a gauntlet, partially because of injury, combined with spirited rivalries and familiarity.  But before this week’s divisional games begin, here are some highlights from the first half of this season:

Right now, the face of CIAA football is Virginia Union (3-0 CIAA, 5-0 Overall, #12 AFCA, #19 D2football.com), which has supplanted Bowie State in that role. VUU seems to be the conference’s most complete team, and is in some elite company when compared to recent history.  The Panthers lead the country in scoring offense at 52.8 points a game. The last time a CIAA school did this was Bowie State in 2017. That version of BSU ended up being a playoff team. It’s hard to talk about VUU without talking about running back Jada Byers. Byers is a legit Harlon Hill candidate, as he leads the country in major categories such as rushing yards (891 yards), all-purpose yards (1056 yards), and touchdowns (13). The last two individuals from the conference to lead in all-purpose yards? VUU’s own Tabyus Taylor in 2019 and Virginia State’s Trenton Cannon in 2017. The rushing yards pace are also ahead of former Bowie State running back Calil Wilkins pace, and Wilkins was a Harlon Hill finalist last year. But the Panthers are more than just Byers. The offensive line continues to be rock solid and tenured. VUU is only allowing 15 points a game, and 275 yards a game. The defense leads the conference in sacking opposing quarterbacks 21 times, led by defensive lineman Armonii Burden. The Panthers have also been above average on special teams, as wide receiver John Jiles leads the country with five blocked kicks, while the rest of the team has three of their own.

It’s hard to see anyone other than the Panthers representing the CIAA North in the championship game, but there are two contenders to knock them off.

Virginia State (3-0, 4-1) has been quietly working in the shadows of their rival just north of them, and the Trojans have found their own groove by winning four straight, including a 28-24 thriller over Shaw last week.  While first year VSU coach Dr. Henry Frazier III started the season with transfer Jabari Blake at quarterback, it has been holdover Jordan Davis who has assumed the helm in directing the offense. VSU has not disappointed in the rushing game, headlined by Darius Hagans, who is 13th in the country in rushing yards with 565 yards.  The Trojans’ strength has been their defense, which has strong performers at each level, including DL Miqueal Pillow-Smiley (2.5 sacks), linebackers Tyrone Fisher (25 tackles) and Zion Johnson (34 tackles), safety Kymon Pope (34 tackles, 5.5 tackles for loss, two interceptions) and defensive back Willie Drew (four interceptions). The Trojans’ defense is second in the country in turnover margin at +11.

Bowie State (2-1, 3-2) started the season with a big out of conference win over a ranked New Haven, but a surprising slip at Shaw has relegated BSU to playing catchup in the CIAA North race. BSU has found its heir apparent at quarterback with Dion Golatt Jr, who is 11th in country with 1,384 passing yards to pair with 10 touchdowns and six interceptions. Golatt surpassed Amir Hall’s single game passing yards record last week against Livingstone when he passed for 439 yards.  The Bulldogs’ defense remains as advertised, only surrendering 243 yards a game.  Their Achilles heel remains untimely turnovers, as it has routinely killed promising drives in high profile games. Additionally, the Bulldogs are heavy offenders of drawing the yellow flag, as they are the conference’s worst in penalties at 101 yards a game.

Perhaps the biggest surprise of the CIAA football season so far is Lincoln (1-1, 2-2). The Lions have won more than one game in a season since 2015, and notched its first conference road win since 2009.  Along the way, the Lions seem to have found some stability at quarterback that had been lacking for several years in true freshman Isaiah Freeman (677 yards, six touchdowns, no interceptions).  Freeman is also the team’s leading rusher. The return of wide receiver Dah’mear Tripplett (16 receptions, 261 yards, four touchdowns) has helped, as he has emerged as Freeman’s top target. Still, the offense has much to improve upon going into division play, particularly in sustaining drives, as they convert only 25 percent of third down plays. The defense is much improved from prior years, and now gives up less yards than the offense (317 yards on offense, 300 on defense).  Opponents aren’t finding as much success passing the ball against the secondary – the Lions have four interceptions so far this season.

Elizabeth City State (1-2, 1-4) and Chowan (2-1, 2-3) have been rather unremarkable so far this season. ECSU has significantly struggled on offense, and is near the bottom of the country in several statistical categories, including converting only 21 percent of third down conversions, generating only 211 yards of total offense, and sporting the worst turnover margin in the conference (minus nine).  The offense isn’t the absolute worse in the conference, which is why it has a win.  Still, the result is emblematic of a team with a lot of new pieces that haven’t yet gelled.  Chowan had notable turnover as well coming into the season, but is ahead of schedule in their development with freshman quarterback Caleb Pierce looking like a long-term solution at the position.  The Hawks are another team who has excelled at defense, as that side of the ball has eight interceptions this season, 14 sacks, and linebacker Montre Moore has 8.5 tackles for loss.