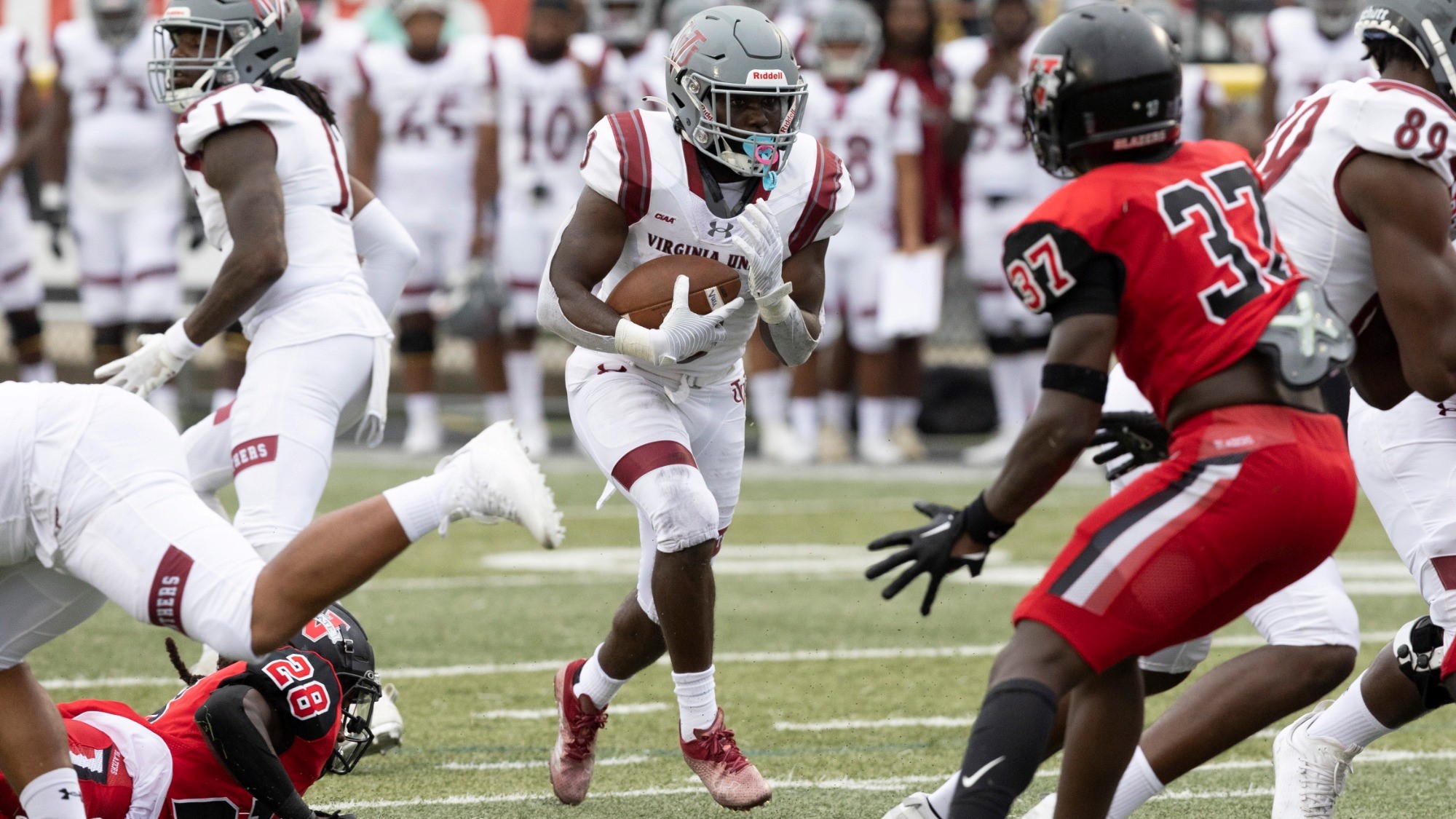 After rushing for 313 yards and three TDs in last week’s 45-40 stunner over nationally-ranked Valdosta State, Virginia Union RB Jada Byers (above) was voted the national player of the week by D2football.com. VUU, one of eight HBCU programs who enter this week at 2-0, hosts Livingstone Saturday.

It’s only Week Three of the 2022 football season and there are just eight undefeated (2-0) HBCU teams left.

There is one in the CIAA and one in the MEAC. There are two in the SIAC, SWAC and the non-HBCU conferences.

Let’s see what the eight have next and what everyone else is facing this week.

The lone 2-0 team in the CIAA is Virginia Union. The Panthers and head coach Dr. Alvin Parker, behind a school-record 313 rushing yards and three touchdowns from sophomore running back Jada Byers, are coming off a big 45-40 upset win at NCAA Div. II No. 3 Valdosta State Saturday.

The loss was the first at home for Valdosta State since 2017. The Blazers were last year’s runners-up in the Div. II championship game (to Ferris State).

“Our guys were focused the entire trip,” said VUU Head Football Coach Dr. Alvin Parker on vuusports.com. “Any time you take your program 10 hours away from home focus is definitely required. The coaches did an amazing job of putting together a solid game plan and the players did an amazing job of carrying it out. I was also happy to see so many VUU fans in attendance all the way in Georgia. I’m proud of this group, and after a long trip back home our job now turns to preparing for Livingstone College.”

“The Division II make-up, you know bus rides are a part of that,” Parker said during an interview on D2football.com. “It’s almost like the minor league baseball system. You gotta pack it in and go. We didn’t shy away from that. They came up to us last year and they took a bus. So, we just kind of returned the favor and went down the same way.”

For his efforts, Byers was named national NCAA Div. II player of the week by D2football.com.

D2football.com rates the Panthers 23rd in its national poll this week, just ahead of three-time CIAA champion Bowie State. This marks the first time a VUU football team has been ranked in the nation’s Top 25 ranking since 2019. The Panthers did not break into the AFCA Div. II Coaches Poll Top 25 this week.

BSU fell from 11th to 24th in the D2football poll after its 40-12 loss to Saginaw Valley State Saturday.

Head coach Trei Oliver has his North Carolina Central team out of the MEAC at 2-0 after wins over former rivals NC A&T and Winston-Salem State. The Eagles will be traveling to face another 2-0 team, New Hampshire of the CAA, on Saturday (6 p.m., ESPN+).

SC State and Delaware State are off this week.

Jackson State and Arkansas-Pine Bluff of the SWAC are both 2-0.

JSU and head coach Deion “Coach Prime Sanders have their first home game Saturday (1 p.m., ESPN3) vs. Grambling State (1-1). Sanders said the game will go on despite the water crisis in Jackson, Ms. “Everybody bring a bottle of water,” Sanders said Monday on the SWAC Coaches Media Teleconference.

Grambling got big games from quarterback Quaterius Hawkins (293 passing yards, 3 TDs) and running back Maurice Washington (95 rushing yards, 2 TDs of 61 and 25 yards) in getting its first win Saturday 47-21 over Northwestern (La.) State. It was also the first win for new head coach Hue Jackson

Southern (1-1) meets 0-2 Texas Southern in Arlington, Texas in a SWAC West Division game to be carried live on HBCUGo. Texas Southern got its first win against Southern in over a decade last season, 35-31. It was one of three TSU wins on the season.

Fort Valley State with new head coach Shawn Gibbs is the surprise SIAC team at 2-0. Chennis Berry’s Tigers of Benedict are the other 2-0 squad.

Winless Miles (0-2) and new head coach Sam Shade is hosting (6 p.m.) what’s sure to be an ornery Valdosta State team (1-1) after its loss to Virginia Union. Defending SIAC champ Albany State (1-1) is at undefeated Shorter (2-0) Saturday at 12 noon.

In addition to Hampton and head coach Robert Prunty of the CAA, Langston of the NAIA Sooner Athletic Conference (SAC) is 2-0. The Lions, led by head coach Quinton Morgan, will host 1-1 Wayland Baptist Saturday (2 p.m.).