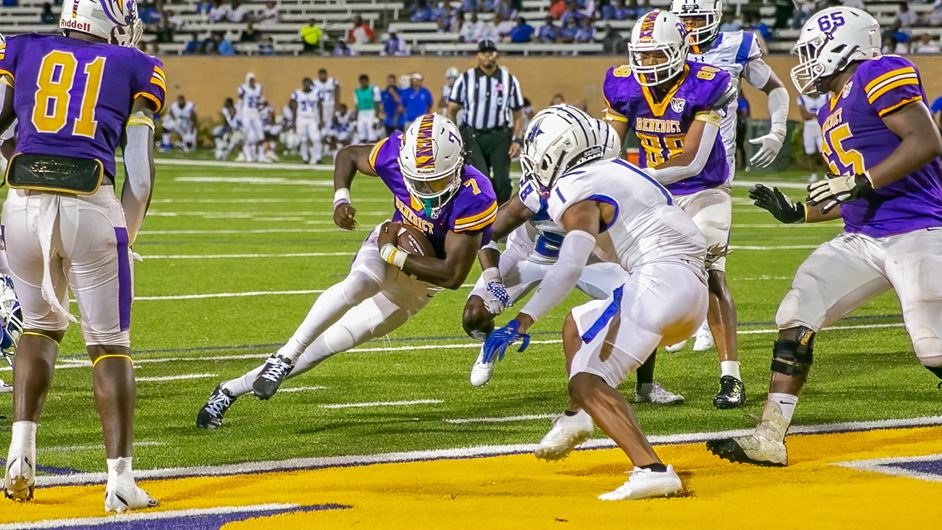 Phoenix got the start and went 14-of-17 for 182 yards and two passing touchdowns to go with one rushing touchdown. Lampley was able to put up a solid stat line of his own finishing the game 7-of-15 for 147 yards, one touchdown and 31 rushing yards.

Benedict head coach Chennis Berry said in the immediate future both quarterbacks will hit the field.

“We’ll take it week by week. Like I said, the evaluation is still ongoing,” he said. “Both of those young men did an amazing job with running our offense so we’ll see how it goes as we continue to go. But right now, they’re both going to play.”

The battle continues to be a tight one as the two share many of the same strengths. Berry said he wants to see sustained consistency from both, but overall both carried out the prime objectives of the position.

“We took care of the football. No turnovers,” he said. “That’s what it’s all about, manage the offense. Put the ball in their playmakers’ hands and they did that. So they did their job. They did a good job of managing and leading our offense and we were able to have a product today and have fruits of our labor.”

The Vikings scored in just 32 seconds during their first possession, but after a long return, Phoenix took his first snaps and responded immediately with a three play, 17-yard drive. He said the focus on the task at hand outweighed any early game nerves.

I feel like everybody gets first game jitters no matter who you play,” he said. “But after that first snap, it’s go time.”

Phoenix noted that when the Tigers are clicking on all cylinders, they are a force to be reckoned with.

“Honestly when healthy, I feel like nobody, no team in the conference can stop us,” he said. “So we do need to eliminate the negatives, we’ll score every drive.”

As far as the quarterback battle goes, Phoenix said he feels playing alongside Lampley has been very beneficial to his overall development.

“Lampley’s a very smart guy. I feel like he’s a good leader,” he said. “He’s helped me grow up a little bit and had taught me how to lead the team better.”

The Tigers hit the road during week two to take on Lane College.