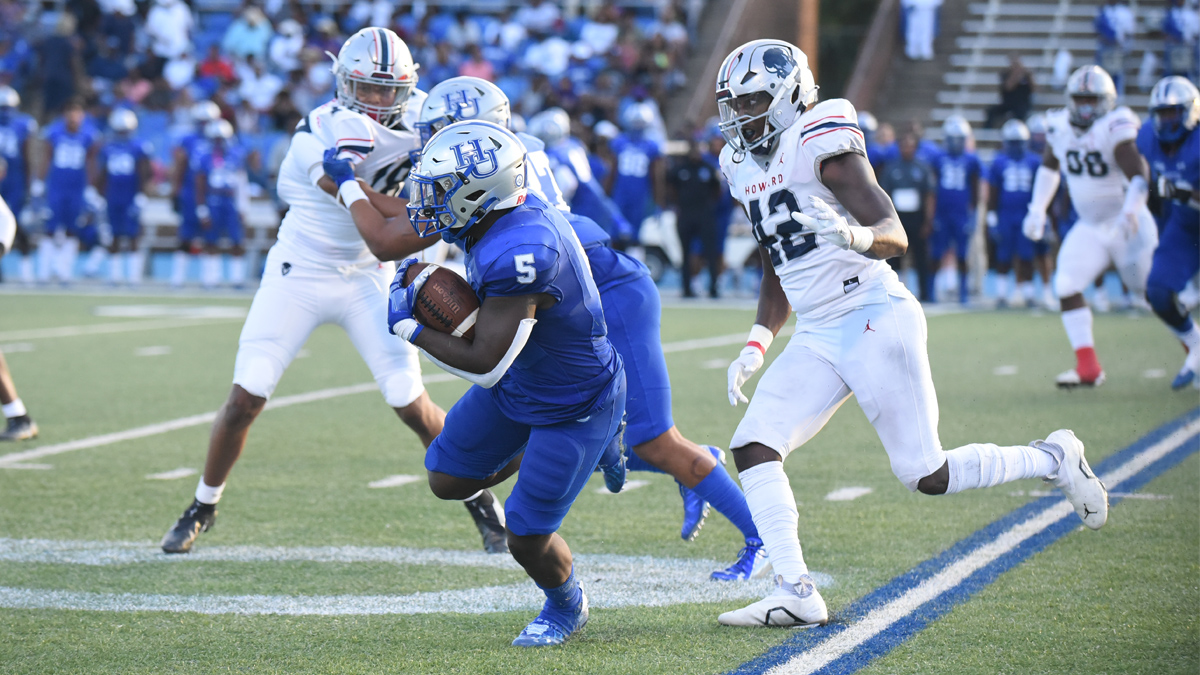 Gastonia, NC native Elijah Burris decided to de-commit from UNC to play at Hampton University. And he’s playing well early in his career.

Hampton University running back Elijah Burris could have been in the ACC. The Gastonia, NC native initially committed to North Carolina as a standout running back out of Mount Island Charter School before landing at the seaside HBCU in Virginia.

“I got to play with people from Gastonia, my hometown. I got to play with Charlotte people too,” Burris said during fall camp at Hampton. “The Charlotte area — they’re very competitive. Their fast, guys got a lot of strength, Same way with Gastonia, it’s just a smaller town we don’t really get recognized alot, but some players do.”

And Burris was one of those players, getting looks from G5 programs like Charlotte and Toledo, as well as Power Five programs such as Nebraska and Wisconsin but ultimately committing to UNC as a junior. He was rated as a three-star prospect and the 44th best prospect in the state by 247 Sports.

He finished his career with 7,515 rushing yards and 106 total touchdowns.

“A kid that size, you think he’s a power back but he can do the scat-back thing,” his high school coach Robert Washington told the Charlotte Observer back in 2019. “He changes directions at the drop of a dime. His vision is remarkable, just reading holes. He sees stuff developing and that’s the sign of a good running back, when you can see things develop.”

So how did Burris decide to de-commit from North Carolina to play for Hampton? He says Antico Dalton, a former defensive end for Hampton who played during the Joe Taylor Era, connected him with Hampton coach Robert Prunty.

“He talked to me about how the school could help me, change me into a better person,” Burris remembers. “I could meet some people — people you want to be around — socialize and everything. So I liked we were talking about and I decided to de-commit from UNC and sign with Hampton.”

That was February of 2020. The COVID-19 pandemic resulted in Hampton sitting out the 2020 season, delaying the start of Burris’ career. But he showed why he was so highly regarded in his freshman campaign in 2021.

Elijah Burris led the Pirates in rushing as a freshman, gaining 640 yards and scoring six touchdowns on the ground in 11 games last fall. He was named Big South Freshman of the Year for his efforts. Heading into the 2022 season, he was named to the watch list for the Deacon Jones Trophy, the award given by the Black College Football Hall of Fame to the top player in HBCU football.

Burris battled injuries during camp and was limited to seven carries in the season-opening win against Howard, but picked up right where he left off in Week Two against Tuskegee, running for 104 yards and a touchdown on 14 attempts.

This week Elijah Burris and Hampton travel 25 minutes down the road to take on arch-rival Norfolk State in the annual “Battle of The Bay.”