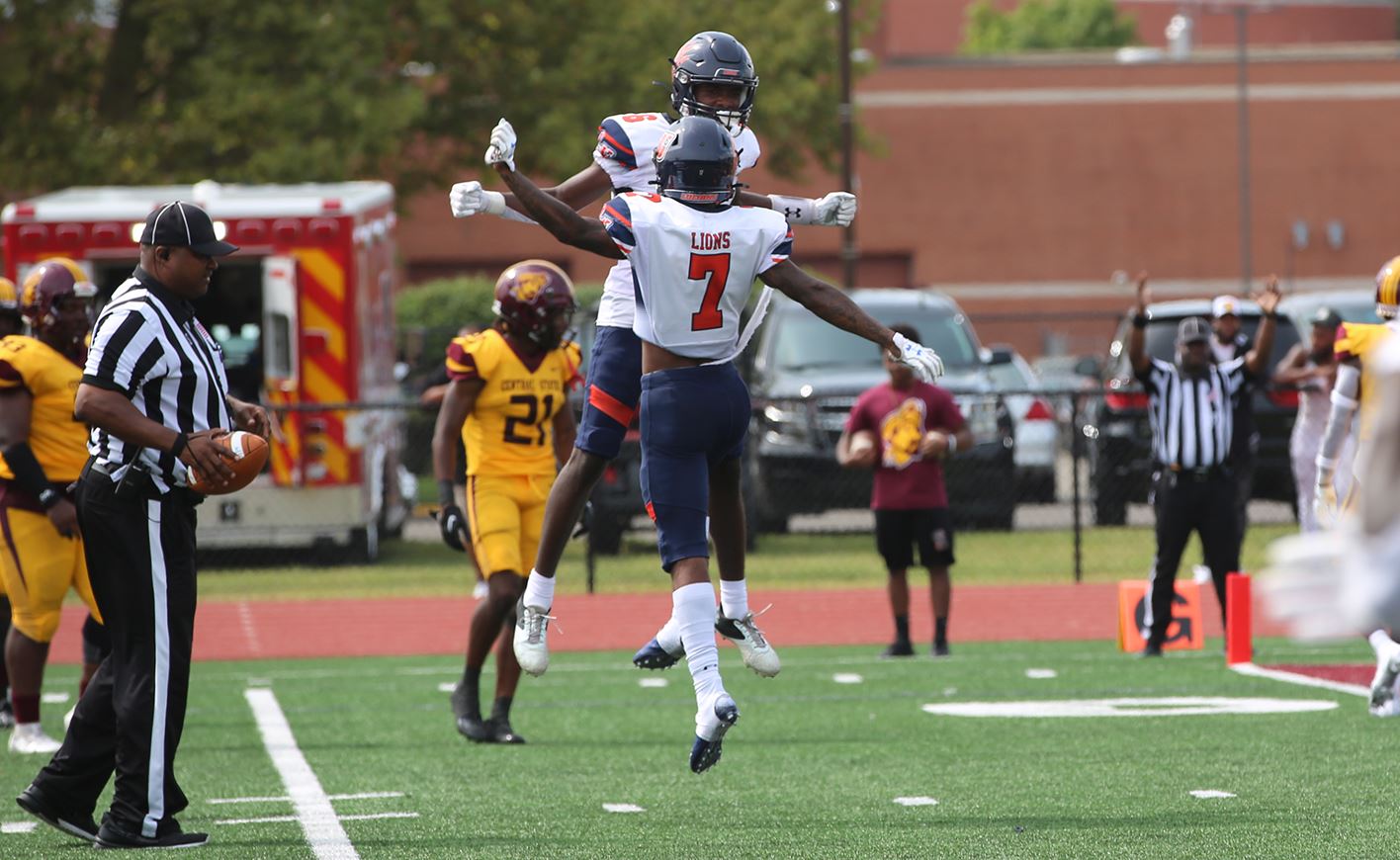 The seven year itch finally gets scratched for the Lincoln(PA) football team.

WILBERFORCE, Ohio – For the first time since 2015, the Lincoln University football team went into someone’s stadium and came out victorious.

Dah’Mear Triplett hauled in a pair of touchdowns with four catches and 96 yards as the Lions claimed the 26-21 non-conference win over Central State Saturday inside McPherson Stadium. All 26 of Lincoln’s points came in the second half.

Lincoln pretty much sealed the victory on a methodical 18-play, 75-yard drive that chewed up 11:53 and culminated with a one-yard touchdown plunge by Andrew Banks (Atlanta, Ga./Mays) on fourth down. The score gave Lincoln the 26-14 lead with less than two minutes remaining.

However, the Marauders had one last gasp.

Aided by a couple of personal foul penalties, Central State marched 60 yards on six plays in just 63 seconds to make things interesting … briefly. The ensuing onside kick didn’t even travel to the required 10 yards, and Lincoln took one knee to seal to victory.

Neither offense could find the end zone in the first half, but the Marauders were able to take a lead into the halftime thanks for a 54-yard punt return with 36 seconds remaining in the second quarter.

It didn’t result in any sweeping momentum changes for the home team as they were suffocated for the entire third quarter. While the defense was pitching a shutout, the offensive machine started to hum. Amir Gerald (Washington, D.C./Woodrow Wilson) scored Lincoln’s first points of the season with a 17-yard touchdown scamper, and with the two-point conversion – the Lions had a lead they wouldn’t surrender.

The Freeman to Triplett connected were responsible for the next two scores as they connected on scoring strikes of 12 and 30 yards. Neither two-point conversion attempt was successful, and with 14:52 left in the fourth quarter, Lincoln led 20-7.

A quick strike by Central State pulled the Marauders to with 20-14, but the aforementioned clock guzzling drive pretty much sealed the win.

Freeman finished with 140 yards on 11-of-23 passing and two touchdowns. He added 70 yards on 12 carries. Samuel Jordon added 47 yards on seven attempts.

For the second game in a row, Mike Johnson (Edgewood, Md./Edgewood) led the team in tackling – finishing with seven stops, a sack and two tackles for loss, while Kentrell Gray added six tackles and one for loss.

Lincoln opens the home portion of its slate 7 p.m. Saturday, hosting CIAA North favorite Fayetteville State. It will be the first home game inside the LU Athletics Stadium since 2019.