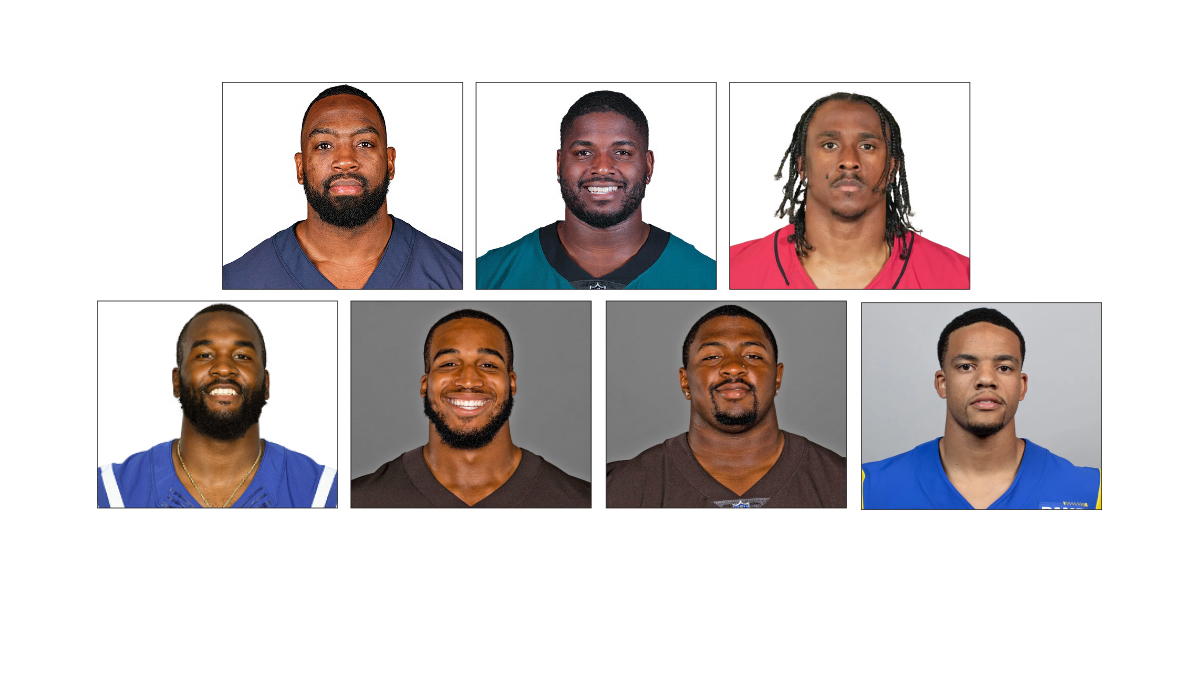 NFL season to kick off with 31 HBCU players

Seven players from SC State – (Top, l. to r.) Joe Thomas, Javon Hargrave and Antonio Hamilton, (bottom l. to r.) Shaquille Leonard, Alex Taylor, Roderick Perry and Decobie Durant – are among 31 HBCU players on NFL rosters as the 2022 season begins Thursday. The Bulldogs have the most HBCU players in the league.

Look for No. 14, rookie defensive back DeCobie “Cobie” Durant out of South Carolina State Thursday (8:20 p.m. EDT on NBC) when his Super Bowl champion LA Rams kick off the 2022 NFL season vs. the Buffalo Bills.

Durant will be one of 31 former HBCU players on NFL rosters. He is also one of 19 that made opening-day 53-man rosters. Ten others were named to practice squads.

That number is up nine from last season when just 22 black college players were on opening-day rosters. It is the first increase of HBCU players in the NFL since 2017. The numbers went from 32 in 2016 to 34 that year.

Durant was drafted by the Rams in the fourth round of this year’s draft. He led SC State to an MEAC title and Celebration Bowl victory in his final year with the Bulldogs. Durant also earned MEAC defensive player of the year honors in 2021. He had a great camp for the Rams.

He has “somehow” even been adopted as a cousin by his namesake, NBA superstar Kevin Durant.

The 2022 HBCU NFL list includes established veterans like Arkansas-Pine Bluff product Terron Armstead. He is the most senior of the former HBCU players entering his tenth year in the league. The three-time SWAC first teamer at UAPB and three-time NFL Pro Bowler spent his first nine years with the New Orleans Saints.

He signed a new five-year $75 million mega deal to join the Miami Dolphins back in March. The deal includes $43.37 million in guaranteed money.

The list of HBCU vets behind Armstead in NFL experience begins with a trio of South Carolina State products. They are linebacker Joe Thomas, defensive tackle Javon Hargrave and defensive back Antonio Hamilton.

Thomas, a former SC State linebacker and 2013 MEAC defensive player of the year, is entering his eighth year in the NFL. After stints with Green Bay, Dallas, Houston and Baltimore, Thomas earned a spot on the practice squad of the Chicago Bears.

It’s unusual for a player with this much longevity in the league to be named to a practice squad. Thomas however proved in the preseason he can be a valuable asset for the Bears at linebacker and on special teams.

Hargrave is entering his third year with Philadelphia and seventh year in the NFL. He played his first four seasons with Pittsburgh, who took him in the third round of the 2016 NFL Draft. He was the league’s highest paid nose tackle when he signed a three-year, $39 million deal with the Eagles in 2020. Hargrave was named to the Pro Bowl in 2021.

Antonio Hamilton, who came out of SC State in 2016 with Hargrave but was undrafted, is also in his seventh season. He has played for five teams – Oakland, the NY Giants, Kansas City, Tampa Bay and now is in his second year with the Arizona Cardinals.

Hamilton, slated to start for Arizona this season, was placed on the reserve/non-football injury after a brutal cooking accident in his home last week. He will miss at least four games. He posted an explanation on Twitter.

The other player on an injured list is NC A&T product Brandon Parker with Las Vegas. The fifth-year offensive lineman has been placed on injured reserve after tearing his triceps while lifting weights. Parker will miss the entire season.

Leonard, who has gone by Darius Leonard in previous seasons, made it known this summer that he would like to be called “Shaquille.” Shaquille is the name he has been known by his whole life.

The other two Bulldogs on NFL rosters are rookie defensive tackle Roderick Perry, who finished his career at Illinois, and second-year offensive lineman Alex Taylor. Both are on Cleveland’s practice squad.

NFL season: The other HBCU rookies

Durant was one of four HBCU players taken in the NFL Draft that are on rosters.

Joshua Williams, the defensive back out of Fayetteville State taken in the fourth round by Kansas City and Ja’Tyre Carter out of Southern, who went to Chicago in the seventh round, are on their teams’ active rosters. Former Jackson State linebacker James Houston, taken in the sixth round by Detroit, is on the Lions’ practice squad.

Perhaps the biggest surprise of those on active rosters is Norfolk State undrafted rookie free agent De’Shaan Dixon. Dixon, who led the Mid Eastern Athletics Conference with nine sacks a year ago, was so impressive in the preseason that he was signed to the Jacksonville Jaguars opening-day roster. It was the same for undrafted rookie Markquese Bell out of Florida A&M who made the active roster for Dallas.

Two North Carolina A&T products had roller coaster rides when the teams got down to 53 last Tuesday. Former MEAC Defensive Player of the Year for the Aggies, defensive end Darryl Johnson Jr., was waived by Carolina and signed to Seattle’s active roster.

Former A&T defensive back Mac McCain III was waived by Philadelphia but signed this week to the Eagles’ practice squad. Offensive tackle Kion Smith out of Fayetteville State was waived and then signed to Miami’s practice squad. McCain and Smith were the last two transactions this week involving HBCU players.

NFL season: The other numbers

Offensive lineman continues to be the position manned most by former HBCU players. There are currently 10 lineman in the league. Defensive backs (7) and defensive linemen (6) are next. Cleveland has the most HBCU players with four, all on the Browns’ practice squad.

NFL season to kick off with 31 HBCU players