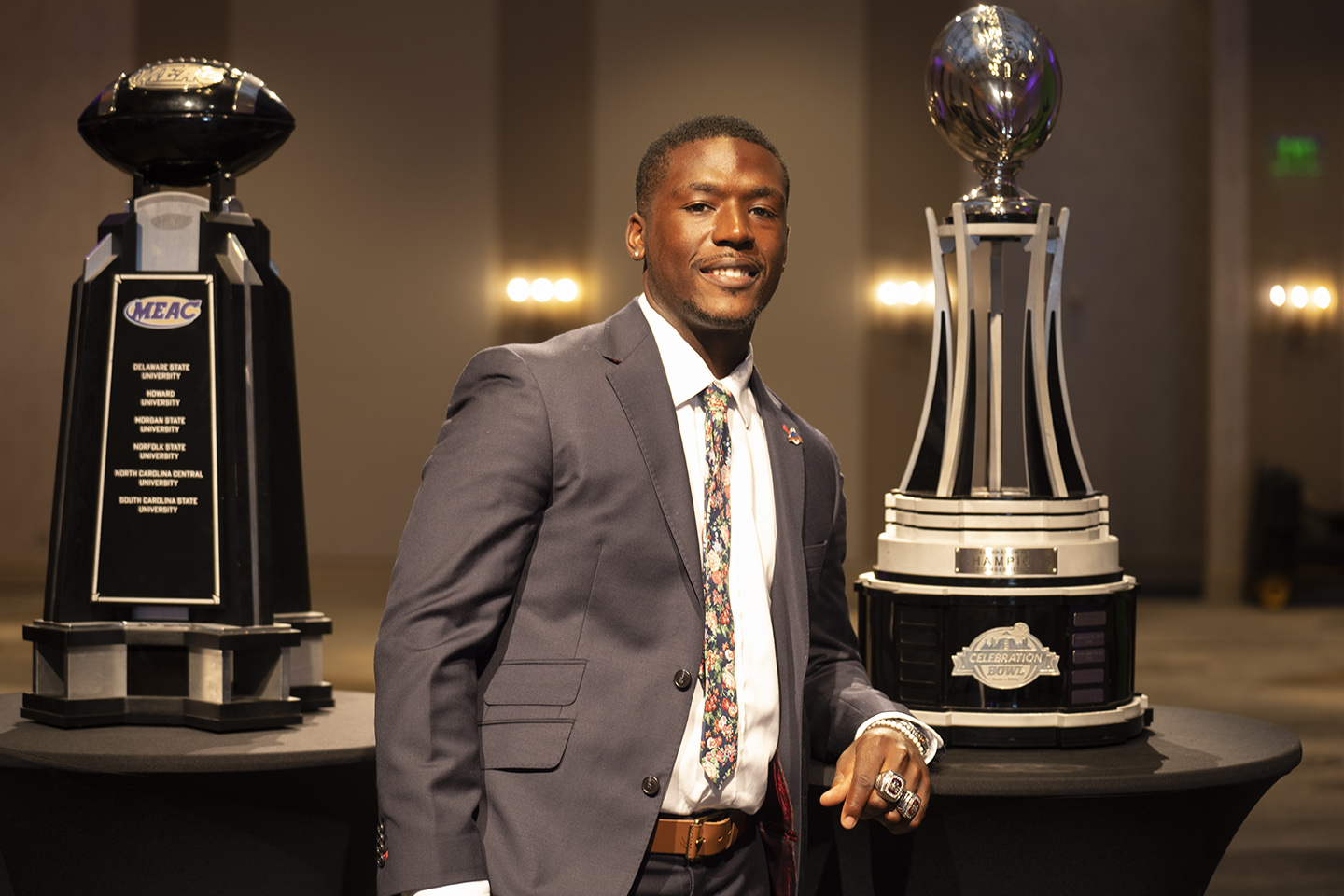 SC State faces tall task on the road at UCF

SC State QB Corey Fields Jr. poses with the MEAC and Celebration Bowl Trophies from the 2021 season. Head coach Buddy Pough said those victories are behind them as the Bulldogs face their toughest schedule ever. It begins Thursday night at Central Florida.

The buzz from winning the MEAC and then shocking and knocking off SWAC champion Jackson State in the Celebration Bowl is still reverberating among the Bulldog faithful, head coach Buddy Pough said at Monday’s MEAC Coaches Teleconference. But the dean of HBCU coaches entering his 21st year leading the Bulldogs said it is time to put that behind them.

“We’re proud of what we’ve done, but that’s over,” he said. “I got a chance to look at the schedule we’ve got in front of us now and that’s a sobering kind of experience just watching who we play in the coming month. I guarantee that championship is out of our system.

“People want us to be sitting around talking about what we used to be. We’re right now in the process of trying to get ready for one of the toughest seasons we’ve ever had here.”

First up on that schedule is Central Florida, a team that went 9-4 overall in 2021, 5-3 in the American Athletic Conference. The Knights, led by former Auburn coach Gus Malzahn, capped their season with a 29-17 win over Florida of the SEC in the Gasparilla Bowl. The Knights were 7-0 at home in Orlando, Fla.

UCF has six players on the Senior Bowl Watch List. They include senior transfer quarterback John Rhys Plumlee, who has come over from Ole Miss. Plumlee played wide receiver the last two years for the Rebels after setting a freshman rushing record with five 100-yard games at quarterback.

The best feature about SC State’s championships in 2021 is that they were relatively young. They still are. Pough returns nine starters on offense and nine on defense. His team finished 7-5 last season, undefeated at 5-0 in MEAC play.

Graduate senior quarterback Corey Fields Jr. (181-365-13 ints., 2,310 yds. 18 TDs) returns. He struggled some with accuracy last season but had perhaps his best game at the Celebration Bowl in Atlanta. He threw a season-high four touchdown passes in the 31-10 stunner over Jackson State.

As a freshman transfer from Wake Forest, running back Kendrell Flowers ran for 857 yards and 10 TDs a year ago. He and back-up Alex James will run behind an offensive line that returns four starters.

The defense was the real star of the Bowl game win. It chased and harassed JSU quarterback Shedeur Sanders, the son of Tigers’ head coach Deion “Coach Prime Sanders, all day. The 2021 Jerry Rice Award winner as the top freshman in FCS football completed just 16 of 36 passes for 175 yards, threw two picks and coughed up one fumble. The Bulldog defense sacked Sanders three times and had six tackles for losses.

Most of the stars of that unit return.

Off to the NFL is defensive captain DeCobie “Cobie” Durant who was taken by the Super Bowl champion LA Rams in the fourth round of this year’s draft. Durant was named to the Rams 53-man roster Tuesday.

Perhaps no one had a better day at the Celebration Bowl than punter Tyson Roberts. The freshman averaged 49.2 yards on eight punts including a 74-yarder to keep JSU backed up. He also had a touchdown-saving shoestring tackle on a punt return.

“We think we got a good little team here,” Pough said.

The preparation has been somewhat “conflicted,” Pough said. He wanted to prepare his team for the Florida heat by practicing in the hottest parts of the day. Trainers didn’t allow it.

Malzahn likes to run an uptempo offense that could get off 100 snaps a game. It will involve a lot of misdirection and trickery. Conditioning will be key, Pough said.

“We’re going to take as many guys as possible. Everybody that gets on that bus is going to be a guy that can do something to help. We won’t have any freeloaders on that deal.

“We’ve gotta be sound fundamentally on defense, reading our keys, reading the defensive fronts kind of stuff instead of looking at what’s going on in the backfield.”

“We came out of the first five games 1-4 last year but I don’t want to doggone make that a method to go on and win a national championship,” Pough said. “Yeah, we did that but it was a hard, hard, hard deal. And it’s hard to keep a team focused and still confident when you’re 1 and 4.

SC State faces tall task on the road at UCF