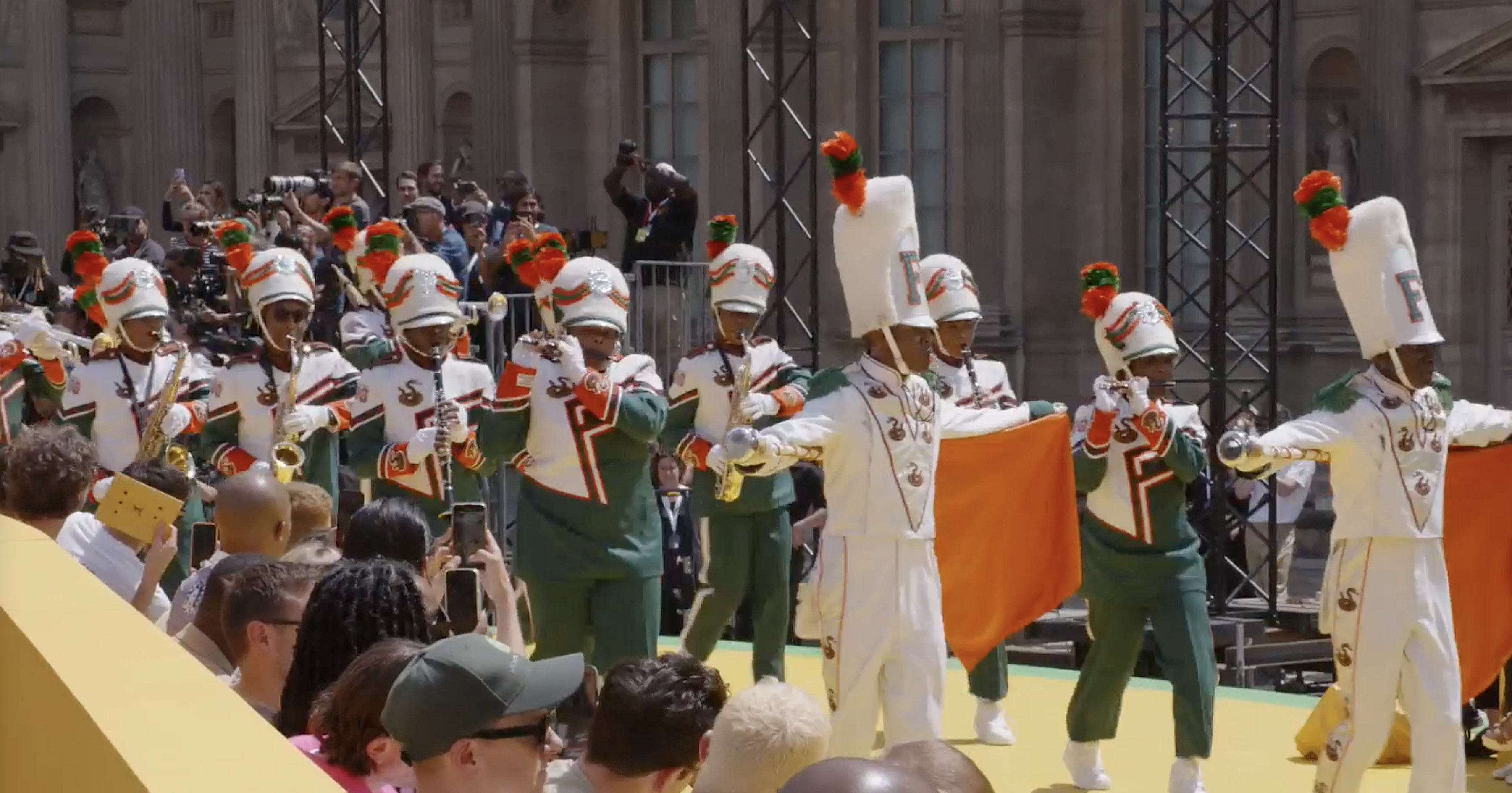 Thursday’s performance was the second in Paris for the Marching 100.

It was everything it was made out to be.  The first ten minutes of the Louis Vuitton 2023 Spring and Summer Men’s Fashion Show at the Louvre in Paris, France was all FAMU Marching 100.  Initially they were to be outfitted with Louis Vuitton attire, but to the delight of the band, they were allowed to wear their trademark orange and green uniforms purchased by FAMU grads Bernard and Shirley Kinsey.

A dramatic movie opened the show with a young man, who would turn out to be the first model, going through something looking for an escape.  He would toy with the Marching 100 going in and out of different rooms with different scenarios. They ended up on the roof where the Marching 100 surrounded him.  He would get on a spaceship and blast off.  From there, it was all a FAMU Marching 100 trademark performance.

The Marching 100 did what they normally do and that was exactly why they were chosen by Louis Vuitton.  In a very-highly produced international event, the most accomplished of HBCU marching bands displayed why they have been chosen to perform at unique events of this nature.  They opened with the trademark drum cadence titled “Prelude” that follows the “Slow One” field entrance.  They then marched around the winding yellow runway.

Marching down The Yellow Brick Road

Performing “Get Up For the Rattlers” was a major shout out to Florida A&M University.  In the traditional form, they played the verse and chorus and then sang the second verse…right on the “yellow brick road.”  The walkway for the Louis Vuitton Fashion Show appeared as the yellow brick road in the Wizard of Oz.  The long winding structure was made to accent the outfits worn by the models.  The band also performed “Mighty Rattler.”

Production for the event, as expected, was off the charts.  Steadicams, pole mounted jib cameras and drones were used to capture all the action.  You could see the band from every view imaginable.

Former FAMU drum major Victor Gaines was proud to see the band in Paris again.  He traveled with the Rattlers to Paris in 1989 for the Bastille Day Celebration.

The Marching 100 was given the opportunity to walk the entire runway, which was probably a quarter mile long, and perform their traditional songs.  Thirty five of the most talented musicians in the band proudly did what normally 300 members would do.  They interacted with the crowd along the way.

Stars in the crowd

In that crowd was Kendrick Lamar.  Lamar performed during the models’ parade of the runway.  With about 50 new looks, the tall slender male Louis Vuitton models strutted the length of the runway.  Sitting next to Lamar was Supermodel Naomi Campbell.  She took in the activities as she has graced the runway for Louis Vuitton several times over the years.  She can be seen recording the Marching 100 on her phone as they passed, while Lamar was bopping to the bands’ music.

In one of FAMU’s most recognizable performances, the Marching 100 played S.O.S. by the S.O.S. Band.  This is a FAMU student favorite as the students have made a stroll to the song.  You could just imagine the pride of the students watching and hearing their song.

“I don’t even think words can express how proud I was.  It came on as soon as I got to work and I am amazed at what they were able to do.  I had a bit of an emotional moment there, it meant that much.  This was a different type of show, but seeing them in uniform and doing the routines like professionals was great.  I’m still letting it sink in,” Gaines added.